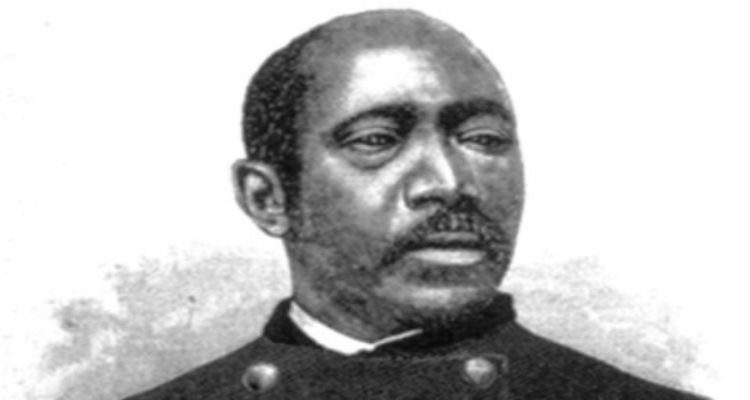 Every people should be originators of their own destiny.

Delany was born in Charles Town, West Virginia, the son of an enslaved father and a free mother. He is reputed to have believed that he was descended from African royalty, and this may have influenced his later activities as a founder of Black Nationalism and advocate of emigration to Africa. Delany’s mother took her children to Chamersburg, Pennsylvania in 1822, after facing racial problems in Charles Town. When his mother, Pati, taught him and his siblings to read and write, they were cited for violating state laws against literacy instruction for black children. Mrs. Delany quickly moved the family so her children could continue their studies without interference.

Delany was educated in Chamersburg until 1827, when he had to go to work. Four years later he left for Pittsburg, walking the entire way, which was his home for the next twenty five years. When he arrived in Pittsburg, Delany became a student at a school operated by the Rev. Lewis Woodson of the African Methodist Episcopal Church. Rev. Woodson, who would go on to help establish Wilberforce University, was a strong advocate of Black economic independence and was active in the Underground Railroad, which helped fugitives escape to freedom in Canada. In 1833 Delany began an apprenticeship with a Pittsburgh physician and soon opened a successful medical practice in cupping and leeching (it was not necessary to be certified to practice medicine prior to 1850).

Delany also established himself as a leader and advocate for Blacks in Pittsburg. Involved in the Underground Railroad himself, he established an abolitionist newspaper, The Mystery, in or around 1843, said to be the first Black newspaper west of the Alleghenies. The Mystery was published for four years in Pittsburgh, and was one of the only papers to survive a devastating fire in 1845 that destroyed a third of the city. A year after the fire, Frederick Douglass came to Pittsburgh, to persuade Delany, to become co-editor of his new newspaper, The North Star. They used the newspaper to speak out against slavery and oppression.

Delany and Douglass never worked in an office together. Instead, Delany went on a “western tour” to Ohio and Michigan to recruit subscribers, and sent a series of travelogue-style letters that were printed in The North Star. In a letter, he recounted how he and a companion were chased by a whyte mob in Marseilles, Ohio, northwest of Columbus. Retreating to their hotel, they watched as the mob started a bonfire and threatened their lives. “Then came the most horrible howling and yelling, cursing and blasphemy, every disparaging, reproachful, degrading, vile and vulgar epithet that could be conceived by the most vitiated imaginations,” Delany wrote, “which bedlam of shocking disregard was kept up from nine until one o’clock at night …” With the hotel’s proprietor refusing to let the mob in, Delany was able to wait the crisis out and slip away the next day.

By the end of his tour, it was already clear that Delany and Douglass were about to part ways on The North Star. Robert Levine, a University of Maryland English professor who wrote a book about the two men, said that by the late 1840s, Delany was accustomed to being a leader, but “as co-editor of The North Star, he was suddenly cast in Douglass’ shadow.” The decisive break came when Delany began to advocate Black emigration at a time when Douglass was still preaching the need for free blacks to continue the anti-slavery battle in America. Thus the editorial alliance of the two men lasted only 18 months. But from the time of their first meeting, Douglass and Delany would remain lifelong friends — and often bitter rivals.

Douglass is quoted as saying, “I wake up each morning and say, thank God I am a man, whereas Delany wakes up and says thank God I am a black man.” Delany also “attempted to use [his black heritage] to say to Black people that he would be a better leader because people can’t say that his intelligence has anything to do with European blood, as compared to Douglass who was mixed race.

Delany entered Harvard Medical School in 1850 to finish his formal medical education (along with two other Black students) but left after one semester because of the protest of Euro-American students; he gave himself the title of “doctor” and did indeed practice medicine in Pittsburg. In 1852, Delany published the first, full length statement of black nationalism, The Condition, Elevation, Emigration, and Destiny of the Colored People of the United States, Politically Considered, claiming that even abolitionists would never accept Blacks as equals and thus the solution to the Black condition lay in the emigration of all African Americans back to Africa.

In his book, Delany wrote:

“Let no visionary nonsense about habeas corpus, or a fair trial, deceive us; there are no such rights granted in this bill, and except where the commissioner is too ignorant to understand, when reading it, or too stupid to enforce it when he does understand, there is no earthly chance, no hope under heaven for the colored person who is brought before one of these officers of the law.

“We are slaves in the midst of freedom, waiting patiently and unconcernedly, indifferently, and stupidly, for masters to come and lay claim to us, trusting to their generosity, whether or not they will own us and carry us into endless bondage.”

Over the next 15 years, Delany argued strongly for emigration, first to Central or South America, later to Africa. He made two trips to Africa to negotiate for possible land for settlements along the Niger River, “We are a nation within a nation, we must go from our oppressors,” he wrote. However, none of his plans for Blacks to leave the United States came to fruition, and in 1856, he moved to Canada, where he would stay until after the Civil War began.

The outbreak of the Civil War brought Delany back to the United States where he focused on the war rather than exile. Delany moved to Wilbeforce, Ohio in 1864. It was at this time that he advanced a plan to recruit Black troops commanded by Black officers to fight for the Union Army.meeting with President Abraham Lincoln to persuade the administration to create an all-Black Corps led by African American officers, Delany was commissioned a Major in the 52nd U.S. Colored Troops Regiment. With that appointment he became the first line officer in U.S. Army history. The war ended before is plan could be put into effect.

When Reconstruction began Delany was assigned to the Freedman’s Bureau in South Carolina, where he helped emancipated Blacks get jobs and encouraged some of them to emigrate to Liberia in Africa. He remained there until he ended his army career in 1868. He transferred his attention to politics and became active in local Republican politics, losing a close election for Lieutenant Governor of South Carolina but later serving briefly as a judge in Charleston, South Carolina. As the Republicans lost power in the state Delany renewed his calls for emigration, becoming in 1878 an official in the Liberian Exodus Joint Stock Steamship Company. He also wrote in 1879 The Principia of Ethnology, a book that argued for race pride and purity.

In 1880 Delany withdrew from the Liberian Exodus Company and moved first to Boston, Massachusetts and then to Wilberforce College in Xenia, Ohio. Martin R. Delany, considered by many as the “father of black nationalism,” died in Xenia, Ohio on January 12, 1885.

Thank you for making available such important information about our heritage.

Outstanding. Thank you, thank you, thank you. These heroic men and women whose gifts should be shared with ALL people, worldwide, especially throughout the diaspora. I share these yearly at my church’s Black History program – a Kwanzaa celebration of our culture. God’s blessings for your continued efforts.