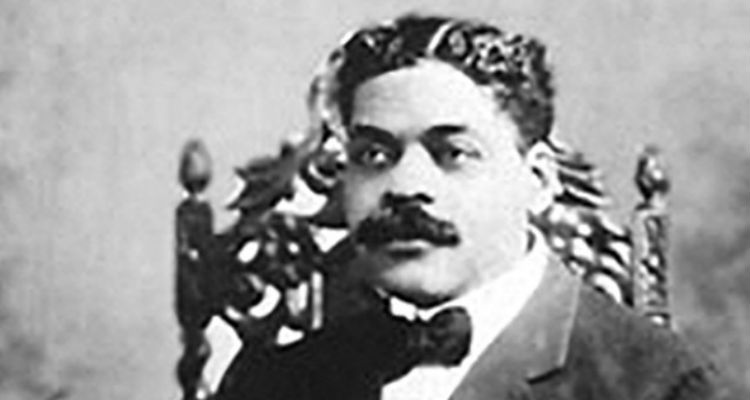 [dropcap size=small]A[/dropcap]rthur Schomburg was a Puerto Rican historian, writer, and activist in the United States who researched and raised awareness of the great contributions that Afro-Latino Americans and African-Americans have made to society. Schomburg’s belief that “history must restore what slavery took away” led to his collecting one of the world’s largest libraries of African American books, prints, and artifacts. The Schomburg Center for Research in Black Culture at the New York Public Library (NYPL) branch in Harlem, was named in his honor.

Schomburg was born on January 24, 1874, in the town of Santurce, Puerto Rico (now part of San Juan), and baptized Arturo Alfonso four days later (he later changed name to Arthur). His mother, a Black woman, was originally from St. Croix, Danish Virgin Islands (now the U.S. Virgin Islands), and his father was a Puerto Rican of German ancestry. It is said, that while Schomburg was in grade school, one of his teachers claimed that “Black people had no history, heroes or no great moments. Inspired to prove the teacher wrong, Schomburg dedicated his life to documenting the accomplishments of Africans on their own continent and in the diaspora.

Schomburg immigrated to New York on April 17, 1891, and settled in the Harlem section of Manhattan. After experiencing racial discrimination in the US, he began calling himself “Afroborinqueño” which means “Afro-Puerto Rican”. Schomburg was very active in the liberation movements of Puerto Rico and Cuba. He joined Los Independientes, a club actively devoted to aiding Puerto Rico’s movement for independence. Not yet 17, he began attending night school at Manhattan Central High School while working such jobs as an elevator operator, a bellhop, a printer, and a porter. Schomburg was present at the meeting when the Cuban Revolutionary Party (Partido Revolucionario Cubano) was founded by José Marti. Within a few months Schomburg helped to organize Las Dos Antillas (The Two Islands) and served as secretary of the group. The club pledged “actively to assist in the independence of Cuba and Puerto Rico,” vowing to remain an active organization until both regions attained their independence. Schomburg used the pen name “Guarionex” for his writings during this time.

In spring of 1892, Schomburg went to New Orleans on Las Dos Antillas business. There he came into contact with his first African American community. After José Marti’s death in 1895, and the disbanding of the Cuban Revolutionary Party in 1898, Schomburg, disillusioned, turned his attention to the Black freedom movement in the United States. At this time he adopted the Anglicized spelling of his name. His shifting loyalties were also due to his marriage to Elizabeth (Bessie) Hatcher in 1895, and the birth of their three sons: Maximo Gomez; Arthur Alfonso, Jr. and Kingsley Guarionex Schomburg. After Elizabeth died in 1900, Schomburg married Elizabeth Morrow Taylor in 1902, and had two sons: Reginald Stanton and Nathaniel José Schomburg.

After Elizabeth Taylor’s death, Schomburg frequently visited his five sons who were living with relatives in the South. There, he became exposed to the African American experience, enduring the indignity and humiliation of segregated ‘Jim Crow’ facilities. He had also become an initiate in the craft of freemasonry in 1892, and met his life-long friend, the bibliophile and fellow Mason, John Edward Bruce. Over the course of his friendship with John Edward Bruce, who had been born into the Maafa (Atlantic slavery) in 1856, Schomburg began learning, through Bruce’s first-hand accounts, the history of the enslaved Africans in the United States.

In 1896, Schomburg began teaching Spanish in New York. From 1901 to 1906 he was employed as messenger and clerk in the law firm of Pryor, Mellis and Harris, New York City. In 1906, he began working for the Bankers Trust Company. Later, he became a supervisor of the Caribbean and Latin American Mail Section, and held that until he left in 1929. While supporting himself and his family (three more children were born to Schomburg and his third wife, Elizabeth Green), Schomburg began his intellectual work of writing about Caribbean and African-American history. His first known article, “Is Hayti Decadent?”, was published in 1904 in The Unique Advertiser. In 1909 he wrote Placido, a Cuban Martyr, a short pamphlet about the poet and independence fighter Gabriel de la Concepción Valdés.

In 1911, Schomburg co-founded with John Edward Bruce the Negro Society for Historical Research, to create an institute to support scholarly efforts. For the first time it brought together African, African-Caribbean and African-American scholars. Schomburg was later to become the President of the American Negro Academy, founded in Washington, DC in 1874, which championed Black history and literature.

Schomburg became involved in the Harlem Renaissance movement, which spread to other African-American communities in the U.S. The concentration of Blacks in Harlem from across the US and Caribbean led to a flowering of arts, intellectual and political movements. He was the co-editor of the 1912 edition of Daniel Alexander Payne Murray’s Encyclopedia of the Colored Race. In 1916 Schomburg published what was the first notable bibliography of African-American poetry, A Bibliographical Checklist of American Negro Poetry.

In March 1925 Schomburg published his essay “The Negro Digs Up His Past” in an issue of Survey Graphic devoted to the intellectual life of Harlem. It had widespread distribution and influence. The historian John Henrik Clarke told of being so inspired by the essay that at the age of 17 he left home in Columbus, Georgia, to seek out Schomburg to further his studies in African history.

In an interview with Civil Rights Journal, Clarke described his first encounter with the man who “opened up my eyes to the fact that I came from a old people, older than slavery, older than the people who oppressed us.”

“He was holding down the desk. I was a teenager then. So I wanted to know the whole history of my people all over the world, henceforth, in the hour of his lunch hour!

‘Sit down, son,’ he said. ‘What you’re calling African history, Negro history, are the missing pages of World history. Read the history of the people who took you out of history, and you will find out why they were so insecure they had to take you out of history, why they could not stand for your history to compete with theirs.’

“Once I began to have some background in European history, I could bring African history into proper focus. But Arthur Schomburg, more than any other single human being, set me in motion in the pursuit of a career as a teacher of history.”

By the 1920s Schomburg had amassed a collection which consisted of artworks, manuscripts, rare books, captivity narratives and other artifacts of Black history. In 1926 the New York Public Library purchased his collection for $10,000 with the help of a grant from the Carnegie Corporation. The collection formed the cornerstone of the Library’s Division of Black History at its 135th Street Branch in Harlem. The library appointed Schomburg curator of the collection, which was named in his honor: the Schomburg Center for Research in Black Culture. Schomburg used his proceeds from the sale to fund travel to Spain, France, Germany and England, to seek out more pieces of Black history to add to the collection.

Between 1931 and 1932 Schomburg served as Curator of the Black Collection at the library of Fisk University, Nashville, Tennessee, helping direct their acquisition of materials. During 1932 he traveled to Cuba. While there he met various Cuban artists and writers, and acquired more material for his studies. He was granted an honorary membership of the Men’s Business Club in Yonkers, New York. He also held the position of treasurer for the Loyal Sons of Africa in New York and was elevated being the past master of Prince Hall Lodge Number 38, Free and Accepted Masons (F.A.M.) and Rising Sun Chapter Number 4, R.A.M.

To honor Schomburg, Hampshire College awards a $30,000 merit-based scholarship in his name for students who “demonstrate promise in the areas of strong academic performance and leadership at Hampshire College and in the community.”

Today, the Schomburg Center for Research in Black Culture of The New York Public Library is one of the foremost research centers on Africa and the Diaspora, with more than 10 million items.