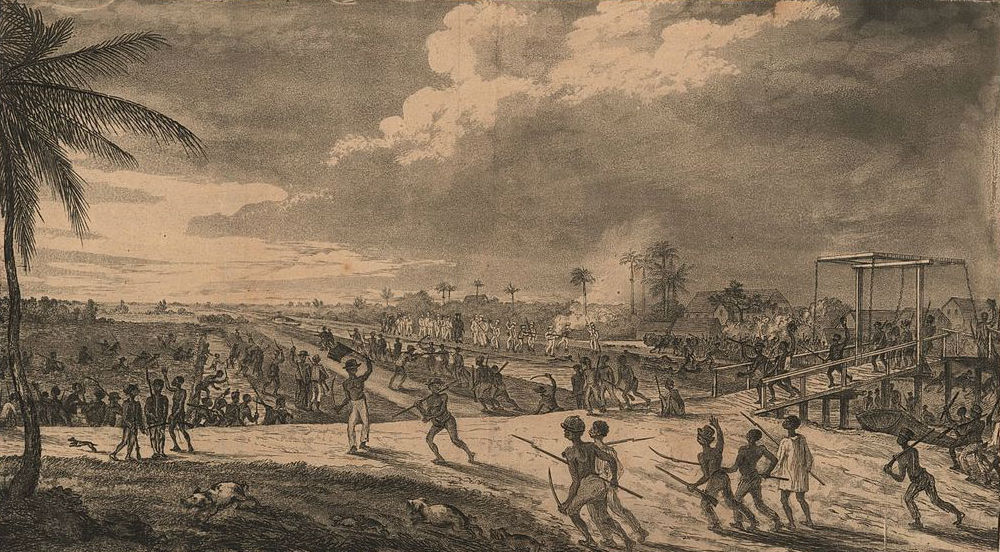 The Demerara revolt of 1823 was by far the largest uprising in Guyanese history and one of the largest revolts in Caribbean history. Only the Haitian Revolution and the Jamaican “Baptist War” of 1831 had larger numbers of warriors. The uprising took place on August 18, 1823, and lasted two days.

Demerara was the most productive of the three British colonies in British Guiana (Guyana)–the others being Berbice and Essequibo–which had been taken from the Dutch at the beginning of the nineteenth century. In Demerara, the colonizers were heavily committed to sugar production, and conditions for Atlantians (enslaved people) were extremely hard and inhuman. They had to work from 6.30 in the morning until 9 at night, with very few breaks.

In 1823, Bathurst, the then minister at the Colonial Office, drew up a series of recommendations for improving the Atlantians’ lives (known as the ‘amelioration proposals’). The proposals were received very badly by the local European community, and so much talked about that they quickly came to the attention of the Atlantians. Troubled by a proclamation the governor had issued restricting their access to Sunday mass, the separation of families by sale, the punishment many endured from plantation managers who felt they were too Christian, and incited by rumours that Britain had already decreed emancipation which was being covered up by the enslavers, some 12,000 Atlantians (most of them Christians) took up arms to demand what they thought was their rights.

Planning for the uprising began on August 17, 1823, at Plantation Success, one of the largest estates in the area. Jack Gladstone, Joseph Packwood and Manuel, assumed leadership of the group. Gladstone’s father, Quamina, who arrived at the meeting later, objected to any bloody revolt and suggested that they should go on strike. The plan was to seize all guns on the plantations, lock up their oppressors during the night and then go to the Governor the following morning to bring the “new law.” Quamina implored them not to be violent in the process.

But on the morning of Monday 18 August, the plan was leaked by Joseph Packwood. Packwood, was a domestic Atlantian and he revealed the plan to his enslaver, John Simpson, of Le Reduit plantation. Simpson immediately gave this information to Governor Murray who with a group of soldiers rode up to the area of Le Ressouvenir and La Bonne Intention where he met a large group of armed Atlantians on the road. Murray asked them what they wanted and they replied, “Our right.” He then ordered them to surrender their weapons, but after they refused he warned that their disobedience would cause them to lose whatever new benefits the new regulations aimed to provide. Further, Murray asked them to go home and to meet with him at Plantation Felicity the next morning, but they bluntly refused this invitation.

That night the resistant warriors seized and locked up the plantation slaveholders, managers and their families on thirty-seven plantations between Georgetown and Mahaica in East Demerara. They searched their houses for weapons and ammunition, but there was very little violence. Subsequent court testimonies and statements revealed that they were convinced that they had Britain’s support, and therefore sought to make it non-violent. Europeans were not massacred, although two or three were killed, some were beaten, insulted and put on the block.

At the time of the Demerara uprising, Europeans accounted for only 4 percent of the population. Free Blacks made up another 4 percent and Atlantians made up the rest. In effect, there was 23 Atlantians to each European. Even so, the colonizers were able to brutally crushed the uprising with a military force 400 to 500 soldiers under the command of Lieutenant-Colonel Leahy. The resistant warriors were mainly armed with sticks, cutlasses and bayonets on poles and a small number of rifles captured from plantations.

Many warriors were killed in the first encounters. On Bachelor’s Adventure Plantation, approximately two thousand Atlantians confronted Leahy and his militia. When they refused Leahy’s order to disperse, he commanded his troops to fire into the crowd. Approximately 200 people were shot dead. The massacre sparked a turning point in the uprising, leading to a drop in the warriors’ morale, as well as desertion. To instill fear and crush the uprising more speedily, 20 warriors were summarily tried on the plantations and executed by the soldiers on the spot. Once shot, they were decapitated and their heads were put on poles at plantation entrances or along the road. In this savage crushing military action more than 250 were killed. A report prepared by Governor Murray praised Leahy and his troops and noted that only one soldier was slightly injured while “100 to 150” [Atlantians] were shot dead.

72 alleged ringleaders were tried, with 51 condemned to death (only 33 were effectively executed; the remainder had their sentences commuted to flogging (receiving a thousand lashes) or deportation with forced labour). The executed Atlantians’ bodies were displayed in public for months afterwards as a deterrent to others.

Fearing that fugitives might incite another uprising, expeditions into the plantation backlands were organized in search of escaped warriors. They were hunted down and shot by Amerindian slave-catchers and some traitorous Atlantians (who were rewarded by being released or paid in cash). Quamina himself, who had argued against the revolt, was tracked down by dogs and Amerindian slave-catchers. He was murdered on 16 September and his body was later publicly hanged by the side of the public road at Success plantation. Jack Gladstone was later arrested and also sentenced to be hanged; however, his sentence was commuted and he was sold and deported to St. Lucia.

John Smith, a young British protestant minister who ran the chapel that Quamina attended, was blamed for the slave revolt. He was arrested and condemned to be hang but with a recommendation for clemency. Smith was later pardoned by the King George lV on condition that he immediately be repatriated to Britain. However, by the time the message reached Demerara, Smith had died from pulmonary tuberculosis and the hardships he had endured in prison. His death created a great deal of anger in Britain, giving rise to several parliamentary inquires. Smith was praised in newspapers and his ordeal seemed more important than the death of 200 Atlantians. It was he and not Quamina who was awarded the title “Demerara Martyr.”