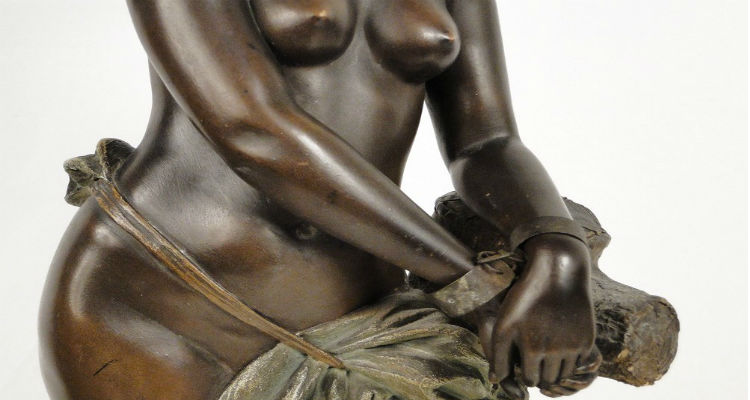 Chloe Cooley was a young enslaved Black woman in Canada during the late 1700s. On March 14, 1793 she was sold against her will, back into the Maafa (Atlantic slavery) in America to a new enslaver and was never seen again.

Chloe Cooley was in bondage to a European enslaver named William Vrooman, a loyalist who had fled to Canada after the American Revolution. In 1793, Governor John Graves Simcoe put forth a complicated piece of legislation, making it illegal for anyone coming into the country to enslave others and ruled that anyone currently enslaved, born to a mother who was enslaved would be freed at the age of 25.

Vrooman feared that he would have to set Cooley free one day. Thus on March 14, 1793 he sold her against her will across the river to America where the Maafa was still legal. While the anti-Maafa bill was still being debated, Cooley was beaten, tied up and forced into a small boat. Vrooman rowed her across the Niagara River despite her screams. When they reached the American side, Cooley continued to scream violently and struggled as she was handed over to a new enslaver. After she was sold, she was never seen again.

Peter Martin, a free Black and former soldier, witnessed the incident, and brought it to the attention of Governor Simcoe who immediately moved to abolish the Maafa in the new province. Though many members, including Simcoe, were reportedly shocked at the treatment of Cooley, her abduction took place in the early evening. None of the European men “appalled” with the incident had heeded her screams for help or attempted to stop her or Vrooman.

While initially calling for the arrest of the man who had sold Cooley, charges were soon dropped because a case could not be made against Vrooman as the Maafa was not recognized under English civil law. In other words, Chloe Cooley had no rights that Vrooman was bound to respect, and she could be sold and treated as any other piece of property.

The Chloe Cooley incident is just one example of the endless instances of violence experienced by women and men who were enslaved in Canada. It is now credited with being a driving force behind the enactment of Canada’s first and only anti-Maafa legislation the Slave Act of 1793. The Maafa would continue to be legal until it was abolished by the British Empire in 1830.