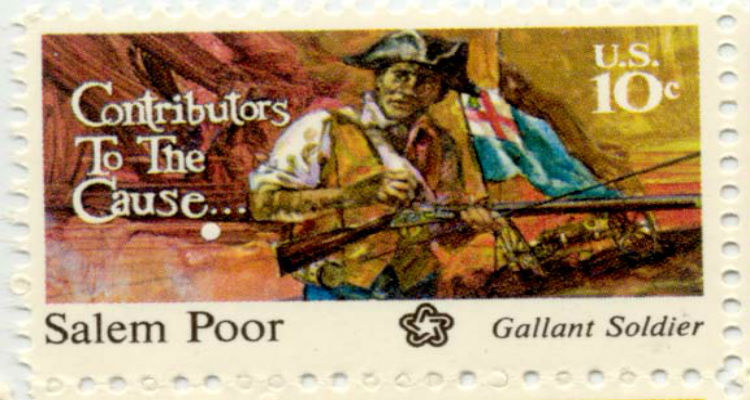 Salem Poor was a distinguished military hero during the American Revolutionary War. He is best remembered today for his actions during the Battle of Bunker Hill on June 17, 1775.

Poor was born into the Maafa (slavery), but succeeded in buying his freedom in 1769 at the age of approximately 19, for 27 pounds sterling (about one year’s salary); almost $5,600 in today’s dollars. He married a free Black woman named Nancy and together they had a son. In May of 1775 Poor enlisted in the Continental Army. He served in a Massachusetts Militia company commanded by Benjamin Ames. Some 5,000 other black men, both free and enslaved, served on the side of the “Patriot” Revolutionary Army, in addition to hundreds more in the Navy. Poor distinguished himself at the Battle of Bunker Hill (then known as the Battle of Charleston), on June 17, 1775. He fired the shot that killed Lieutenant Colonel James Abercrombie, a high-ranking British officer. The effect of his death was to cripple the morale of the enemy force, turning the tide of battle.

Furthering his record of distinction, Poor also fought at Valley Forge, White Plains, Saratoga, and Monmouth. In acknowledgment of his exceptional service to the cause of liberty, 14 officers, including Colonel William Prescott, petitioned the General Court of Massachusetts to honor his heroism, and bestow a monetary reward in recognition of his achievements. The petition stated in part:

“A [Black] called Salem Poor of Colonel Frye’s regiment, Captain Ames’ company, in the late battle at Charleston, behaved like an experienced officer, as well as an excellent soldier. It would be tedious to go into more detail regarding his heroic conduct. We only beg leave to say, in the person of this said [Black] centers a brave and gallant soldier.”

The Court failed to take any action on the petition. Poor was supposedly discharged sometime in 1780.

Details of Poor’s life after the Revolution — his troubled marriage, his death as a pauper — were unknown until research by genealogist David Lambert; an article about this research appeared in The Boston Globe in 2007. Lambert is descended from the Massachusetts family that enslaved Poor in Andover.

Lambert found that in 1780, Poor married his second wife, Mary Twing, a free African American. The couple moved to Providence; however, they were ordered to leave that city, presumably because they could not support themselves. In 1785, he placed an advertisement in the Boston Gazette to disown Mary’s debts and “forewarn all Persons from trusting MARY, the Wife of the Subscriber”. Poor then married Sarah Stevens, a whyte woman, in 1787, and in 1793 he spent several weeks in the Boston Almshouse. He was briefly jailed for “breach of peace” in 1799, married for the fourth and final time in 1801, and died in 1802.

Salem Poor was honored in 1975 with his image on a 10-cent postage stamp.