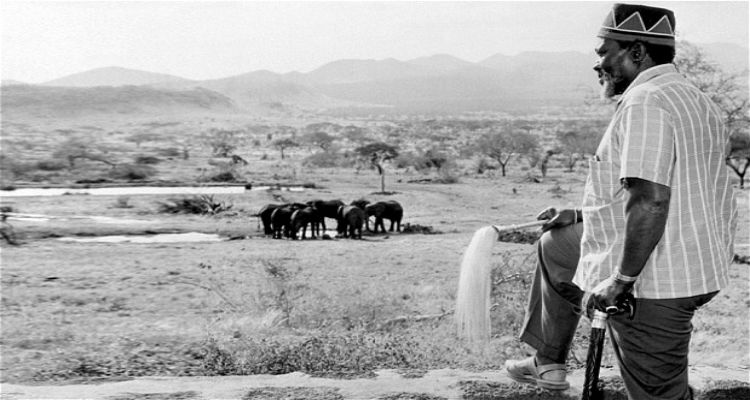 Jomo Kenyatta was the first President of Kenya. His date of birth, sometime in the early to mid-1890s, is unclear, and was unclear even to him, as his parents were illiterate, and no formal birth records of Africans were kept in Kenya at that time. However, most biographies give his date of birth as October 20, 1891. Kenya observed a public holiday every 20 October in Jomo Kenyatta’s honor until the 2010 constitution abolished Kenyatta Day and replaced it with Mashujaa (Heroes’) day.

“Our children may learn about the heroes of the past. Our task is to make ourselves the architects of the future.”

“To .. all the dispossessed youth of Africa: for the perpetuation of communion with ancestral spirits through the fight for African freedom, and in the firm faith that the dead, the living, and the unborn will unite to rebuild the destroyed shrines.” ~from the dedication in his book Facing Mount Kenya (1938).

“Many people may think that now there is Uhuru, now I can see the sun of Freedom shining, richness will pour down like manna from Heaven. I tell you there will be nothing from Heaven. We must all work hard, with our hands, to save ourselves from poverty, ignorance, and disease.” ~from an Independence Day message to the people, as quoted in Sanford Ungar’s Africa, the People and Politics of an Emerging Continent, New York, 1985.

“The basis of any independent government is a national language, and we can no longer continue aping our former colonizers … those who feel they cannot do without English can as well pack up and go.”

“God said this is our land, land in which we flourish as people… we want our cattle to get fat on our land so that our children grow up in prosperity; and we do not want the fat removed to feed others.” ~from a speech given in Nyeri, Kenya, 26 July 1952.

“Europeans assume that, given the right knowledge and ideas, personal relations can be left largely to take care of themselves, and this is perhaps the most fundamental difference in outlook between Africans and Europeans.”

“Don’t be fooled into turning to Communism looking for food.”

“It Africans were left in peace on their own lands, Europeans would have to offer them the benefits of white civilization in real earnest before they could obtain the African labor which they want so much. They would have to offer the African a way of life which was really superior to the one his fathers lived before, and a share in the prosperity given them by their command of science. They would have to let the African choose what parts of European culture could be beneficially transplanted, and how they could be adapted … The African is conditioned, by cultural and social institutions of centuries, to a freedom of which Europe has little conception, and it is not in his nature to accept serfdom forever.” ~from the conclusion to his book Facing Mount Kenya (1938)

“Where there has been racial hatred, it must be ended. Where there has been tribal animosity, it will be finished. Let us not dwell upon the bitterness of the past. I would rather look to the future, to the good new Kenya, not to the bad old days. If we can create this sense of national direction and identity, we shall have gone a long way to solving our economic problems.”