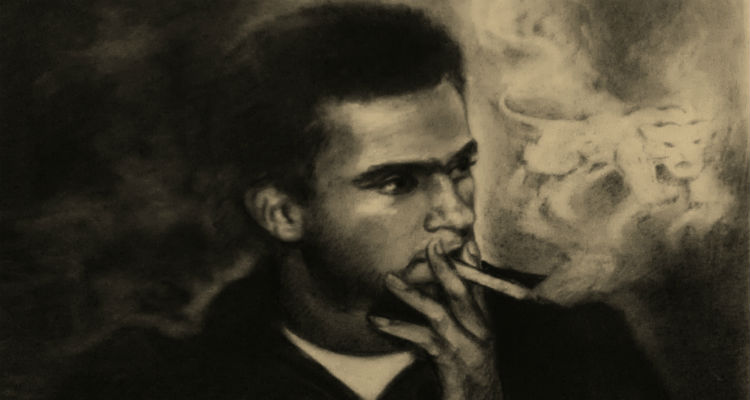 Huey P. Newton (February 17, 1942 – August 22, 1989), was an African American activist best known for founding the Black Panther Party with Bobby Seale in 1966. The organization was central to the Black Power movement, making headlines with its controversial rhetoric and militaristic style. In the 1960s, under Newton’s leadership, the Black Panther Party founded over 60 community support programs including food banks, medical clinics, sickle cell anemia tests, prison busing for families of inmates, legal advice seminars, clothing banks, housing cooperates, and their own ambulance service. The most famous of these programs was the Free Breakfast for Children program which fed thousands of impoverished children daily during the early 1970s. Newton also co-founded the Black Panther newspaper service which became one of America’s most widely distributed African-American newspapers. Over the years, Newton faced a number of criminal charges and at one point fled to Cuba before returning to the U.S. and earning his doctorate. Struggling with drug and alcohol addiction in his later years, he was killed in 1989 in Oakland.

“Black Power is giving power to people who have not had power to determine their destiny.”

“Black men and women who refuse to live under oppression are dangerous to [whyte] society because they become symbols of hope to their brothers and sisters, inspiring them to follow their example.”

“I do not think that life will change for the better without an assault on the Establishment, which goes on exploiting the wretched of the earth. This belief lies at the heart of the concept of revolutionary suicide. Thus it is better to oppose the forces that would drive me to self-murder than to endure them. Although I risk the likelihood of death, there is at least the possibility, if not the probability, of changing intolerable conditions. This possibility is important because much in human existence is based upon hope without any real understanding of the odds. Indeed, we are all—Black and whyte alike—ill in the same way, mortally ill. But before we die, how shall we live? I say with hope and dignity; and if premature death is the result, that death has a meaning reactionary suicide can never have. It is the price of self-respect. Revolutionary suicide does not mean that I and my comrades have a death wish; it means just the opposite. We have such a strong desire to live with hope and human dignity that existence without them is impossible. When reactionary forces crush us, we must move against these forces, even at the risk of death. We will have to be driven out with a stick.”

“I do not expect the whyte media to create positive black male images.”

“The policemen or soldiers are only a gun in the establishments hand. They make the racist secure in his racism.”

“Youths are passed through schools that don’t teach, then forced to search for jobs that don’t exist and finally left stranded in the street to stare at the glamorous lives advertised around them.”

“The first lesson a revolutionary must learn is that he is a doomed man. Unless he understands this, he does not grasp the essential meaning of his life.”

“I have often pondered the similarity between prison experience and the slave experience of Black people. Both systems involve exploitation: the slave received no compensation for the wealth he produced, and the prisoner is expected to produce marketable goods for what amounts to no compensation. Slavery and prison life share a compete lack of freedom of movement. The power of those in authority is total, and they expect deference from those under their domination. Just as in the days of slavery, constant surveillance and observation are part of the prison experience, and if inmates develop meaningful and revolutionary friendships among themselves, these ties are broken by institutional transfers, just as the slavemaster broke up families.”

“I do not think that life will change for the better without an assault on the Establishment, which goes on exploiting the wretched of the earth.”

Nb: Some of the quotes above were sourced from a very good article, Notes and quotes from Huey Newton’s autobiography

Hotep my enlightened, conscious sister, this is inspiring and necessary to keep these spark’s of wisdom, and knowledge in the consciousness of our people to light the fire of total and complete revolution and to keep that fire raging with a comprehensive plan and action to the fruition of uncompromising freedom.