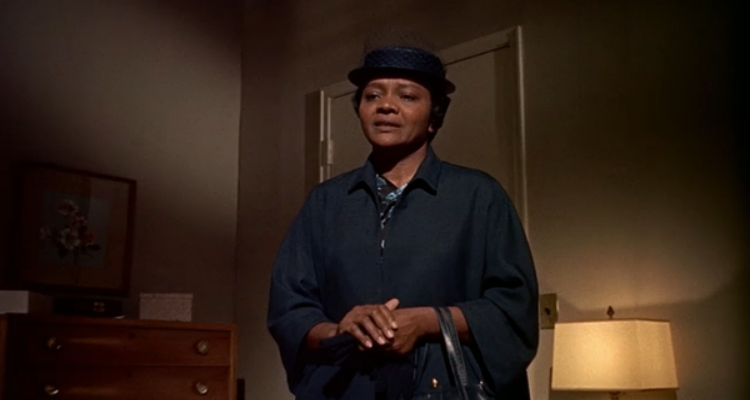 Juanita Moore was an Oscar-nominated African-American actress, best known for her starring role in the remake of Imitation of Life (1959). Moore was the fifth African American to be nominated for an Academy Award in any category, and the third in the Supporting Actress category at a time when only a single African American had won an Oscar.

Juanita Moore was born in Greenwood, Mississippi, the daughter of Ella and Harrison Moore. She had seven siblings, (six sisters and one brother). Her family moved in the Great Migration to Los Angeles, where she was raised.

Moore started her career in her teens, dancing at the Cotton Club in Harlem, New York. She then returned to LA, where she got jobs as a movie extra, and was seen as a chorus girl in the Sharp as a Tack number in Star Spangled Rhythm (1942), Paramount’s all-star variety show, and in the all-black-cast musical Cabin in the Sky (1943).

After making her film debut in Pinky (1949), Moore had a number of bit parts and supporting roles in motion pictures through the 1950s and 1960s. Her role in the remake of the racially themed film Imitation of Life (1959) as African-American housekeeper Annie Johnson, whose daughter Sarah Jane (Susan Kohner) passes for whyte, won her a nomination for an Academy Award for Best Supporting Actress. She was also nominated for the Golden Globe Award for Best Supporting Actress in a Motion Picture for the role.

Unfortunately, after her triumph in Imitation of Life, Moore’s film and television roles were only marginally bigger and better. “I think I made less money after that, to tell you the truth, because I thought I was going to make more money with better parts and things like that but found myself right back making minimum.” She was the sweet Sister Mary in The Singing Nun (1966) and a feisty mother in Up Tight (1968). On television, she appeared in several episodes of The Alfred Hitchcock Hour (1963-65), among other series.

Moore was a member of the Ebony Showcase theatre, Los Angeles, founded by Nick and Edna Stewart, which provided a venue for black performers to play the types of roles they were denied elsewhere. She gained more satisfaction from her stage role as the strong and devoted matriarch Mama Lena in Lorraine Hansberry’s A Raisin in the Sun, which ran at the Adelphi theatre in London in 1959. On Broadway, she played Sister Boxer in James Baldwin’s The Amen Corner (1965).

In the 70s, Moore became a fixture in black-oriented films, mostly in long-suffering maternal roles. In The Mack (1973), Moore played the mother of a pimp (Max Julien) whom she expects to lead a respectable life. The following year, she was in Thomasine and Bushrod, based on Bonnie and Clyde; and Abby, based on The Exorcist – and was also inducted into the Black Filmmakers Hall of Fame.

She continued to appear in films and television until 2001, her last movie role being the wise grandmother in the time-travel film The Kid (2000).

She collapsed and died at her home in Los Angeles on January 1, 2014, from natural causes. She was 99 years old. She is buried at Inglewood Park Cemetery.

Moore was married for 50 years to Charles Burris; he died in 2001. He was a Los Angeles bus driver and, although she was a frequent passenger, she had stepped out in front of his approaching bus to cross the street to a local bar, hoping to find someone to study for the Inès Serrano role in the play No Exit—Serrano was a lesbian (Moore was unfamiliar with lesbianism). She and Burris married a few weeks later.