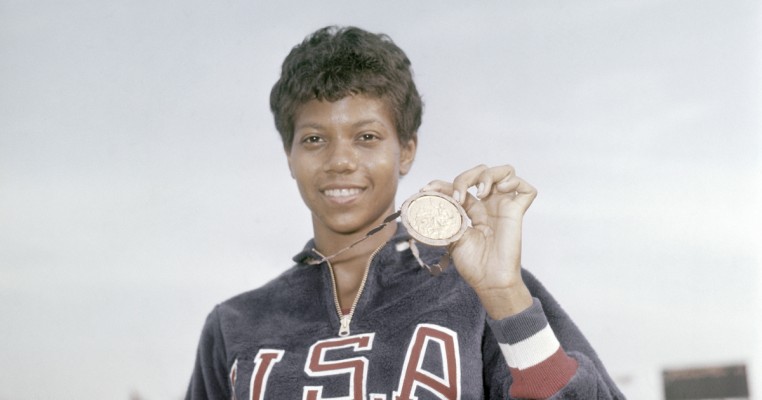 Wilma Rudolph was an African American athlete who made history in the 1960 Summer Olympic Games in Rome, Italy when she became the first American woman to win three gold medals in the track and field competition.

Rudolph was born on June 23, 1940, in St. Bethlehem, Tennessee, the 20th of 22 children. As a young child, she was paralyzed by polio and contracted both scarlet fever and double pneumonia. Many doctors felt she would never walk again, yet she always believed otherwise. By the time she was 12, she had regained her ability to walk and took up athletics. Eight years later she was an Olympic champion.

Rudolph made her Olympic debut at the 1956 Melbourne Games, aged just 16. She was a member of the American 4x100m relay team that claimed a bronze medal. The 1960 Rome Games provided the defining moments of Rudolph’s extraordinary life story. She stormed to gold in the 100m, 200m and 4x100m relay, breaking three world records in the process. She was dubbed “The Black Gazelle” by the European press for her speed, beauty, and grace. Her brilliant career ended with her retirement in 1962, after which she devoted herself to coaching and worked extensively with underprivileged children.

1. Never underestimate the power of dreams and the influence of the human spirit. We are all the same in this notion: The potential for greatness lives within each of us.

2. When the sun is shining I can do anything; no mountain is too high, no trouble too difficult to overcome.

4. ‘I can’t’ are two words that have never been in my vocabulary. I believe in me more than anything in this world.

5. Black women . . . work because their husbands can’t make enough money at their jobs to keep everything going. . . . They don’t go to work to find fulfillment or adventure, or glamour and romance, like so many European women think they are doing. Black women work out of necessity.

7. Winning is great, sure, but if you are really going to do something in life, the secret is learning how to lose. Nobody goes undefeated all the time. If you can pick up after a crushing defeat, and go on to win again, you are going to be a champion someday.

8. The potential for greatness lives within each of us.

9. It doesn’t matter what you’re trying to accomplish. It’s all a matter of discipline. I was determined to discover what life held for me beyond the inner-city streets.

10. The feeling of accomplishment welled up inside of me, three Olympic gold medals. I knew that was something nobody could ever take away from me, ever.