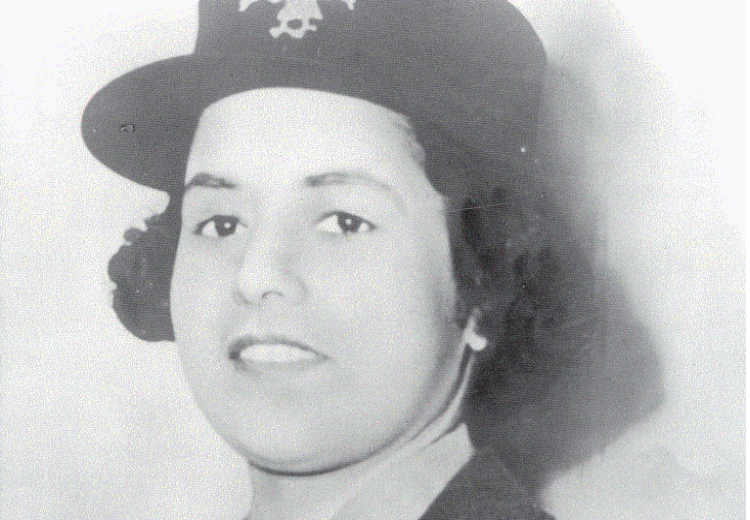 Anna Mac Clarke was the first African American woman to be a commanding officer of an otherwise all European regiment when the United States military was still segregated. Clarke joined the Women’s Army Corps of the US Army in 1942, but died two years later at the tender age of 24.

Anna Mac Clarke was born Anna Mack Mitchel on June 20, 1919, in Lawrenceburg, Kentucky. Her parents, Nora Mitchel and Tom Clark never married, and Anna Mack Mitchel would come be known as Anna Mac Clarke after dropping the “k” from Mack, and adding an “e” to the end of her father’s last name. Her mother had three more children, two boys, and one girl; Franklin, Lucien, and Evelyn. When her mother died of edema, the four children were raised by their grandmother, Lucy Medley.

Clarke received her high school diploma from Lawrenceburg High School and continued her education at Kentucky State College in Frankfort (now known as Kentucky State University). She graduated in June 1941 with a bachelor’s degree in sociology and economics. After struggling to find a job in Kentucky, she eventually found employment at a Girl Scouts camp in New York State. In the fall of that year, she moved to Cincinnati, Ohio, to work at the Nash House Community Center as the recreation director.

In October 1942, Anna Mac Clarke joined the war effort through the All-Volunteer Women’s Army Auxiliary Corps (WAAC). After completing her basic training, she enrolled in the WAAC Officer Candidate School (OCS) at Fort Des Moines. There were two other African Americans in her class, but Clarke would be the only one to finish the course eight weeks later on February 16, 1943. By the end of February, Clarke was reassigned to the Fourth Company, Third Regiment, as a Platoon Leader. Third Officer Anna Mac Clarke was the first African-American WAAC assigned to command what was otherwise an all-European unit.

In 1943, WAAC became the Women’s Army Corps (WAC) as a part of the regular Army. The WAC appointed Clarke as a first lieutenant. Over the next year, Clarke commanded several African-American units in various places across the country including Indiana and California.

Eventually, Clark moved to Douglas Army Air Field in southeastern Arizona. Located in eastern Arizona, this Army Air Field was one of only four in the U.S. to have both African-American soldiers and WACs. There, she commanded WAC Unit Section D, the first group of WACs on the base. The unit performed many duties previously held by men, including airplane maintenance. However, the theater on the post was segregated, and Clarke had been warned by the African-American soldiers not to go. Clarke and several other African-American WACs caused a stir on the base when they refused to sit in the corner of the theater designated for African-Americans. News of the incident reached the commanding officer of Douglas Army Air Field, Colonel Harvey Dyer, who released a statement in February 1944, stating that “…Every consideration, respect, courtesy, and toleration will be afforded every colored WAC. No discrimination will be condoned.”. This ended segregation and discriminatory practices at the base.

Unfortunately, Clarke’s career ended abruptly when she became sick in March 1944, when she was admitted to a hospital because of sharp pains in her side. Doctors diagnosed her with appendicitis and decided that she needed an appendectomy to save her life. At first, it was believed to be a successful surgery and Clarke was expected to make a full recovery. Unfortunately, gangrene had entered her body due to the infection brought on by the surgery. Anna Mac Clarke died on April 19, 1944, at the tender age of 24. Her body was sent back to Kentucky, where she was buried in Woodlawn’s Hill Cemetery.