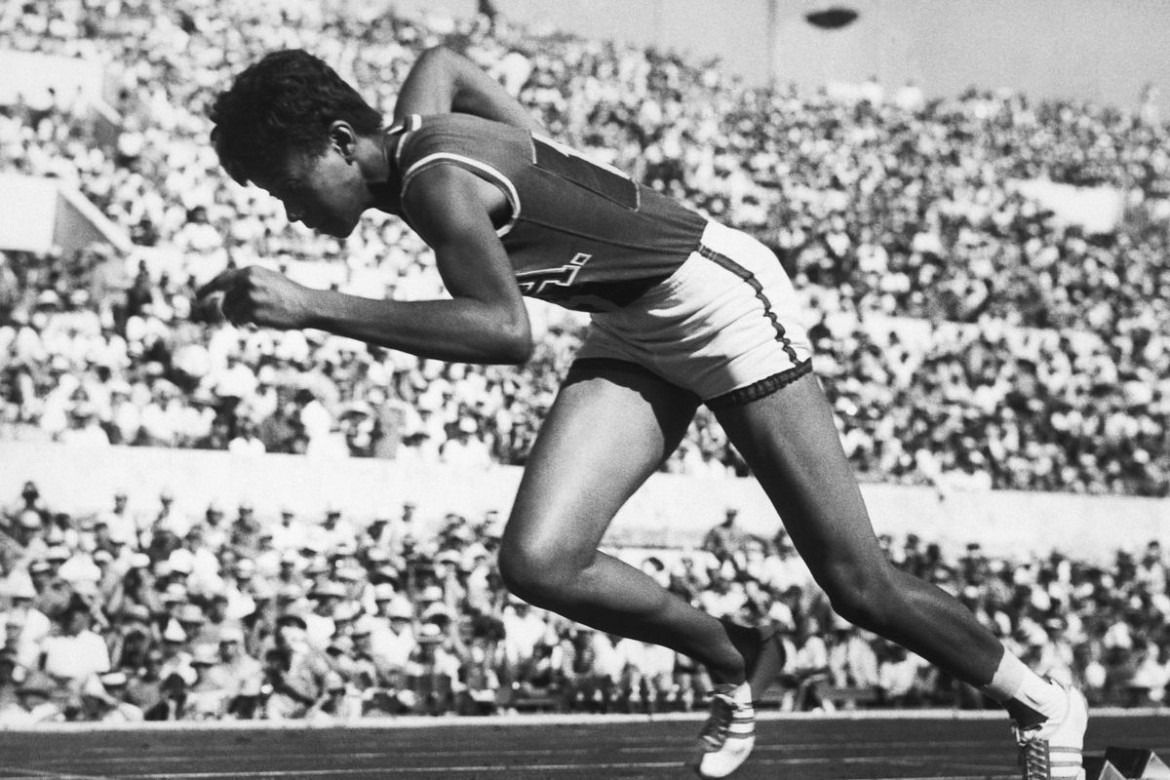 Wilma Glodean Rudolph was an African-American athlete who in 1960 became the first American woman to win three gold medals in track and field at a single Olympic Games. Rudolph became a world-record-holding Olympic champion and international sports icon following her successes in the 1956 and 1960 Olympic Games. She was acclaimed as the fastest woman in the world in the 1960s. As an Olympic champion, she was among the most highly visible Black women in America and abroad. She became a role model for Black and female athletes and her Olympic successes helped elevate women’s track and field in the United States.

Rudolph is also regarded as a civil rights and women’s rights pioneer. In 1962, she retired from competition at the peak of her athletic career as the world record-holder in the 100- and 200-meter individual events and the 4 × 100-meter relays, becoming an educator and coach. Rudolph died of brain and throat cancer in 1994. Her achievements are memorialized in a variety of tributes, including a U.S. postage stamp, documentary films, and a made-for-television movie, as well as in numerous publications, especially books for young readers.

Wilma Rudolph was born prematurely at 4.5 pounds on June 23, 1940, in Saint Bethlehem, Tennessee (now part of Clarksville, TN). She was the twentieth of 22 siblings from her father’s two marriages. Shortly after her birth, her family moved to Clarksville, Tennessee, where she grew up and attended elementary and high school.

Rudolph suffered from several early childhood illnesses, including pneumonia and scarlet fever, and she contracted infantile paralysis (caused by the poliovirus) at the age of five. She recovered from polio but lost strength in her left leg and foot. Physically disabled for much of her early life, Rudolph wore a leg brace until she was twelve years old. It was with great determination and the help of physical therapy that she was able to overcome her disabilities.

For two years, Rudolph and her mother made weekly bus trips to the historically Black Meharry Medical College (now Nashville General Hospital at Meharry) in about 50 miles (80km) from Clarksville, for treatments to regain the use of her weakened leg. She also received subsequent at-home massage treatments four times a day from members of her family and wore an orthopedic shoe for support of her foot for another two years. Because of the treatments she received at Meharry and the daily massages from her family members, Rudolph was able to overcome the debilitating effects of polio and learned to walk without a leg brace or orthopedic shoe for support by the time she was twelve years old.

Rudolph was initially homeschooled due to the frequent illnesses that caused her to miss kindergarten and first grade. She attended second grade at Cobb Elementary School in Clarksville in 1947, when she was seven years old, before attending Clarksville’s all-Black Burt High School, where she played on the basketball team. A naturally gifted runner, she was soon recruited to train with track coach Ed Temple for his summer training program at Tennessee State. After attending the track camp, Rudolph won all nine events she entered Amateur Athletic Union track meet in Philadelphia, Pennsylvania.

Nicknamed “Skeeter” by her high school coach for her famous speed, Rudolph competed in her first Olympics in Melbourne in 1956 at 16, the youngest member of the US squad, winning a bronze in the 4×100 metres relay.

After finishing high school, she enrolled at Tennessee State University, where she studied and trained for the 1960 Summer Olympics in Rome, Italy. Rudolph competed in three events: the 100- and 200-meter sprints, as well as the 4 × 100-meter relay. She won a gold medal in each of these events, becoming the first American woman to win three gold medals in a single Olympiad.

Rudolph instantly became one of the most popular athletes of the Rome Games as well as an international superstar for her groundbreaking achievements. She emerged from the Olympic Games as “The Tornado, the fastest woman on earth.” The Italians nicknamed her “La Gazzella Nera” (“The Black Gazelle”) and the French called her “La Perle Noire” (“The Black Pearl”). The Games launched Rudolph into the public spotlight and the media cast her as America’s athletic “leading lady” and a “queen,” with praises of her athletic accomplishments as well as her feminine beauty and poise.

Rudolph returned home to Clarksville after completing a post-games European tour, where she and her Olympic teammates competed in meets in London, West Germany, the Netherlands, and at other venues in Europe. Rudolph’s hometown of Clarksville celebrated “Welcome Wilma Day” on October 4, 1960, with a full day of festivities. Because Rudolph adamantly insisted, her homecoming parade and banquet became the first fully integrated municipal event in the city’s history, an estimated 1,100 attended the banquet in her honor and thousands lined the city streets to watch the parade.

Rudolph’s gold-medal victories in Rome also “propelled her to become one of the most highly visible Black women across the United States. She made numerous appearances on television and received several honors, including the Associated Press Female Athlete of the Year Award in both 1960 and 1961. The United States Information Agency made a ten-minute documentary film, Wilma Rudolph: Olympic Champion (1961), to highlight her accomplishments on the track.

She retired from competition not long after, at the age of twenty-two and went on to teach, coach and run a community center. At the time of her retirement, Rudolph was still the world record-holder in the 100-meter (11.2 seconds set on July 19, 1961), 200-meter (22.9 seconds set on July 9, 1960), and 4 x 100-meter-relay events. She had also won seven national AAU sprint titles and set the women’s indoor track record of 6.9 seconds in the 60-yard dash. As Rudolph explained it, she retired at the peak of her athletic career because she wanted to leave the sport while still at her best. As such, she did not compete at the 1964 Summer Olympic Games in Tokyo, Japan, saying, “If I won two gold medals, there would be something lacking. I’ll stick with the glory I’ve already won like Jesse Owens did in 1936.”

After retiring from competition, Rudolph continued her education at Tennessee State and earned a bachelor’s degree in elementary education in 1963. That year she also made a month-long trip to West Africa as a goodwill ambassador for the U.S State Department. Rudolph served as U.S. representative to the 1963 Friendship Games in Dakar, Senegal, and visited Ghana, Guinea, Mali and Upper Volta, where she attended sporting events, visited schools, and made guest appearances on television and radio broadcasts. She also attended the premiere of the U.S. Information Agency’s documentary film that highlighted her track career.

In May 1963, a few weeks after returning from Africa, Rudolph participated in a civil rights protest in her hometown of Clarksville to desegregate one of the city’s restaurants. Within a short time, the mayor announced that the city’s public facilities, including its restaurants, would become fully integrated.

Rudolph did not earn significant money as an amateur athlete and shifted to a career in teaching and coaching after her retirement from track competition. She began as a second-grade teacher at Cobb Elementary School, where she had attended as a child, and coached track at Burt High School, where she had once been a student-athlete herself, but conflict forced her to leave the position. She moved several times over the years and lived in various places such as Chicago, Indianapolis, Indiana, Saint Louis, Missouri, Detroit, Michigan, Tennessee, California, and Maine.

Rudolph’s autobiography, Wilma: The Story of Wilma Rudolph, was published in 1977. It served as the basis for several other publications and films. By 2014 at least twenty-one books on Rudolph’s life had been published for children from pre-school youth to high school students.

In addition to teaching Rudolph worked for nonprofit organizations and government-sponsored projects that supported athletic development among American children. In Boston, Massachusetts, she became involved in the federal Job Corps program, and in 1967 served as a track specialist for Operation Champion. In 1981 Rudolph established and led the Wilma Rudolph Foundation, a nonprofit organization based in Indianapolis, Indiana, that trains youth athletes. In 1987 Rudolph joined DePauw University Greencastle, Indiana, as director of its women’s track program and served as a consultant on African-American affairs to the university’s president.

She went on to host a local television show in Indianapolis. Rudolph was also a publicist for Universal Studios as well as a television sports commentator for ABC Sports during the 1984 Summer Olympics in Los Angeles, California, and lit the cauldron to open the Pan American Games in Indianapolis in 1987 in front of 80,000 spectators at the Indianapolis Motor Speedway. In 1992, two years before her untimely death, Rudolph became a vice president at Nashville’s Baptist Hospital.

Rudolph was married twice. On October 14, 1961, she married William “Willie” Ward, but the couple divorced in May 1963. After her graduation from Tennessee State in 1963, she married Robert Eldridge, her high school sweetheart, with whom she already had a daughter, Yolanda, born in 1958. Rudolph and Eldridge had four children: two daughters (Yolanda, born in 1958, and Djuanna, born in 1964) and two sons (Robert Jr., born in 1965, and Xurry, born in 1971). Their seventeen-year marriage ended in divorce.

In July 1994 (shortly after her mother’s death), Rudolph was diagnosed with brain cancer. She also had been diagnosed with throat cancer. Her condition deteriorated rapidly, and she died on November 12, 1994, at the age of fifty-four, at her home in Brentwood, a suburb of Nashville, Tennessee.

She was survived by her four children, eight grandchildren, and many siblings, nieces and nephews Thousands of mourners filled Tennessee State University’s Kean Hall on November 17, 1994, for the memorial service in her honor. Across Tennessee, the state flag flew at half-mast.

Rudolph’s legacy lies in her efforts to overcome obstacles that included childhood illnesses and a physical disability to become the fastest woman runner in the world in 1960. At the 1960 Rome Olympics, she became the first American woman to win three gold medals in a single Olympiad. Rudolph was one of the first role models for black and female athletes. Her Olympic success “gave a tremendous boost to women’s track in the United States.” Rudolph’s celebrity also caused gender barriers to be broken at previously all-male track and field events such as the Millrose Games.

In addition to her athletic accomplishments, Rudolph is remembered for her contributions to youth, including founding and heading the Wilma Rudolph Foundation, which trains youth athletes. Rudolph has been memorialized with a variety of tributes, including her image on a commemorative U.S. postage stamp. Wilma: The Story of Wilma Rudolph (1977), her autobiography, was adapted into a television docudrama. Her life is also remembered in Unlimited(2015), a short documentary film for school audiences, as well as in numerous publications, especially books for young readers. She once stated, “Winning is great, sure, but if you are really going to do something in life, the secret is learning how to lose. Nobody goes undefeated all the time. If you can pick up after a crushing defeat, and go on to win again, you are going to be a champion someday.”