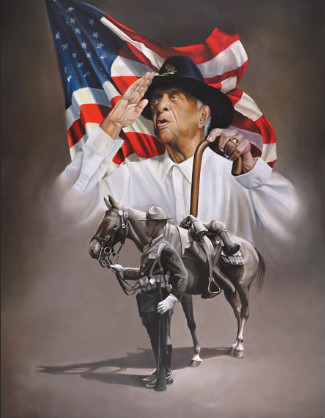 Matthews was born in Greenville, Alabama, and grew up in Mansfield, Ohio. He rode horses starting when he was a child, delivering newspapers on his pony. According to stories Matthews told friends, family members and at least one military historian, he was 15 when he met members of the Buffalo Soldiers’ 10th Cavalry; they were visiting a Lexington, Ky., racetrack where he worked exercising the horses.

The name Buffalo Soldiers was given to the troops of the all-black 9th and 10th Cavalry regiments by their adversaries in the Indian wars of the late 1800s. The name is believed to have originated either because the Indians thought the soldiers’ hair resembled a buffalo’s mane or that the Indians respected the soldiers for their courage and fearlessness, qualities they found in the buffalo. The soldiers wore the nickname with pride. And they earned their reputation. More than 20 Buffalo Soldiers went on to receive the Medal of Honor, the military’s highest award for valor. No other unit has won more.

Although young men had to be 17 to enlist, Matthews joined the legendary unit at the age of 16. His boss concocted documents that convinced a Columbus, Ohio, recruiter that he was of age.

“I was 16 when I joined the Army to be a soldier,” he told Parade Magazine in 2003. “I had to wait awhile before I could get on duty. But then they shipped me to the West.”

Matthews was first stationed in Fort Huachuca in Arizona. At the time, the army was still using Native Americans as guides in the western United States. “I learned all the different rules, how to ride the different horses, how to jump and how to shoot,” he recalled in the 2003 interview. “Every time I got in a contest where I shot at a target or something, I usually won.”

In 1916, Matthews – who was regarded as an excellent marksman – served under Gen. John Joseph “Black Jack” Pershing in the Army’s pursuit of Pancho Villa, the revolutionary from Mexico who was considered a bandit. Although Matthews admitted to never having met Villa, he would claim that “I knew where he was at.” When the United States turned its attention to World War I, Europe had no use for American cavalry, therefore Matthews and the 10th Regiment remained in the United States for the duration of the conflict.

In 1931, he was assigned to Fort Myer, in Virginia, where he trained new recruits in horsemanship. While stationed there, Matthews and some of his troops were escorts for King George VI and his wife Queen Elizabeth when they came to visit President Franklin D. Roosevelt at the White House. He earned acclaim for his horse shows, which helped sell war bonds during World War II and he tended to First Lady Eleanor Roosevelt’s personal horses. He also played on the polo team while stationed in the state. 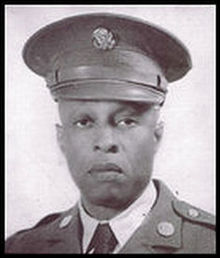 Matthews was also a member of the Buffalo Soldiers’ drum and bugle corps, and performed at funerals in Arlington National Cemetery, where he himself would later be buried. Since the Army would not allow Black soldiers to be seen at whyte funerals at this time, he was forced to hide in the woods while playing “Taps”. A decade later, he fought in World War II and saw combat action at the Battle of Saipan in the South Pacific. During the conflict, he rose to the rank of First Sergeant. He had originally been sent to train with the Tuskegee Airmen, but was deemed to be too old at the time.

Although there were conflicting reports on whether he retired from the Army in 1947, 1949 or 1950, he left the army only shortly before the Buffalo Soldiers were disbanded as part of President Harry S. Truman’s initiative to integrate the Army. His next job was at the National Institutes of Health in Bethesda where he worked as a security guard. By the time he retired for a second time, in 1970, he had become the chief of the guards at the institution. He spent much of his spare time fishing, reading the Bible, and recounting tales of his extensive military experiences, which made him a popular and respected figure within the community. His wife of 57 years, Genevieve Hill Matthews, died in 1986 and one of his daughters, Shirley Ann, died two years later. 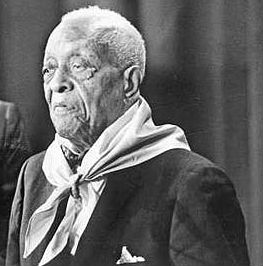 In his old age, Matthews became a symbol for the Buffalo Soldiers. In 1994, he met with President Bill Clinton at the White House. In 1997, at the age of 103, Matthews was present at Arlington National Cemetery for a service honoring the Buffalo Soldiers, where he unveiled a plaque that dedicated his former barracks in honor of the soldiers. For his 108th birthday in 2002, he met with then-United States Secretary of State Colin Powell, where Powell was presented with a portrait of Matthews. He was a member of his local church, a Prince Hall Masonic Temple and the Washington chapter of the 9th and 10th Cavalry Association until his death.

Although partially blind from glaucoma by the age of 109 and completely blind from cataracts by 111, he nevertheless retained his memory and good health until his final days; his medical history showed no signs of high blood pressure, heart or kidney trouble or diabetes. He was able to walk without a cane or walker, preferring not to use one, and was able to feed himself, including Cheerios for breakfast, his favorite vanilla ice cream with his other meals and a daily can of Ensure for energy. While he enjoyed recounting tales from his military experience, he never complained about the segregated nature of his unit, preferring instead to focus on his own exploits on the job.

“I did it all,” Matthews said, describing his military service in a brief interview. “Yes, I was there.”

Matthews died at the age of 111 of pneumonia in Washington, D.C. At the time of his death, he was recognized as the oldest living former Buffalo Soldier, the oldest man in Washington and the second oldest person in Washington overall behind then oldest American Corinne Dixon Taylor. He was survived by three of his four daughters, his son, nine grandchildren and seventeen great-grandchildren. He was buried at Arlington National Cemetery in September 2005 and Washington, D.C. Mayor Anthony A. Williams spoke at his funeral, which was also attended by councilman and future mayor Adrian Fenty.