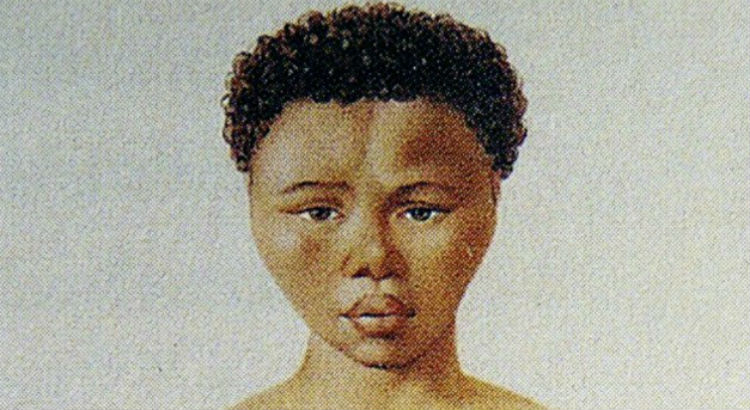 “We cannot undo the damage that was done to her. But at least we can summon the courage to speak the naked but healing truth that must comfort her wherever she may be.” –Thabo Mbeki

Sarah Baartman, the “first known Black female victim of trafficking,” died on 29 December 1815. A Khoi-san woman of South Africa, she was lured to Europe with the promise of fame and riches. Baartman was brought to England in 1810, and exhibited on stage in a cage as a curiosity known as the Hottentot Venus. A court battle waged by British abolitionists to free her from her exhibitors failed. In 1814 she was taken to France, and became the object of scientific and medical research that formed the bedrock of European sick ideas about Black female sexuality. After her death, her brain, skeleton and sexual organs remained on display in a Paris museum until 1974 and were not repatriated and buried until 2002. Today she is seen by many as the epitome of colonial exploitation and racism, of the ridicule and commodification of Black people; and the ‘quintessential’ figure of intersecting gender and racial oppressions. 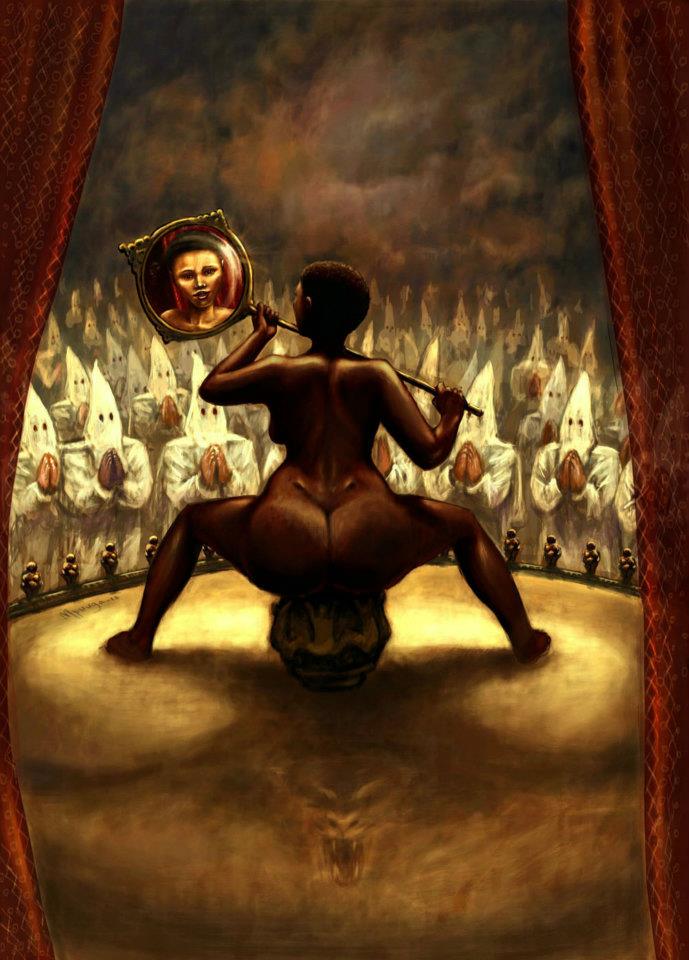 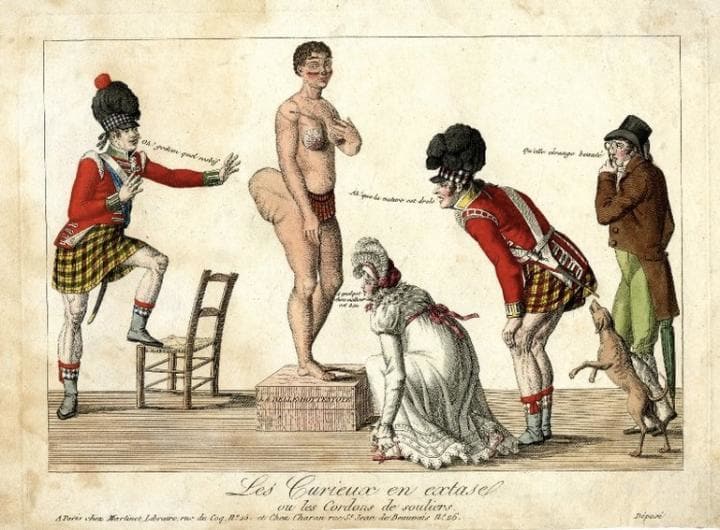 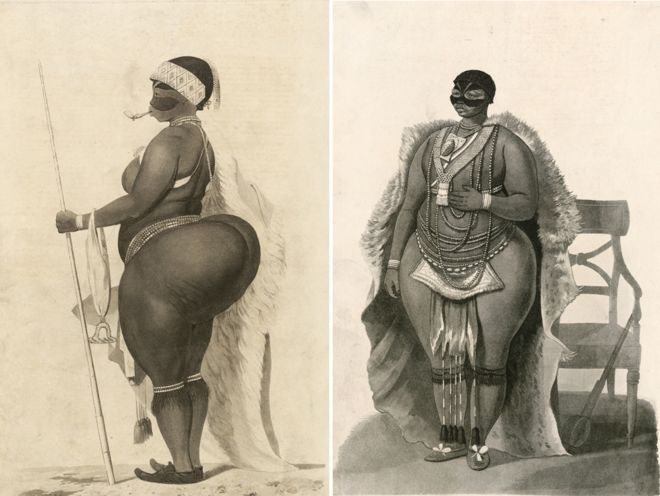 It is believed that Sarah Baartman, also known as Sara or Saartjie, was born in South Africa’s Eastern Cape in 1789. She belonged to the cattle-herding Gonaquasub group of the Khoikhoi. Her mother died when she was aged two and her father, who was a cattle driver, died when she reached adolescence. Baartman married a Khoikhoi man who was a drummer and they had one child together who died shortly after birth. When she was sixteen years old, her partner was murdered by Dutch colonists. Soon after, she was sold into slavery to a trader named Pieter Willem Cezar, who took her to Cape Town where she became a domestic servant to his brother. It was during this time that she was given the name ‘Saartjie’, a Dutch diminutive for Sara.

On 29 October 1810, Baartman allegedly ‘signed’ a contract with an English ship surgeon named William Dunlop who was also a friend of Cezar and his brother Hendrik. Apparently, the terms of her contract were that she would travel with Hendrik Cezar and Dunlop to England and Ireland to work as a domestic servant, and be exhibited for entertainment purposes. She was to receive a ‘portion of earnings’ from her exhibitions and be allowed to return to South Africa after five years. Two reasons make her signing appear dubious. The first is that she was illiterate. Secondly, the Cezar families had financial problems. It is suspected that they used Baartman to earn money, because human zoos were popular in Europe. Baartman had a genetic condition common among Khoisan women known as steatopygia, which resulted in a build-up of fat in her buttocks, and in the early 1800s, England had a fascination with large behinds. According to Rachel Holmes, author of The Hottentot Venus: The Life and Death of Saartjie Baartman, “…It was highly fashionable and desirable for women to have large bottoms, so lots of people envied what she had naturally, without having to accentuate her figure,” 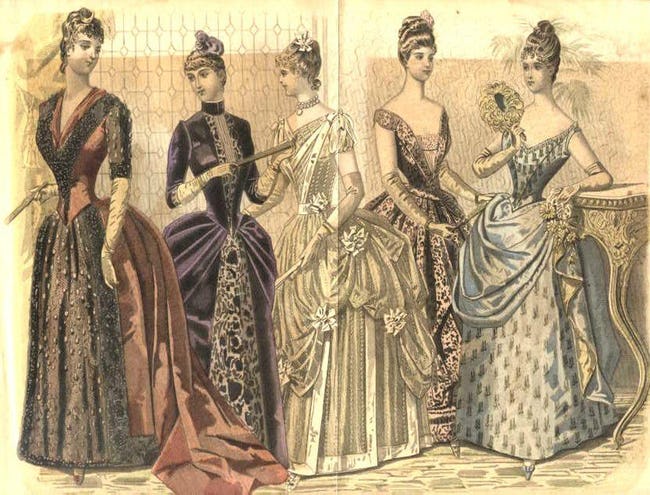 Baartman was exhibited at a venue in London after her arrival. For 2 shillings, from 1pm to 5pm, at 225 Piccadilly, people could witness Baartman displayed as animal-like and exotic. On stage she wore skin-tight, flesh-coloured clothing, as well as beads and feathers, and smoked a pipe. She was forced to show off her derrière in a cage that was about a metre and half high. Wealthy customers could pay for private demonstrations in their homes, with their guests allowed to touch her.

Baartman’s promoters nicknamed her the “Hottentot Venus”. Hottentot was a derogatory term used by the Dutch to describe the Khoikhoi and San, who together make up the peoples known as the Khoisan.

Baartman became a success, as visitors flocked to Piccadilly to see a live Khoikhoi woman, renowned for her enlarged buttocks, paraded around a stage like a circus animal. As Rachel Holmes, observes: “Almost overnight, London was taken with Saartjie-mania. She instantly captured the public imagination. There was an outpouring of “Sartjee”-themedpopular poesy, ballads, broadsheet caricatures, articles, and printed satires. Her image proliferated, seemingly everywhere reproduced, on brightly colored posters pasted in shop windows, on penny prints held aloft by street sellers, the human tabloids who raised the cry of “Sartjee” and “Hottentot” throughout the metropolis.”

However, during her time with Dunlop and Hendrik Cezar, the campaign against Atlantic slavery in Britain was ongoing. The British Empire had abolished the slave trade in 1807, but not slavery itself. A young Jamaican, Robert Wedderburn, who founded the African Association to campaign against racism, pressured the government to end the daily spectacle on the grounds that it amounted to slavery. As a result, campaigners took her employers to court for holding Baartman against her will. However, Cezar produced a document that had allegedly been signed by Baartman; and she testified that she was not being mistreated. The courts ruled that Baartman had entered into a contract of her own free will and the show went on. It is doubtful the Hottentot Venus ever saw a contract. However, her ‘contract’ was amended and she became entitled to better conditions, greater profit share and warm clothes. After the case, Baartman’s show gradually lost its novelty and popularity among audiences in the capital and she went on tour around Britain and Ireland.

In 1814 she moved to Paris with Cezar; and eighteen months later, she was dead.

“Who Is Sara Baartman? Every black woman should know her name” by Dede Hunt

Cezar returned to South Africa and Baartman came under the influence of an “animal exhibitor”, with the stage name Reaux. He exhibited her around Paris and reaped financial benefits from the public’s fascination with her body. He began exhibiting her in a cage alongside a baby rhinoceros. Her “trainer” would order her to sit or stand in a similar way that circus animals are ordered. At times Baartman was displayed almost completely naked, wearing little more than a tan loincloth, and she was only allowed that due to her insistence that she cover what was culturally sacred. It is believed that she drank and smoked heavily to cope with her humiliating ordeal.

The naturalist Georges Cuvier, who had danced with Baartman at one of Reaux’s parties, asked Reaux if he would allow Baartman to be studied as a science specimen. From March 1815 Sara was studied by French anatomists, zoologists and physiologists. She refused to appear fully naked before them, arguing that this was beneath her dignity – she had never done this in one of her shows.

Baartman died in 1816 at the age of 26. The cause was described as “inflammatory and eruptive disease”. It’s since been suggested this was a result of pneumonia, syphilis or alcoholism. After her death, her body became the object of ‘scientific’ and ‘medical’ research to promote grotesque racial stereotypes

Cuvier obtained her remains from the local police, and made a plaster cast of her body, before minutely dissecting it. He preserved her skeleton and in the name of Science, pickled her brain and genitals and placed them into jars which were put on display at the Musée de l’Homme (Museum of Man) until 1974. Cuvier would later state: “Her moves had something that reminded one of the monkey and her external genitalia recalled those of the orang-utan.”

The story of Sara Baartman resurfaced in 1981 when Stephen Jay Gould, a palaeontologist wrote about her story in his book The Mismeasure of Man where he criticised racial science.

After his election in 1994 as President of South Africa, Nelson Mandela requested the repatriation of Baartman’s remains and Cuvier’s plaster cast. The process took eight years, as the French had draft a carefully worded bill that would not allow other countries to claim treasures taken by the French.

As the French Parliament debated the matter of the return of her remains to her native land, the then Minister of Research, Roger-Gerard Scwartzenberg said: “This young woman was treated as if she was something monstrous. But where in this affair is the monstrosity?”

According to Thabo Mbeki, “the monstrosity lie in the matter of the gross abuse of a defenceless African woman in England and France! It was not the abused human being who was monstrous but those who abused her. It was not the lonely African woman in Europe, alienated from her identity and her motherland who was the barbarian, but those who treated her with barbaric brutality.”

In 1998, Diana Ferrus, a South African writer, poet and storyteller of Khoisan ancestry, wrote a poem about Sarah Baartman. The popularity of the poem is widely believed to be responsible for the return of Bartmann’s remains to South Africa, for in March 2002, the French government eventually agreed for Baartman’s remains to return to South Africa in 2002. The poem was published into a French law.

“I’ve come to take you home –
home, remember the veld?
the lush green grass beneath the big oak trees
the air is cool there and the sun does not burn.
I have made your bed at the foot of the hill,
your blankets are covered in buchu and mint,
the proteas stand in yellow and white
and the water in the stream chuckle sing-songs
as it hobbles along over little stones…”

from “A poem for Sarah Baartman“ by Diana Ferrus

On Women’s Day, 9 August 2002, Sara Baartman’s remains were buried in the area of her birth, the Gamtoos River Valley in the Eastern Cape, 192 years after she had left for Europe.

Several articles and books have been published about Saartjie Baartman’s treatment and cultural significance. Baartman’s story is seen as a particularly shocking example of the ways in which Black bodies can be dehumanised, and made into a grotesque “other”. “She has become the landscape upon which multiple narratives of exploitation and suffering within black womanhood have been enacted,” wrote Natasha Gordon-Chipembere, editor of Representation and Black Womanhood: The legacy of Sarah Baartman. She argued that, amid all this, Baartman “the woman, remains invisible”.