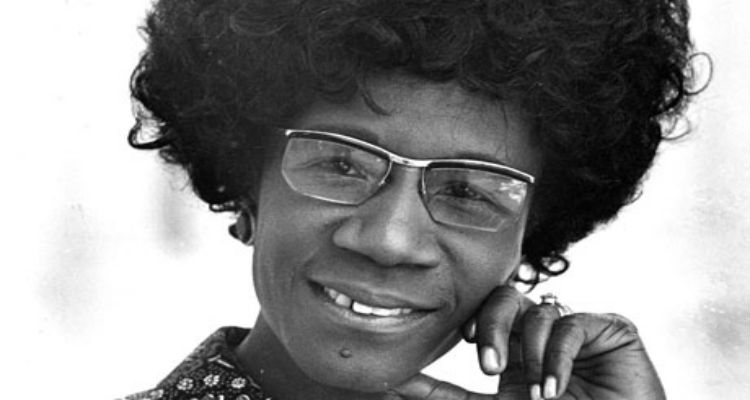 Shirley Chisholm was a pioneering African-American politician, who became the first Black woman to serve in the United States Congress. Chisholm was also the first African American woman to run for president, in 1972. She ran for Presidency with the slogan, “Unbought and Unbossed.” Chisholm, who died in 2005, received a posthumous Presidential Medal of Freedom, in November 2015.

“When I was reared in the British West Indies my grandmother used to always tell me, you may not be loved by certain forces in a society and you have to understand why. But always speak the truth.”

Chisholm would later credit much of her educational successes to this well-rounded early education.

When Chisholm was ten years old, she returned to New York during the height of the Great Depression (1929–39). She attended New York public schools and won tuition scholarships to several distinguished colleges but was unable to afford the room and board. At the urging of her parents she decided to live at home and attend Brooklyn College.

While training to be a teacher, Chisholm became active in several campus and community groups. She developed an interest in politics and learned the arts of organizing and fund-raising. Soon, she developed a deep resentment toward the role of women in local politics, which, at the time, consisted mostly of staying in the background and playing a secondary role to their male equals. Through campus politics and her work with the National Association for the Advancement of Colored People (NAACP), Chisholm found a way to voice her opinions about economic and social structures in a rapidly changing nation.

After graduating with honors from Brooklyn College in 1946, Chisholm began work as a nursery school teacher and later as a director of schools for early childhood education. As a teacher, Chisholm became involved in several organizations including the League of Women Voters and the Seventeenth Assembly District Democratic Club. She also became politically active with the Democratic Party and quickly developed a reputation as a person who challenged the traditional roles of women, African Americans, and the poor.

After a successful career as a teacher, Chisholm decided to run for the New York State Assembly. In 1964 Chisholm was elected to the assembly. During the time that she served in the assembly Chisholm sponsored fifty bills, but only eight of them passed. One of the successful bills she supported provided assistance for poor students to go on to higher education. Another provided employment insurance coverage for personal and domestic employees. Still another bill reversed a law that caused female teachers in New York to lose their tenure (permanence of position) while they were out on maternity leave.

Chisholm served in the state assembly until 1968, when she decided to run for the U.S. Congress. In 1969, Chisholm became the first black congresswoman and began the first of seven terms. After initially being assigned to the House Forestry Committee, she shocked many by demanding reassignment. She was placed on the Veterans’ Affairs Committee, eventually graduating to the Education and Labor Committee. She became one of the founding members of the Congressional Black Caucus in 1969 (a group of lawmakers who represent African Americans).

During the Vietnam War (1955–75), Chisholm protested the amount of money being spent for the defense budget while social programs suffered. Chisholm argued that money should not be spent for war while many Americans were hungry, poorly educated, and without adequate housing.

Chisholm was also a strong supporter of women’s rights. Early in her career as a congresswoman, she took a stand on the issue of abortion (a woman’s right to prevent the birth of a child) and supported a woman’s right to choose. She also spoke against traditional roles for women professionals (including secretaries, teachers, and librarians), arguing that women were capable of entering many other professions. Black women especially, she felt, had been pushed into stereotypical roles, or conventional professions, such as maids and nannies. Chisholm supported the idea that they needed to escape, not just by governmental aid, but also by self-effort. Her antiwar and women’s liberation views made Chisholm a popular speaker on college campuses.

In 1972 Chisholm ran for the highest office in the land—President of the United States of America. In addition to her interest in civil rights, she spoke out about the judicial system in the United States, police brutality, prison reform, gun control, drug abuse, and numerous other topics. Chisholm did not win the Democratic nomination, but she did win an impressive 10 percent of the votes within the party. As a result of her candidacy, Chisholm was voted one of the ten most admired women in the world.

After her unsuccessful presidential campaign, Chisholm continued to serve in the U.S. House of Representatives for another decade. As a member of the Black Caucus she was able to watch Black representation in the Congress grow and to welcome other Black female congresswomen. In 1982, she announced her retirement from Congress.

From 1983 to 1987 Chisholm served as Purington Professor at Mt. Holyoke College in Massachusetts, where she taught politics and women’s studies. In 1985 she was the visiting scholar at Spelman College, and in 1987 she retired from teaching altogether. Chisholm continued to be involved in politics by cofounding the National Political Congress of Black Women in 1984. She also worked for the presidential campaigns of Jesse Jackson (1941–) in 1984 and 1988. In 1993 President Bill Clinton nominated Chisholm for the position of Ambassador to Jamaica. Because of declining health, she turned down the nomination.

Chisholm died on January 1, 2005, in Ormond Beach near Daytona Beach, after suffering several strokes. She was buried in Forest Lawn Cemetery in Buffalo, New York.