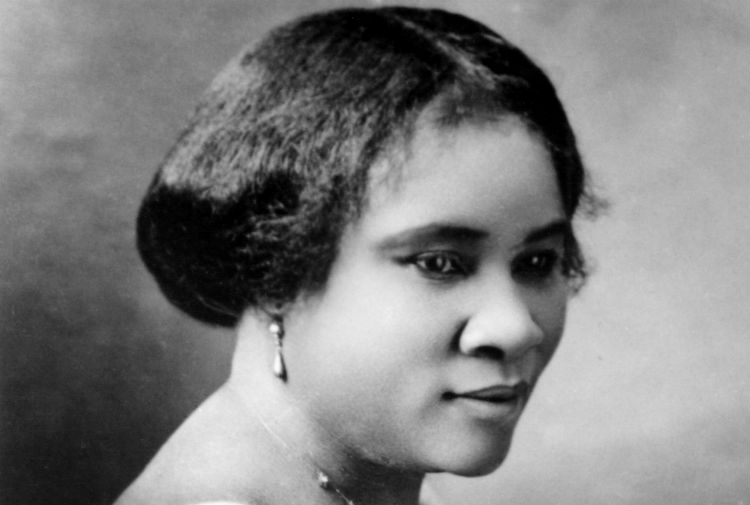 [dropcap size=small]M[/dropcap]adam C. J. Walker was an African American entrepreneur, philanthropist, and political and social activist. Walker was one of the first American women to become a self-made millionaire. Walker used her wealth from her business success in creating specialized hair products for African-Americans, to fund scholarships for women at the Tuskegee Institute and financially support the NAACP, the Black YMCA and dozens of other charities.

Walker was born Sarah Breedlove on December 23, 1867, near Delta, Louisiana, to Owen and Minerva (Anderson) Breedlove. She was one of six children; and the first child in her family born into freedom after the Emancipation Proclamation was signed. Her mother died in 1874 and her father passed away the following year, both due to unknown causes. Orphaned at the age of seven, she was sent to live with her sister, Louvinia, and her brother-in-law. The three moved to Vicksburg, Mississippi, in 1877.

In 1882, at the age of fourteen, to escape her abusive brother-in-law’s household, Walker married at 14, and together she and Moses McWilliams had one daughter, Lelia (later “A’Lelia Walker”), born on June 6, 1885. A year after Moses died in 1887, Walker and her daughter moved to Saint Louis, Missouri, where three of her brothers lived. Walker found work as a laundress, earning $1.50 a day—enough to send her daughter to the city’s public schools. She also attended public night school whenever she could. Walker remarried in 1894, but left her second husband, John Davis, around 1903.

During the 1890s, Walker developed a scalp disorder that caused her to lose much of her hair, and she began to experiment with both home remedies and store-bought hair care treatments in an attempt to improve her condition. She also learned about hair care from her brothers, who were barbers in Saint Louis. Around the time of the Louisiana Purchase Exposition (World’s Fair at St. Louis in 1904), she became a commission agent selling products for Annie Turnbo Malone, an African American hair-care entrepreneur and owner of the Poro Company. While working for Malone, who would later become Walker’s largest rival in the hair-care industry, Walker began to adapt her knowledge of hair and hair products to develop her own product line.

In July 1905, when she was thirty-seven years old, Walker and her daughter moved to Denver, Colorado. Soon thereafter, she broke ties with Malone and develop her own hair-care business. The method of beauty culture she developed revolutionized Black hair care. The combination of scalp preparation, application of lotions, and use of iron combs became known as the “Walker system.”

Contrary to legend, Madam Walker didn’t invent the hot comb. According to A’Lelia Bundles’ biography of Walker in Black Women in America, a Frenchman, Marcel Grateau, popularized it in Europe in the 1870s, and even Sears and Bloomingdale’s advertised the hair-straightening styling tool in their catalogs in the 1880s. But Walker did improve the hot comb with wider teeth, and as a result of its popularity, sales sizzled.

Walker distinguished her products from the hair straighteners advocated by European cosmetic firms, arguing that her treatment was geared to the special health needs of Blacks. She sold her homemade products directly to Black women, using a personal approach that won her customers and eventually a fleet of loyal saleswomen. Following her marriage to Charles Walker in 1906, she became known as Madam C. J. Walker. Her husband, who was also her business partner, provided advice on advertising and promotion.

To promote her products, the new “Madam C.J. Walker” traveled for a year and a half on a dizzying crusade throughout the heavily Black South and Southeast, selling her products door to door, demonstrating her scalp treatments in churches and lodges, and devising sales and marketing strategies. In 1908, she temporarily moved her base to Pittsburgh where she opened Lelia College to train Walker “hair culturists.” Within two years she was earning the equivalent of $150,000 a year in today’s dollars.

In 1910 Walker moved her operations to Indianapolis, working tirelessly to grow her company and reaching out to new markets. That same year, she incorporated the Madam C.J. Walker Manufacturing Company of Indiana, and owned all $10,000 worth of stock. In Indianapolis, the company not only manufactured cosmetics, but trained sales beauticians. These “Walker Agents” became well known throughout the African American communities of the United States. In turn, they promoted Walker’s philosophy of “cleanliness and loveliness” as a means of advancing the status of African-Americans. Her business employed over three thousand workers, mainly door-to-door saleswomen.

It was around this time that Walker began her lifelong philanthropy, pledging $1,000 to a local YMCA. The Indianapolis Freeman proclaimed her the “first colored woman in United States history to give $1,000 to a colored YMCA building.”

By 1913, Walker’s business was earning $3,000 a month (over $50,000 in today’s dollars). She put some of that money toward scholarships at Washington’s Tuskegee Institute, where she had recently visited and been impressed by the students’ work. A major part of Walker’s business plan was her assisting others. At a 1914 NNBL convention, Madam Walker stated, “I am not merely satisfied in making money for myself, for I am endeavoring to provide employment for hundreds of the women of my race.” While here, Walker — ever the self-promoter — convinced the attendant delegates to officially proclaim her “the foremost business woman of our race.”

In 1913, Walker also traveled throughout Latin America and the Caribbean promoting her business and recruiting others to teach her hair care methods; since more markets meant greater profits for her enterprises. While she traveled, her daughter, A’Lelia, helped facilitate the purchase of property in Harlem, New York. In 1916, upon returning from her travels, Walker moved to her new townhouse in Harlem. From there, she would continue to operate her business, while immersing herself in Harlem’s social and political culture, taking a special interest in the NAACP’s anti-lynching movement to which she contributed $5,000.

Walker used her wealth to oppose racism and support institutions to assist African-Americans. She said that she wanted to be a millionaire not for herself, but for the good she could do with it. Besides lecturing on these issues at various conventions, Walker also:

Unfortunately, by 1917, Walker’s breakneck pace was beginning to take its toll on her health, and she began suffering from overexertion, hypertension, and the beginnings of kidney disease. Walker died on May 25, 1919, from kidney failure and complications of hypertension at the age of fifty-one. Her last words reportedly were, “I want to live to help my race.”

At the time of her death Walker was considered to be the wealthiest African American woman in America. She was eulogized as the first female self-made millionaire in America, but Walker’s estate was only worth an estimated $600,000 (approximately $8 million in present-day dollars) upon her death. Her daughter, A’Lelia Walker, became the president of the Madame C.J. Walker Manufacturing Company.

Today there are two National Historic Landmarks associated with Madam Walker: her New York estate called Villa Lewaro, and the Madam Walker Theatre Center, built in Indianapolis in 1928, which is now a cultural arts center. She also appears on a commemorative United States Postal Service stamp as part of its Black Heritage Series.

Madam Walker, the First Black American Woman to Be a Self-Made Millionaire