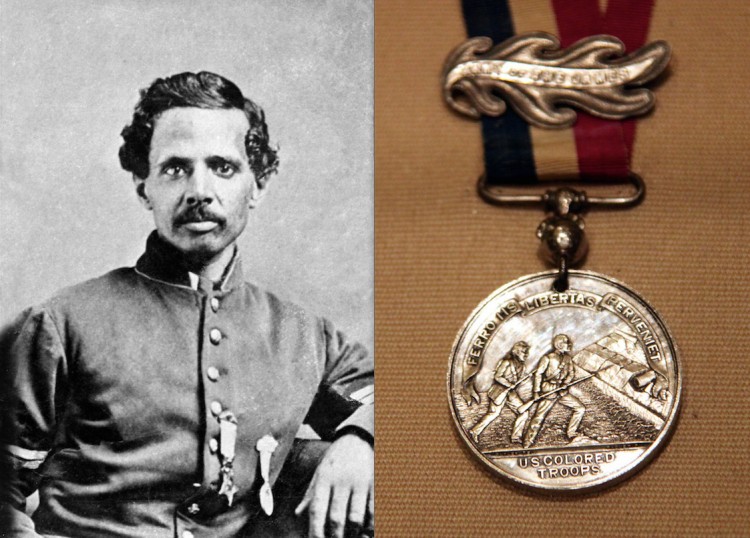 Civil War Congressional Medal of Honor Recipient Powhatan Beaty served as a First Sergeant in the Union Army in Company G, 5th U.S. Colored Infantry. Beaty is best known for his role in the Battle of Chaffin’s Farm (sometimes called Chapin’s Farm), also known as the Battle of Fort Harrison or, more broadly, the Battle of New Market Heights, in Virginia on September 29, 1864 which he was awarded the Medal of Honor. Beaty would later became an orator and actor, appearing in amateur theater productions in his home of Cincinnati, Ohio. His most well-known stage performance was an 1884 appearance at Ford’s Theater in Washington, D.C., opposite Henrietta Vinton Davis. 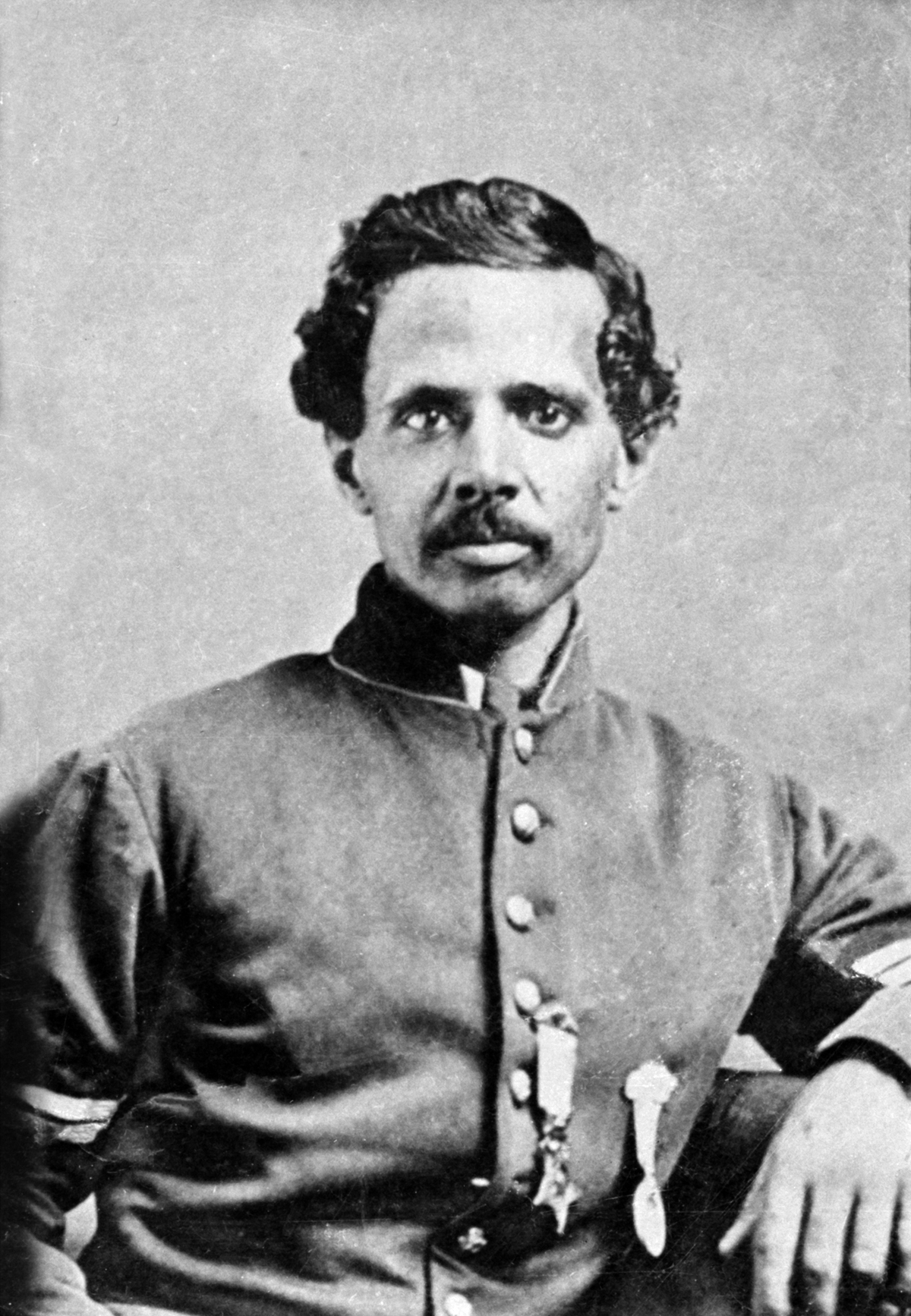 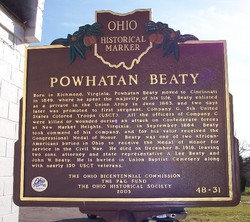 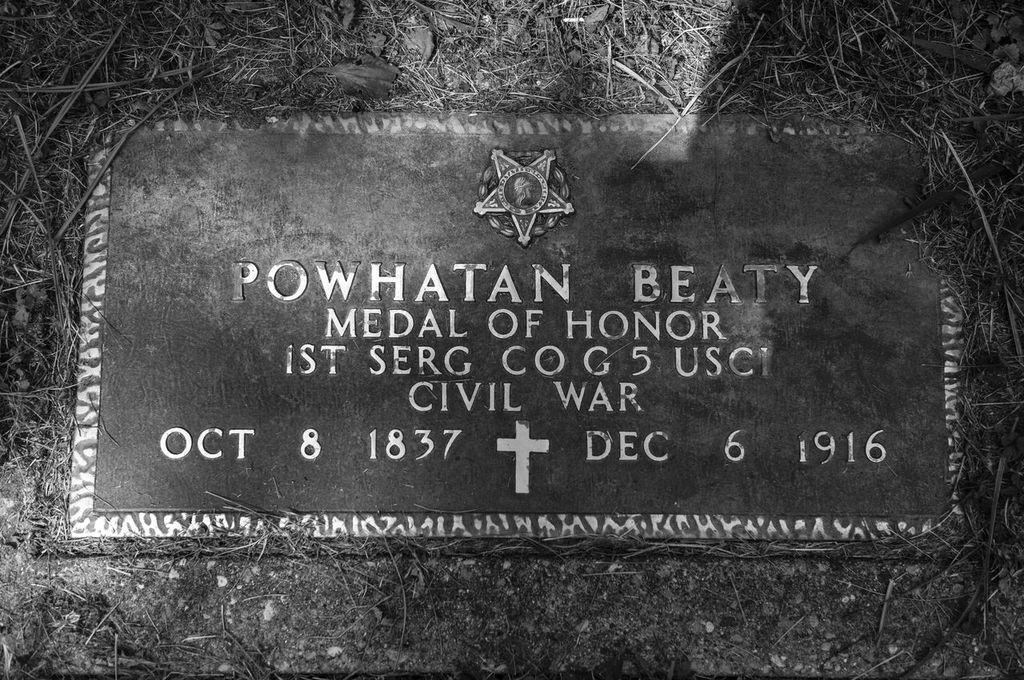 Born in Richmond, Virginia October 8, 1837, Beaty moved with his family to Cincinnati in 1849, where he spent the majority of his life. After serving in the Black Brigade, Powhatan Beaty enlisted as a private in Company G, of the 5th United States Colored Troops (USCT) on June 7, 1863. He was a 24-year-old farmer when he enlisted and stood 5′ 7″ tall. Powhatan Beaty was promoted to the rank of First Sergeant on June 9, 1863 at Camp Delaware, Ohio, just two days after enlisting. Beaty earned the Medal of Honor, one of only 20 African-American soldiers to do so in the Civil War, for bravery shown during a battle at Chaffin’s Farm (Fort Harrison), VA on September 29, 1864.

The Battle of New Market Heights was part of a larger effort by General Ulysses S. Grant to weaken Confederate Robert E. Lee’s defenses in order to take back the city of Richmond and the surrounding area of Petersburg, Virginia. The clash primarily took place on New Market Road in Henrico County, later a suburb of Richmond, and the battle is most noteworthy because it resulted in the eventual and permanent possession of the fort by Union forces. Beaty’s infantry was a part of the second wave of attacks in New Market Heights that took place at around 6 A.M. on 29 September 1864. The first wave was sent under the command of Union General Thomas Paine at around 5:30 A.M. and consisted of 685 men, of which 365 died. After the whyte officers of his unit had all either been killed or wounded, Beaty, although wounded himself, took command of his company and led the soldiers into battle until he was ordered to retreat. During the retreat, he noticed that the color-bearer had been killed and that the flag was no longer in sight. Amidst increasing gunfire, Beaty returned to the scene of warfare and retrieved the flag.

His citation reads Beaty “took command of his company, all the officers having been killed or wounded, and gallantly led it.” The Medal of Honor was presented to Powhatan Beaty on April 6, 1865.

After the Civil War, Beaty briefly worked as a porter on the Mississippi River steamboat City of Vicksburg. Upon returning to Cincinnati, Beaty went back to cabinetmaking and again took up acting. In the 1870s he began to perform publicly, and near the end of the decade he attained some recognition for his theatrical performances. Earlier in his career, Beaty had played Spartacus in Robert Montgomery Bird’s The Gladiator to favorable reviews in Cincinnati. Throughout the 1880s, he performed with the famed African American leading actress Henrietta Vinton Davis in Cincinnati, Washington, D.C., and Philadelphia. Beaty reportedly received high praise for his roles in Macbeth, Richard III, and Ingomar, the Barbarian in the New York Globe.

In 1880 Beaty wrote a play about the transition from slavery to freedom titled Delmar; or Scenes in Southland. The play was performed publicly in 1881 with Beaty himself starring in the leading role as the plantation owner. While there are no official reviews of the play, according to Errol G. Hill, a newspaper commentator, the script abounds in fine, dramatic situations. Finally, in 1888 Beaty became the drama director of the Literary and Dramatic Club of Cincinnati, a club that he had helped form. Little is known about Beaty’s life after 1890, but a historical marker that is a part of the Underground Railroad Heritage program states that he died on 6 December 1916, leaving two sons, attorney and state representative A. Lee Beaty and John W. Beaty (Grace, 50). As a testament to Beaty’s important place in U.S. history, more specifically his involvement in the Civil War, House Bill 897, dated 10 February 2000, designates the Interstate Route 895 (Pocahontas Parkway) bridge over Virginia Route 5 the Powhatan Beatty Memorial Bridge. Powhatan Beaty, along with many other prominent African American figures, is buried in the Union Baptist Cemetery in Cincinnati, the oldest African American religious burial ground still in use.