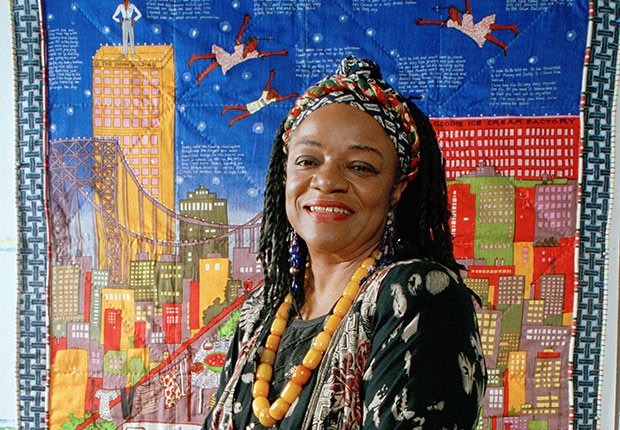 As a child, she was taught to sew fabrics creatively by her mother, a professional fashion designer; and to make quilts by her great-great-grandmother. Ringgold’s great-great-great grandmother was enslaved in her younger years, and made quilts for her whyte enslavers. There has been a strong African-American quilt-making tradition, influenced by the weaving done by the men in Africa, and brought to America with the enslaved, where women continued the tradition. Quilts in the African-American enslaved community served various purposes: warmth, preserving memories and events, storytelling, and even as “message boards” for the Underground Railroad to guide the enslaved on their way north to freedom. Some techniques common to African-American quilts included patchwork, applique and ‘crazy’ quilt; some characteristics included asymmetrical designs, bright colors and bold geometric shapes, which were spiritual symbols.

In 1950, she began studying art at New York’s City College, concentrating on painting. When she graduated, she began teaching art in the New York City public schools. She had also married, and eventually had two daughters. She received her Master’s degree in fine art in 1961. Soon after this, she went to Europe with her mother and her two daughters, to study the masters – Picasso, Matisse, Monet, and others. On her return, she began to paint seriously. This was in the early 1960’s, when the Civil Rights movement was becoming a major force in American society, affecting her and her work greatly. In the later ’60’s, her work also reflected the turmoil and change all over the country, in bold, graphic images in dark colors which reflected both the dark skin of African-Americans, and perhaps the dark times. 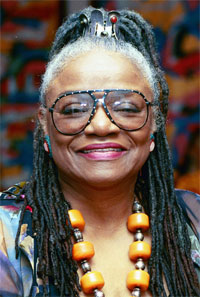 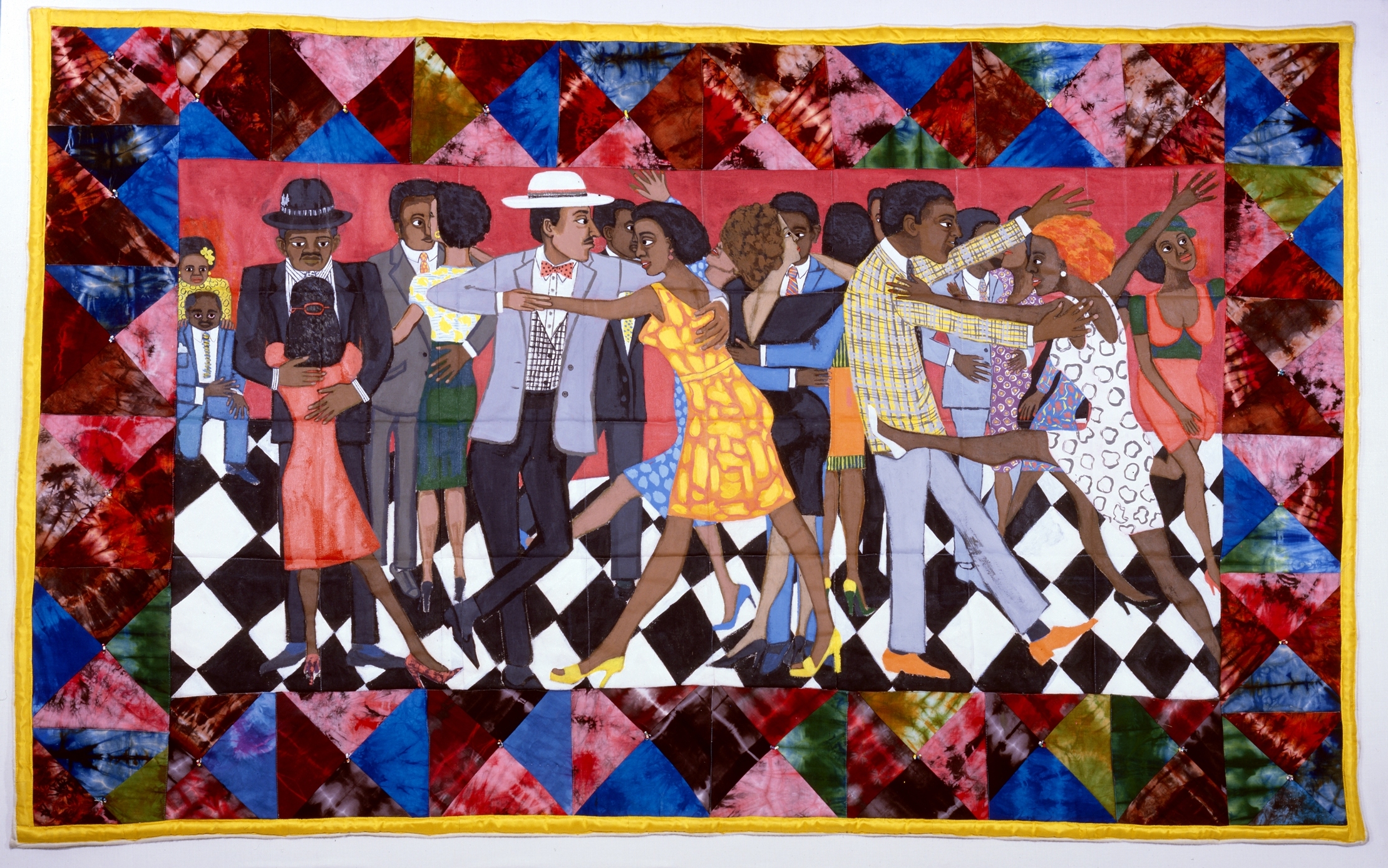 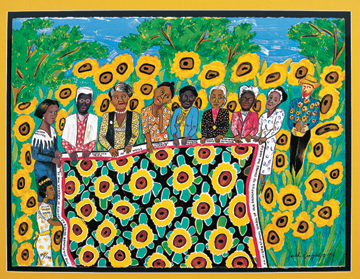 Ringgold’s oil paintings and posters begun in the mid-to-late 1960s carried strong political messages in support of the civil-rights movement. She demonstrated against the exclusion of black and female artists by New York’s Whitney Museum of American Art and the Museum of Modern Art in 1968–70. She was arrested for desecrating the American flag in 1970 as a participant in The People’s Flag Show, held at the Judson Memorial Church in New York. Ringgold cofounded Where We At, a group for African-American female artists, in 1971.

In 1970 Ringgold began teaching college courses. In 1973 she quit teaching in New York City public schools to devote more time to her art. In the early 1970s she abandoned traditional painting. Instead, Ringgold began making unstretched acrylic paintings on canvas with lush fabric borders like those of Tibetan thangkas. She worked with her mother, Willi Posey, to fashion elaborate hooded masks of fabric, beads, and raffia, which were inspired by African tribal costume. She also began making fabric “dolls” and larger stuffed figures, many of which resembled real individuals. Ringgold used some of these works in Performance pieces—the earliest of which, Wake and Resurrection of the Bicentennial Negro, was first performed in 1976 by students using her masks, life-size figures, and thangkas, along with voice, music, and dance. In 1976 and 1977 she traveled to West Africa.

Ringgold expanded the format of her thangka paintings to quilt size. Her mother pieced and quilted the first of these new works, Echoes of Harlem (1980), before dying in 1981. It was in 1983 that Ringgold began to combine image and handwritten text in her painted “story quilts,” which convey imaginative, open-ended narratives; in the first one, Who’s Afraid of Aunt Jemima? (1983), the familiar advertising character is turned into a savvy businesswoman. Ringgold’s use of craft techniques ignored the traditional distinction between fine art and craft, while demonstrating the importance of family, roots, and artistic collaboration.

From 1984 to 2002, Ringgold was a professor at the University of California, San Diego. She adapted the story quilt Tar Beach (from the Woman on a Bridge series of 1988) for an eponymous children’s book published in 1991. Its critical and popular success led to her development of several other titles for children. For adults, she wrote her memoirs, published in 1995.

Ringgold’s first solo gallery shows were held in 1967 and 1970 at the cooperative Spectrum Gallery, New York. Retrospectives of her work have been organized by Rutgers University, New Brunswick (1973), the Studio Museum in Harlem, New York (1984), and the Fine Arts Museum of Long Island, Hempstead (1990). Ringgold’s work has been included in numerous exhibitions devoted to political art, women’s art, contemporary quilts, and African-American art, as well as in the Whitney Biennial (1985). Her achievements as an artist, teacher, and activist have been recognized with numerous honors, including National Endowment for the Arts awards in sculpture (1978) and painting (1989), a John Simon Guggenheim Memorial Foundation Fellowship (1987), and sixteen honorary doctorates.

Today, a well known artist and grandmother of three, Ringgold resides in both New Jersey and San Diego, California, where she is a professor of art at the University of California at San Diego. As author and artist, she has won numerous awards, and her work is in the permanent collections of the Guggenheim Museum, the Museum of Modern Art, and the Metropolitan Museum of Art, all in New York City; she is also represented in many other museums and urban spaces around the world.

Her ‘motto’ on her site is If One Can, Anyone Can, All You Gotta Do Is Try.