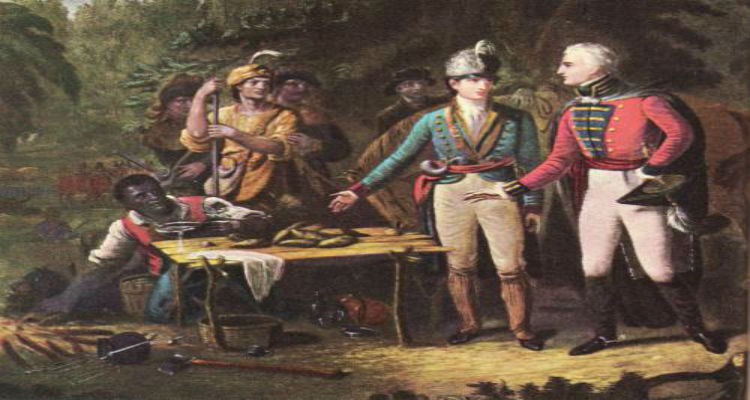 Oscar Marion was the personal servant of General Francis Marion (1732–1795). The general was the legendary “Swamp Fox” from South Carolina who bedeviled British Redcoats during the War of Independence. The 2000 movie, “The Patriot,” starring Mel Gibson, was based on Swamp Fox lore.

In December 2006, Oscar Marion was recognized as an “African American Patriot” in a ceremony at the U.S. Capitol, and a proclamation signed by President George W. Bush expressed the appreciation of a “grateful nation” for Oscar Marion’s “devoted and selfless consecration to the service of our country in the Armed Forces of the United States.” The occasion was a triumph for his distant cousin, genealogist Tina C. Jones, who researched his identity and pressed officials to honor him.

Following the custom of the times, Oscar was given the last name of his enslaver. He was one of perhaps 200 bondmen – many with the last name of Marion – who served Francis Marion. Legend has it that Oscar and Francis Marion grew up on the same plantation in Berkeley County, S.C., and that they played together as childhood friends in the 1730s. Francis Marion’s family owned the plantation.  They were probably about the same age, or at least of the same generation. In time, these childhood playmates would mature and, as adults, find fame as patriotic heroes and fierce guerrilla fighters in the Revolutionary War. Francis Marion grew up to become the general known to his enemies as the “Swamp Fox.” Oscar Marion’s place fighting alongside him has only recently come into full focus, although his role in the war has often been portrayed in art and literature over the past two centuries.

Jones unearthed Oscar Marion’s name while researching the Marion branch of her family, and became fascinated with the references she found to Francis Marion and the bondman who always accompanied him, sometimes referred to simply as Oscar.

Oscar Marion served in the 2nd Continental Army Regiment of South Carolina during the struggle for American independence. His volunteer service of seven years far exceeded the average enlisted soldier’s time on duty, and his combat experience was intense. Despite the social injustices he endured during a lifetime spent as a servant, Oscar was one of the most notable and best known among the bondmen having served as the general’s personal assistant, sous chef, bugler, oarsman and, of course, fighter.

It is believed that Oscar Marion appears in at least one painting of the general. Painted sometime between 1815 and 1825 by South Carolina artist John Blake White, it depicts Francis Marion, in a military hat, talking to a red-coated British officer. He extends his hand in a gesture that includes Oscar, who kneels low behind a small table, cooking sweet potatoes on the fire. The painting entitled “General Marion Inviting a British Officer to Share His Meal,” recreated a scene from 1781, when the enemies met to discuss an exchange of prisoners of war, and Francis Marion surprised the British officer by inviting him to share his modest meal.

In 1899, the oil-on-canvas painting was donated to the Senate, by the artist’s son. According to the Senate website, the White’s farm was next to the Marion’s, so when the artist was a boy he knew the General. Although the artist portrayed an African American cooking; a soldier, Samuel Weaver, was the actual cook. Weaver, a soldier had included the event in his pension application.

The African-American cook in the painting was not named, however, until Jones studied the painting and made a case that he was Oscar Marion. She presented her research to the Office of the Senate Curator, which cares for the Senate’s collection of 160 paintings and sculptures.

In the December 2006 ceremony, President George W. Bush and several congressmen recognized the image as representing Oscar Marion. The painting appeared on Confederate banknotes issued in South Carolina. It currently hangs in the third-floor corridor of the Senate Wing of the U.S. Capitol.

Following his seven years of service with Gen. Marion in the Revolutionary War, Oscar Marion likely returned with the general to the large Berkeley County, S.C., plantation. There is no evidence that Oscar ever married or had children. Jones did not find any direct descendants.