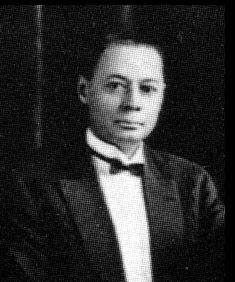 William Manuel “Bill” Johnson was an African American jazz musician, considered the father of the “slap” style of Double bass playing. Johnson who started out playing the guitar and mandolin switching to bass in the late 1890s is the founder of the Original Creole Orchestra.

Johnson was born on August 10th, 1874 in Talladega, Alabama. In interviews, Johnson asserted that his mother was Hattie Johnson, a mixed-race woman, and that his father was a well-known and respected whyte man, though he never identified his father by name.

Little is known about Johnson’s earliest musical experiences. All indications show that he was primarily a guitarist and mandolin player before the turn of the century. By 1900, Johnson was playing bass regularly at the New Orleans hotspot Tom Anderson’s Annex. Shortly after, Johnson joined the Big Four String Band as a mandolin player; by 1903, the group was carrying the New Orleans sound to Hattiesburg and Biloxi, Mississippi.

Johnson claimed to have started “slapping” the strings of his bass (a more vigorous technique than the classical pizzicato) after he accidentally broke his bow on the road with his band in northern Louisiana in the early 1910s. Other New Orleans string bass players picked up this style and spread it across the country with the spread of New Orleans Jazz.

Johnson was the founder and manager of the first jazz band to leave New Orleans and tour widely in the 1910s, The Original Creole Orchestra. Following a 1911 tour of the Southwest, Johnson and his band settled in Los Angeles, a city he would call home for the next three years. The band was offered a place on a prime vaudeville touring circuit in 1914, spreading its primordial version of jazz nationwide.

In Chicago in the early 1920s, Johnson became a key member of the King Oliver Creole Jazz Band when it opened Chicago’s Lincoln Gardens in June of 1922. Considered perhaps the best of the early ensemble style jazz bands with a veritable whos-who of New Orleans musicians, the band featured Oliver, brothers Johnny Dodds and Baby Dodds, and pianist Lil Hardin. On August 8th, 1922, during the band’s extended run at Lincoln Gardens, a twenty-one-year-old cornetist named Louis Armstrong joined the band in his first-ever Chicago engagement.

Johnson made many fine recordings in Chicago in the late 1920s. He taught younger Chicago musicians (including Milt Hinton) his “slap” style of string bass playing. During the 1950s he continued to play with various jazz bands and orchestras, sometimes working under other names. He was also involved in the import/export business along the USA-Mexico border.

Johnson’s brother Ollie “Dink” Johnson was also a noted musician and his sister Anita Gonzales was a common-law wife or perhaps married to Ferdinand “Jelly Roll” Morton during his stays in California.

Bill Johnson died in New Braunfels, Texas, at the age of 100.