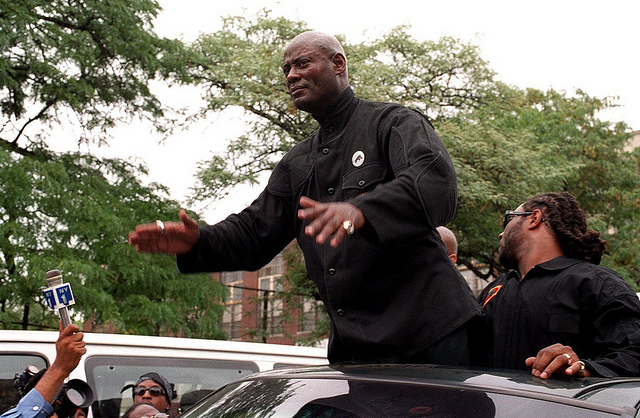 Khalid Abdul Muhammad was the militant spokesman of the Nation of Islam and Chairman of the New Black Panther Party. 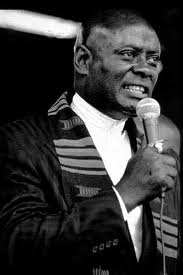 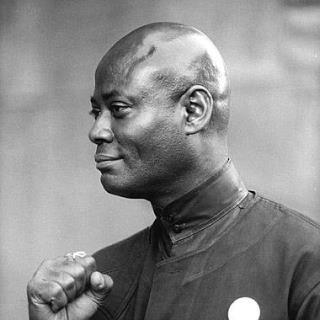 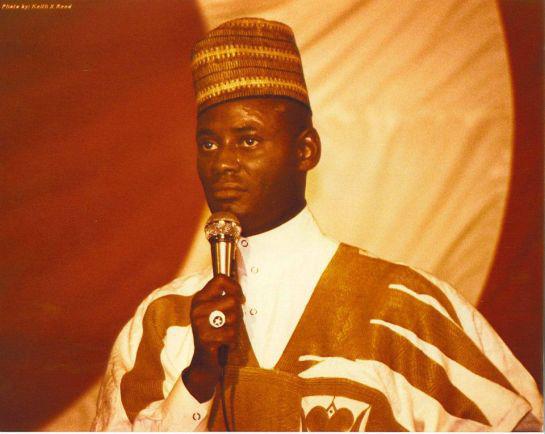 Born Harold Moor Jr. on January 12th, 1948, Khalid Abdul Muhammad was the second of six children to the late Harold Moore, Sr. and Lottie B. Moore. His Aunt Momma Carrie Moore Vann in Houston, Texas reared him. Minister Khalid Muhammad, affectionately known as “butch” by the family attended Bruce Elementary School, E.O. Smith Junior High School and all Black Phyllis Wheatley High School in Texas. At Phyllis Wheatley, Brother Khalid was an esteemed member of Stagecrafters, a group of exceptional students where he developed debate and drama skills under direction of Ms. Vernell Lillie. Minister Khalid as a young man would preach to cars from his porch as they passed by on the highway and was president of Houston Methodist Youth Fellowship. Khalid was a star quarterback, team captain of his high school football team, an eagle scout, a class officer and a star debater, young Khalid excelled in sports, debating and preaching in the Houston Methodist Youth Fellowship.

After graduating from high school in 1966, Muhammad enrolled at Dillard University. While on campus, he was introduced to the Nation of Islam. Speakers like Malcolm X and Louis Farrakhan—both members of the Nation of Islam— offered Black people another solution to their problems with racism, a homeland free of the white oppressor. He immediately joined the Nation of Islam and became a top recruiter. He also continued his studies and graduated from Pepperdine University in California. He pursued more intense studies at Harvard, Yale and Columbia Universities.

Farrakhan first met Muhammad at Dillard University in 1967. The young student came to hear Farrakhan speak and enthusiastically embraced the tenets of the Nation of Islam. Farrakhan recalled in Emerge: “In my effort to rebuild the work of the Honorable Elijah Muhammad, he was one of the first to come by my side. And when I had no security, just standing up teaching, I would see Brother Khalid standing beside me with a Bible in his hands. And I wondered why he was standing with the Bible. And once he opened the Bible and he had cut the Bible out and in the Bible was a pistol that he had to defend his brother. I had to say, ’No, Brother Khalid, we don’t need that.”

After the death of the Hon. Elijah Muhammad in 1975, the N.O.I. was dismantled by Elijah Muhammad’s son Wallace D. Mohammed, who turned the organization toward Arab styled, orthodox Islam. Even though the N.O.I. had basically disappeared by 1977, Khalid, now known as Malik Rushaddin, remained militant, travelling and training for revolution throughout Africa, including Uganda (with Idi Amin) to liberate South Africa from white rule.

He returned to the U.S. to help build Louis Farrakhan’s branch of the Nation of Islam. Given his name by Farrakhan, Khalid Abdul Muhammad once again, quickly became a top recruiter and served as Minister in the powerful Los Angeles and New York N.O.I. Mosques. He was also N.O.I. Minister of Defense, Supreme Captain and National Representative in 1991.

In his position as National Representative, he was for the first time given an opportunity to speak before national audiences. “Ironically, it was a position held by both Malcolm X and Louis Farrakhan under Elijah Muhammad,” noted Emerge reporter Sylvester Monroe. “It also historically has been a post from which the holder has often gained a following and stature of his own, as both Malcolm X and Farrakhan did.”

A true Pan Afrikanist, Minister Khalid Muhammad has traveled on research and fact-finding missions to Kemet (Egypt) Jerusalem, South Afrika and throughout the African continent. He made his pilgrimage to the Holy City, Mecca, numerous times. He has earned the title El Hajj Khalid Abdul Muhammad. Minister Khallid Abdul Muhammad was the creator and founder of The New African Cultural Holiday alternative to Thanksgiving called “GYE NYAME (G-NY-MAY). Black youth and “gang” members loved Dr. Khalid. He has been heard on rap albums from Tupac Shakur, Ice Cube, Sista Souljah, X-Clan, Public Enemy, Scar-Face, Shaquille O’Neill, Erica Badu, Lauren Hill, Dead Prez, Capone N’ Noriega and the Black Lyrical Terrorist. He spoke at many churches and served as a minister at the 1st Afrocentric Temple in Atlanta, Georgia before his transition to the ancestors.

Indeed, by virtue of his fiery oratory and his uncompromising message, Muhammad did become known as the “new Malcolm X.”  Professor Griff, a former member of Public Enemy, told Newsday that rappers responded to Muhammad because “the brother has a spirit… If you are about revolution and change you have to lend him your heart as well as your ear.” Some Los Angeles gang members seemed to have been positively influenced by the dynamic minister as well. Emerge reported that several ex-gang members who played leading roles in the Los Angeles truce of 1992 joined the sect in response to Muhammad’s calling.

In May, 1994 an assassination attempt was made on his life. Khalid Muhammad was blessed to recover and fight with even more vigor and intensity. Due to escalating controversy from a speech made at Kean College, Dr. Khalid was dismissed from his positions in the N.O.I. by Louis Farrakhan in 1994. Muhammad moved to Texas and established the New Black Panther Party. In June of 1998, James Byrd Jr. of Jasper, Texas, reportedly took a ride with three white men, who savagely beat him and tied him to the back of a truck before dragging him to his death. The nation was shocked and appalled. Muhammad led armed members of both of his groups in Jasper, Texas, to protest the murder. “We are here to say that violence and racism and hatred of the white man in America is just as American as apple and cherry pie,” Muhammad told The Associated Press, reprinted at ABCNews.com.

Muhammad, along with Malik Zulu Shabazz and Erica Ford, began organizing a Million Youth March in Harlem in 1998. Many other local Black leaders denounced the march, including former U.S representative Floyd Flake and Congressman Charles Rangel. Mayor Rudolph Giuliani called it a “hate march” and refused to grant a permit. Muhammad sued in federal court and won. An appeals court limited the march to six blocks and to four hours.

After giving the keynote speech at the Tubman School in Harlem, Muhammad reportedly had a stroke. It was later confirmed that he had a brain aneurysm. He died in an Atlanta hospital on February 17, 2001.