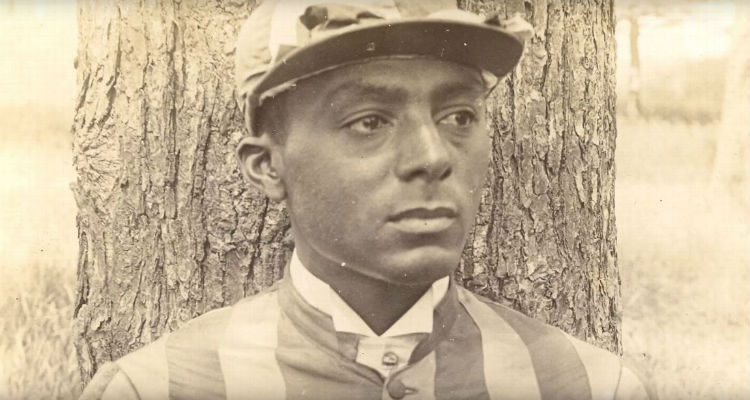 Isaac Burns Murphy was an African-American Hall of Fame jockey, who is considered one of the greatest riders in American Thoroughbred horse racing history. Murphy rode in the Kentucky Derby 11 times and was the first jockey to win successive Derby crowns. He was also the first three-time winner: Buchanan in 1884, Riley in 1890, and Kingman in 1891. Isaac Burns Murphy was the first jockey to be inducted into the National Museum of Racing and Hall of Fame at its creation in 1955.

Isaac Burns Murphy was born on April 16, 1861, in Frankfort, Kentucky. Much of Murphy’s early life is shrouded in speculation and legend. There is conflicting research as to whether his parents were free or enslaved and whether his father died as a Confederate POW or of “camp fever” (typhus). However, it is believed that his father, James Burns, joined the Union Army and died during his military service. Isaac was only a toddler at the time.

Sometime around 1864, Isaac’s mother moved the family to Lexington, Kentucky, to live with her father, Green Murphy, and began working as a laundress. One of her customers owned a racing stable, and sometimes she took Isaac with her. Isaac made himself useful by cleaning stalls and exercising the horses. Occasionally Eli Jordon, the Black trainer at the stable, let Isaac help with breaking the yearlings. Jordon admired Isaac’s self-discipline and good humor. In 1875, he decided to put the 14-year-old boy in his first race. Isaac lost. One year later, Isaac Burns Murphy had become the jockey to watch. When Isaac began racing, he changed his name to Isaac Burns Murphy, in honor of his grandfather, who was a loving figure in his life.

In the South at that time it was not unusual for African Americans to be working at the stables as riders, trainers, and stable boys. Wealthy Euro-Americans imported Thoroughbred horses, and many had bondpeople to care for them. The workers became skilled horsemen, and the tradition continued through the late 1800s. In the first Kentucky Derby in 1875, fifteen of the seventeen riders were Black. This was no anomaly; within the next 28 years, the Derby was won fifteen times by an African American jockeys.

As a rider, Isaac Burns Murphy developed a unique style sitting upright in the saddle. He was an intuitive rider who encouraged speed through soft words, not through the whip; and occasionally used his spurs to urge the horse on. Instead of riding the horse as hard as possible, he would develop a race strategy, pacing the horse through the field before moving into a favorable position to burst in front at the finish line.

Murphy won his first race on September 15, 1875, at Lexington Crab Orchard. By the end of 1876, he had won 11 races, and the next year 19; and had begun to attract national attention. In a race in 1877 in Saratoga, one of the racing reporters described Murphy’s win: “he came home like a hurricane.” Another wrote: “He has a steady hand, a quick eye, a cool head, and a bold heart.”

In 1884, Murphy won the American Derby in Chicago, Illinois, which was at the time the most prestigious race in the nation. He would repeat wins there in 1885, 1886, and 1888. On May 27, 1884, Murphy got his first Kentucky Derby win and would win twice more, in 1890 and 1891. He was the first jockey to win successive Derby races and was also its first three-time winner.

Murphy’s career record is astounding by any measurement. According to his own calculations, he won 628 of his 1,412 starts—a 44% victory rate that has never been equaled. More recent statisticians who have studied his races report that he had 539 wins in 1,538 rides, still an unprecedented 34-percent winning rate.

At the height of his career, Murphy was averaging $15,000 a year, excluding bonuses, making him the highest-paid jockey in the United States at that time.

In one of his most storied contests, on June 25, 1890, Murphy raced against whyte jockey Ed “Snapper” Garrison to determine who was the better jockey. In an atmosphere of Jim Crow segregation and exclusion for many African-Americans, the race took on clear racial overtones. Murphy won in a close finish, which further divided the horse-racing community.

Two months later, Murphy competed at the Monmouth Handicap, in New Jersey. He performed poorly during the race and at the post-race inspection, he fell off his mount. Suspected of being drunk, he was suspended for 30 days, though intoxication was never proven. Later investigations indicated that he may have been poisoned.

Murphy married Lucy Osborn and purchased a large home in Lexington (the purchase of which was noted in The New York Times, 1887). They were prominent members of the Baptist Church. As his career grew, he enjoyed the good life. He loved dressing well and buying jewelry for his wife. He also started a small racing stable of his own.

The demon that haunted him, however, was his weight. During the off-season, his normal weight was 130-140 pounds. To make weight during the racing season, he needed to get down to 110. As the business grew, the rules changed somewhat; weight requirements edged up to 118 and then 122. These were still tough weight goals for Murphy to reach. Jockeys—including Murphy—tended to use a diet system known as “flipping.” This was forced vomiting, what we now know as bulimia. Murphy usually made weight, but it was at a high cost to his body.

Murphy died of heart failure in 1896 in Lexington, Kentucky, and over time his unmarked grave in African Cemetery No. 2 was forgotten. During the 1960s, Frank B. Borries Jr., a University of Kentucky press specialist, spent three years searching for the gravesite. In 1967, Murphy was reinterred at the old Man o’ War burial site. With the building of the Kentucky Horse Park, his remains were moved to be buried again next to Man o’ War at the entrance to the park.

Since 1995, the National Turf Writers Association has given the Isaac Murphy Award to the jockey with the highest winning percentage for the year in North American racing (from a minimum of 500 mounts).

For Freckled-Faced Gerald by Etheridge Knight