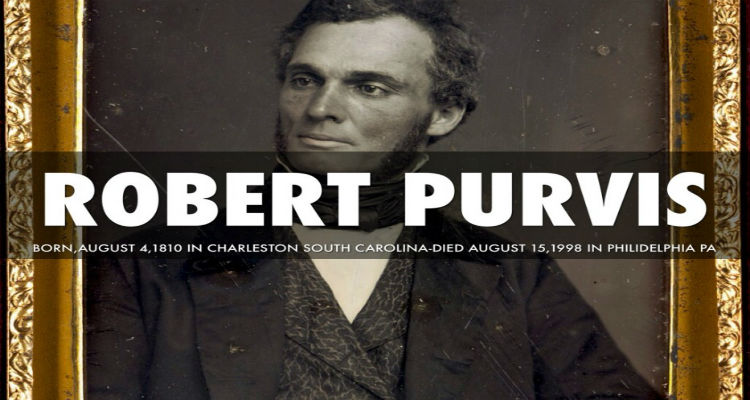 Robert Purvis was a radical African American abolitionist and reformer as well as a prosperous gentleman farmer and businessman.

Born on August 4, 1810 in Charleston, South Carolina, Purvis was the second of three sons born to a whyte cotton merchant and a free woman of color, young Purvis was to be a determined opponent of the Maafa (slavery).

At the age of nine, his father sent the family to Philadelphia where Purvis enrolled in the Pennsylvania Abolition Society’s Clarkson School. He later attended Amherst College in Massachusetts. His father’s death left the family well off financially and with shrewd business savvy; Purvis put his commerce sense to good use. Light-skinned and wealthy, he rejected suggestions that he relocate and “pass.” In 1831, he married Harriet Forten, the daughter of African- American businessman and abolitionist James Forten. Throwing himself into the antislavery struggle, he tirelessly worked with the Philadelphia Vigilance Committee. They sheltered runaway enslaved persons in Purvis’ “safe house.”

In 1833, Robert Purvis also helped to establish the Library Company of Colored People as well as the Anti-Slavery Society in Philadelphia, both of which engaged in abolitionist activity. In that same year, Purvis also became associated with William Lloyd Garrison’s American Anti-slavery Society and in 1834 traveled to Europe to speak publicly, raise funds and engage in meetings with high ranking European officials in the campaign to end the Maafa. His luxurious Philadelphia home was now well known for entertaining distinguished abolitionists from both America and from Europe.

Purvis was also active in such organizations as the American Moral Reform Society, the Woman Suffrage Society, and the Committee of 100 for the Purification of Municipal Affairs in Philadelphia. He remained active in his campaign to repeal Pennsylvania state laws that barred African Americans from voting. In his effort, Purvis drafted the document “Appeal of Forty Thousand Citizens Threatened with Disfranchisement” in 1838.

Purvis also served as President of the Pennsylvania Anti-Slavery Society between 1845 and 1850, the first African American to lead a predominately white anti-slavery organization. His political efforts were also directed toward prison reform and prohibition.

As a gentleman farmer, he developed a showplace at Byberry and prizewinning livestock. He also owned a second farm and several pieces of real estate in Philadelphia, including mercantile property on Market Street. He died on April 15, 1898, in Philadelphia.