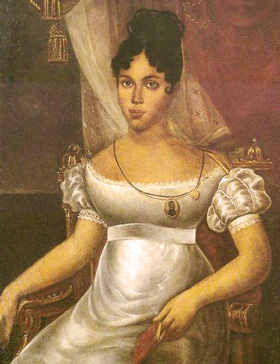 Marie-Madeleine Lachenais, known as Joust was called “The President of two Presidents” and was the most politically powerful woman in the history of Haiti. She was the mistress and political advisor of president Alexandre Sabès Pétion and president Jean-Pierre Boyer and exerted a significant influence over the affairs of state during their presidencies, for a period of 36 years (1807–1843).

Marie-Madeleine Lachenais was born in Arcahaie in 1778 the daughter of Marie Thérèse Fabre and the French colonel de Lachenais. She had a relationship with Alexandre Petion, with whom she had two daughters, Cecile and Hersilie. In 1807, Alexandre Petion became president, and she acted as his adviser. Petion appointed Jean-Pierre Boyer as his successor with her support.

In 1818 Pétion died and Boyer replaced him as the second President of the Republic of Haiti. Marie-Madeleine functioned as mistress and political adviser to Boyer, and had a daughter, Azema, with him. Her will affected the acts passed in parliament between 1818 and 1840. In 1838, she persuaded Boyer to remain as president when he contemplated stepping down. She also revealed and prevented a planned coup against Boyer’s presidency.

After the deposition of Boyer in 1843, Lachenais and her daughters referred to as Boyer’s family were escorted to a ship to follow Boyer in his exile to Jamaica, on 13 February 1843. She and her daughters lived on a pension from Haiti, which was officially only granted to her daughter Cecile. Boyer is reported to have married her, or to have had plans to marry her, shortly before her death.

She died shortly after her arrival in Jamaica on the 22 July 1843.