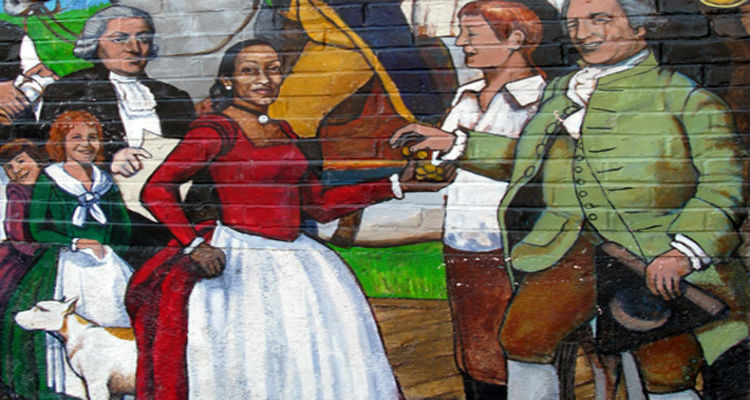 Jenny Slew was a Black woman kidnapped into American slavery, who later petitioned for her freedom in court. Slew was the first ‘enslaved’ person to win her freedom by jury trial in the US. The court also awarded her damages.

Jenny Slew was born circa 1719 to a free whyte woman and an enslaved black man. Slew married one or more black men who were enslaved but lived her life as a free woman in the Bay conlony until 1762. While in her early forties, she was kidnapped from her home and enslaved by John Whipple Jr. from January 29, 1762 to March 5, 1765.

In 1765, Slew filed a civil suit against Whipple, maintaining that since a child’s legal status follows that of the mother, she, too, like her mother deserved her freedom. Hence, she charged Whipple with holding her in bondage illegally. Though Massachusetts was one of the few colonies to allow enslaved persons to bring civil suits in courts, Slew still faced obstacles to getting her case serious consideration from the justices. Dismissing the case on a technicality, the justices chastised Slew for filing her complaint in the wrong jurisdiction and misrepresenting herself as a spinster since she was once married. In the end, the court ruled in favor of Whipple and ordered Slew to pay court costs.

Still determined, however, Slew later appealed to the Superior Court, and this time, she stood trial by jury. During the trial, Whipple argued that he possessed a bill of sale for Slew, and thus challenged her kidnapping charges. He also maintained that her status as a married woman nullified her legal right to sue; her husband, he argued, would have to sue on her behalf since married women’s legal rights were subsumed by those of her husband under the doctrine of couverture. The court did not agree as Slew had been married to other enslaved men, so the validity of her marriage was in question. Therefore, this time, Slew won her case against Whipple for capturing her “with force and arms,” and keeping her enslaved and doing “other injuries against the peace” and to her. The law was simple; a child took on the mother’s status, Jenny’s mother was white. So by law, Jenny was not a slave. Slew became the first ‘enslaved’ person to win her freedom by jury trial. For her troubles, the jury awarded Slew court costs and four pounds in damages.