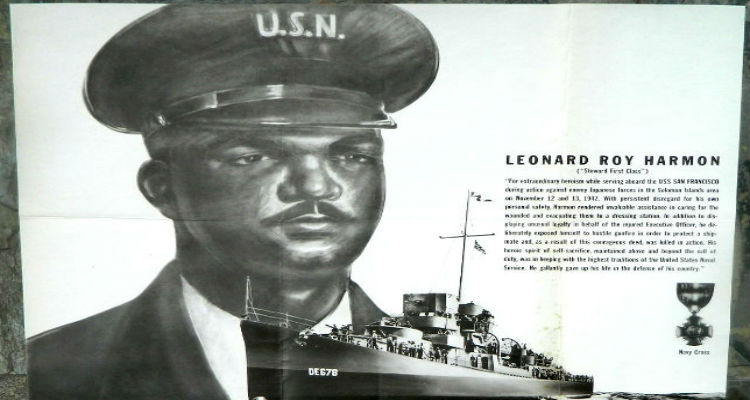 Leonard Roy Harmon was an African American sailor who died in action during World War II and was posthumously awarded the Navy Cross for his valor. The USS Harmon (DE-678) was named in his honor, and was the first warship to be named after a Black man.

Harmon, born in Cuero, Texas, on 21 January 1917. Harmon enlisted in the Navy in June 1939 and was assigned to USS San Francisco (CA-38) following training. He trained as a mess attendant, one of the few jobs available to Black men in the navy at that time. The basic job description consisted of serving food to officers and crew aboard ship. However, like all members of a ship’s crew they were also trained in damage control and had stations to report to during general quarters. During his service he became a Mess Attendant First Class.

During the World War II Battle of Guadalcanal, on November 12, 1942, a Japanese plane crashed into the radar and fire control station of the “San Francisco,” causing 50 casualties. The following day, November 13, as the naval battle continued, several officers on the bridge were struck by enemy gunfire. During the course of the naval battle he assisted in evacuating and caring for the wounded. He deliberately exposed himself to enemy gunfire while attempting to protect a shipmate and was killed in action.

For his heroism, Harmon was posthumously awarded the Navy Cross. Two Navy ships were named in honor of Mess Attendant First Class Leonard Roy Harmon. The first, Harmon (DE-72), was transferred to the British Royal Navy in June 1943, prior to completion, and was renamed HMS Aylmer. The second ship, USS Harmon (DE-678), served actively from 1943 to 1947 and remained in the Reserve Fleet until 1967.