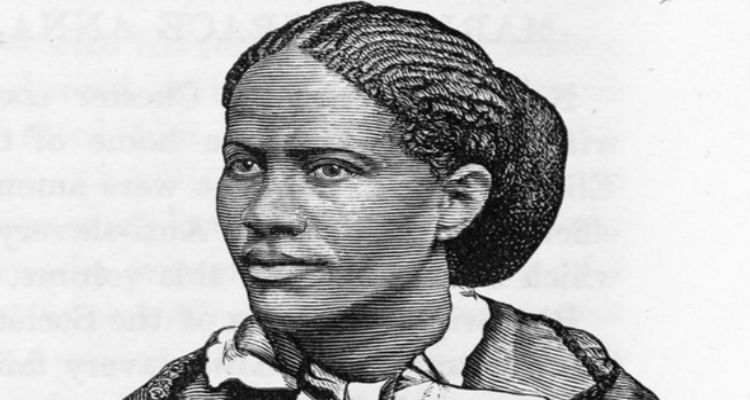 Frances E.W. Harper was a leading African-American poet and writer. She was also an ardent activist in the abolitionist and women’s rights movements. Harper had a long and prolific career, publishing her first book of poetry at age 20 and her widely praised novel Iola Leroy, at age 67.

Frances Ellen Watkins was born on September 24, 1825, in Baltimore, Maryland, only child of free parents. She was orphaned when she was three and was raised by an aunt and uncle. Her uncle, Rev. William Watkins, was a civil rights activist, and Harper was educated at his Academy for African-American children. He was a major influence on her life and work.

Bright and talented, Harper started writing poetry in her youth. She kept on writing while working for a Quaker family after finishing school. Self-supporting by age thirteen and largely self-educated, she published in 1845, a book of poetry and prose, titled Forest Leaves (alternatively called Autumn Leaves), of which no copies survive.

In 1850, she moved from Maryland, a Maafa (slavery) state, to Ohio, a free state. In Ohio she taught domestic science as the first woman faculty member at Union Seminary, an African Methodist Episcopal (AME) school which later was merged into Wilberforce University. The school was run by leading abolitionist John Brown. A new law in 1853 prohibited any free Black persons from re-entering Maryland, so in 1854, Harper moved to Pennsylvania for a teaching job in Little York. The next year she moved to Philadelphia. During these years, she embarked on a career as a traveling speaker on the abolitionist circuit. She helped enslaved African-Americans escape through the Underground Railroad and wrote frequently for anti-slavery newspapers, earning her a reputation as the mother of African American journalism.

A prolific writer, Harper published many collections of poetry, including Poems on Miscellaneous Subjects (1854), which was reprinted 20 times and sold 10,000 copies in its first five years. She became the most popular woman poet of her day, and an in-demand lecturer on behalf of the abolitionist movement, appearing with the likes of Frederick Douglass, William Garrison, Lucretia Mott and Lucy Stone.

In 1858, she refused to give up her seat or ride in the “colored” section of a segregated trolley car in Philadelphia (100 years before Rosa Parks). She made literary history in 1859 with the publication of Two Offers. With this work, she became the first African-American female writer to publish a short story. The following year, on November 22, 1860, she married Fenton Harper, a widower with three children. Harper retreated from public life, choosing to live with her husband and children in Ohio. In 1862, she gave birth to a daughter, Mary Frances, who became a teacher.

In 1864, Harper returned to the lecture circuit after the death of her husband, financing the tour herself and taking her daughter with her. Harper visited the South and saw the appalling conditions, especially of black women, of Reconstruction. She lectured on the need for equal rights for “the Colored Race” and also on rights for women. She founded YMCA Sunday Schools, and she was a leader in the Women’s Christian Temperance Union (WCTU). She joined the American Equal Rights Association and the American Women’s Suffrage Association, working with the branch of the women’s movement that worked for both racial and women’s equality.

She also produced several long-form poems, including Moses: A Story of the Nile (1869) and Sketches of Southern Life (1872), which explored her experiences during the reconstruction.

She had three novels serialized in a Christian magazine from 1868 to 1888, before publishing her most famous novel Iola Leroy in 1892, written when she was sixty-seven years old. At one time considered the first novel by an African American, it is one of the earliest. (Discoveries of earlier works by Harriet E. Wilson and William Wells Brown have displaced Harper’s work.) While using the conventions of the time, she dealt with serious social issues, including education for women, passing, miscegenation, abolition, reconstruction, temperance, and social responsibility.

In 1893, a group of women gathered in connection with the World’s Fair as the World’s Congress of Representative Women. Harper joined with others including Fannie Barrier Williams to charge those organizing the gathering with excluding African American women. Harper’s address at the Columbian Exposition was on “Women’s Political Future.”

Realizing the virtual exclusion of black women from the suffrage movement, Frances Ellen Watkins Harper joined with Ida Wells-Barnett, Harriet Tubman and several others to form the National Association of Colored Women. She became the first vice-president of the organization, which sought to improve the lives and advance the rights of African-American women.

By the turn of the century, Harper began to scale down her activities, though she still worked to support such causes as women’s suffrage and such organizations as the NACW and the Women’s Christian Temperance Union.

Harper died of heart failure on February 22, 1911, in Philadelphia, Pennsylvania. She was buried next to her daughter, Mary, at Eden Cemetery.

In an obituary, W.E.B. duBois said that it was “for her attempts to forward literature among colored people that Frances Harper deserves to be remembered. She took her writing soberly and earnestly, she gave her life to it.”

Her work was largely neglected and forgotten until she was “rediscovered” in the late 20th century.