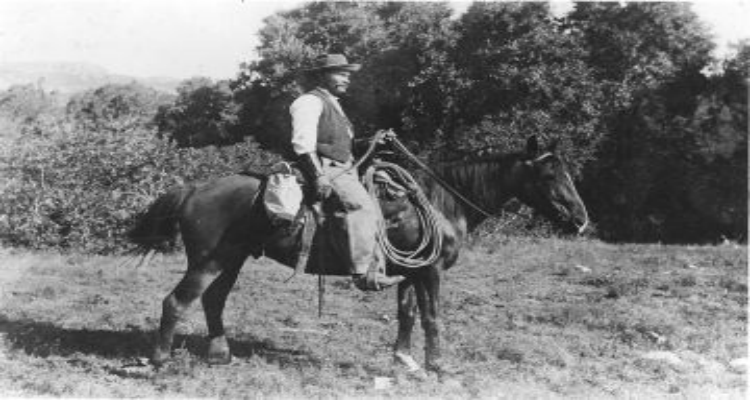 George McJunkin was an African American cowboy in New Mexico, who discovered the Folsom Site in 1908. McJunkin’s discovery of the Folsom Site changed New World archaeology, as it showed that people had inhabited North America since at least 9000 BCE, some 7000 years earlier than previously thought.

McJunkin was born in 1851, during the Maafa (slavery) era in Texas. His father was a blacksmith. He became free at age 14 with the Civil War’s end; already fluent in Spanish, experienced with horses, and used to helping his father in his blacksmith shop, but he had never had the opportunity to learn to read. He joined his first cattle drive at 17, which got him as far as Comanche.

As a trail boss bound for Dodge City, Kansas, he left Texas for good. Along the way, he bought a pair of boots and became a cowboy. Historian Mary Germond wrote, according to The Root, “He assisted the cook, learned to tell time by following the night stars, survived his first stampede, outfitted himself to look like a real cowboy, purchasing a hat, pants, and a used saddle. He became known as an exceptional broncobuster and roper.”

In the 1880s he settled in New Mexico’s Dry Cimarron Valley, where he eventually became foreman of the Crowfoot Ranch, supervising Mexicans and Euro-Americans. At some point on the trail, McJunkin had learned to read; it’s said that he traded other cowboys horse-riding and horse-breaking lessons for reading lessons. He was known to be a voracious reader and avid collector of books and artifacts, with an unbridled passion for acquiring knowledge, particularly in the sciences. The amateur naturalist had exceptional carpentry skills and built a cabin to house himself and his findings.

In 1908, after a flood which killed 15 people in Folsom, McJunkin, as ranch foreman, had to assess the damage done to the ranch. While patching fence, McJunkin entered a huge gully created by the flood in an area called the Dead (or Wild) Horse Arroyo, where he discovered remains of a giant prehistoric bison, now contained in the Smithsonian. Giant Bison of the type McJunkin discovered had gone extinct at the end of the last Ice Age. Recognizing the significance of the find, McJunkin left the site undisturbed and alerted archaeologists. For many years he tried, and failed, to enlist acquaintances to come out to the “Bone Pit.”

George McJunkin never married nor had children. He did not live long enough to learn of the scientific recognition of the significance of his discovery. He died in January 1922, and was buried at the Folsom Cemetery in Folsom, New Mexico.

Seven months after his death, two fellow hobbyists named Carl Schwacheim and Fred Howarth visited the bone site McJunkin had invited them to so many times before. Finally understanding the enormity of his discovery, they pursued their friend’s quest. It would be four years before the site was formally excavated by archaeologists from the Colorado Museum of Natural History. The remains the team unearthed allowed them to identify Bison antiquus, about twice the size of modern American bison and extinct for some 10,000 years.

More incredible than the fossils themselves was the discovery of the spear point embedded between the bison’s ribs, now called a Folsom point; proof that humans had lived in North America much earlier than previously believed.

In the 1950s, through the use of the recently developed technique of carbon-14 testing, the spear points found at the site were dated as far back as 9000 B.C. Until then, human habitation of North America had been placed at 3,000 or 4,000 years ago, but the spear points pushed that date back an incredible 7,000 years. The archeological site would eventually yielded human remains that became known as “Folsom Man”.

Schwacheim and Howarth were acknowledged in the early literature about the Folsom findings; McJunkin was not. A half-century after McJunkin died, his role in archeological history unknown, a Paleo-Indian archaeologist at Eastern New Mexico University named George Agogino learned the history of the Folsom site and finally gave McJunkin the credit he was due for the discovery of the bones that shifted the timeline of human settlement in North America.

Thank you for sharing such a great wealth of knowledge, it’s so nice to learn about our history in a positive light so that we may want to research more and teach our children things they will never learn or be exposed to in school! Thank You