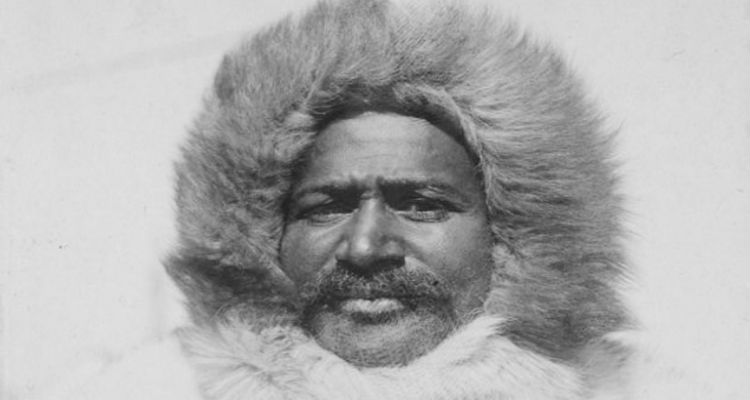 [dropcap size=small]M[/dropcap]atthew Alexander Henson was the first African-American Arctic explorer, the first man to reach the north pole, of which he was co-discoverer with Robert Peary. Henson and Peary  made seven voyages over a period of nearly 23 years. There is some debate as to whether Peary was accurate in his claim to have reached the pole,  but Henson went ahead to blaze the trail while Peary, whose toes were frozen, was pulled on the sledge. Henson  reach the pole, some 45 minutes ahead of Peary, and planted the American flag at the location Peary determined to be the pole, since Peary was unable to stand.

Henson was born on August 8, 1866, in Charles County, Maryland, the son of two freeborn Black sharecroppers, Henson lost his mother at an early age. When he was 4 years old, his father moved the family to Washington, D.C., in search for work opportunities. His father died there, leaving Henson and his siblings in the care of relatives. Henson ran away from home at age 11, and ended up in Washington D.C., where he lived with his aunt. He became excited by sea stories that he heard from a man called Baltimore Jack and walked to Baltimore, where he hung around the waterfront. At age 12, he became a cabin boy on a merchant ship named Katie Hines. Over the next six years Captain Childs took Henson under his wing, treating him like a son and teaching him maths, history, geography and navigation skills. Henson sailed around the world with Childs, visiting places such as China, Japan, the Philippines, France, Africa, and southern Russia.

After Captain Childs died, Henson returned to Washington, D.C. and worked as a store clerk for a furrier. It was there that he met Robert Edwin Peary, an explorer and officer in the U.S. Navy Corps of Civil Engineers. On the recommendation of the store owner, Peary hired Henson  to accompany him to Nicaragua to survey a canal route. Peary soon learn that Henson was an experienced seaman who also knew how to prepare a survey chart. In 1891, Henson and Peary prepared for their first trip to the North Pole. For nearly two decades the pair would be on a quest to reach the pole. 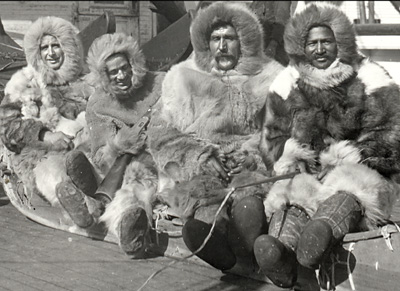 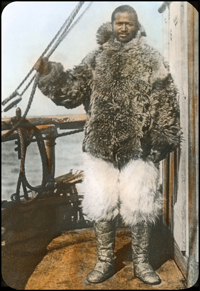 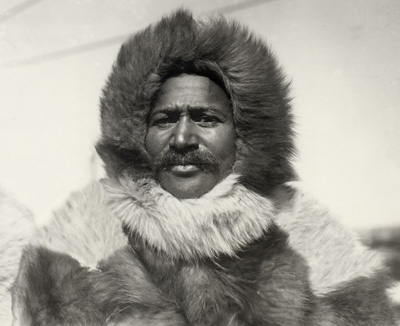 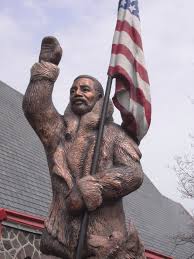 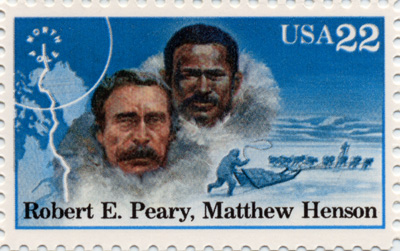 While in Greenland, Henson embraced the local Eskimo culture, becoming fluent in the Inuit language and their Arctic survival skills. The Inuit called him Mahri-Pahluk (Matthew-the Kind One). Henson is the only non-Inuit who became skilled in driving the dog sleds and training dog teams in the Inuit way. He was a skilled craftsman, who made most of the sledges used by the expedition, and build igloos out of snow, for mobile housing as they traveled. He and Peary with their teams covered thousands of miles in dog sleds and reached the “Farthest North” point of any Arctic expedition in 1906.

In 1908–09, Peary mounted his eighth attempt to reach the North Pole. The expedition was large, as Peary planned to use his system of setting up cached supplies along the way. When he and Henson boarded his ship Roosevelt, leaving Greenland on August 18, 1909, they were accompanied by:

“22 Inuit men, 17 Inuit women, 10 children, 246 dogs, 70 tons (64 metric tons) of whale meat from Labrador, the meat and blubber of 50 walruses, hunting equipment, and tons of coal. In February, Henson and Peary departed their anchored ship at Ellesmere Island’s Cape Sheridan, with the Inuit men and 130 dogs working to lay a trail and supplies along the route to the Pole.”

Peary selected Henson and four Inuit as part of the team of six who would make the final run to the Pole. Before the goal was reached, Peary could no longer continue on foot and rode in a dog sled. Various accounts say he was ill, exhausted, or had frozen toes. He sent Henson on ahead as a scout.

In a newspaper interview, Henson later said: “I was in the lead that had overshot the mark a couple of miles. We went back then and I could see that my footprints were the first at the spot.”

On April 6, 1909, Henson proceeded to plant the American flag.

Triumphant when they returned, Peary received many accolades for his accomplishment, but was also criticized in that era for not taking along a whyte man. And while Peary was lauded by many for his achievement, he and his team faced wide skepticism, with Peary having to testify before Congress about allegedly reaching the North Pole due to a lack of verifiable proof. The truth about Peary’s and Henson’s 1909 expedition still remains clouded.

Although Peary frequently praised Henson as the best man for the job, Henson’s role was largely unrecognized for years. After reaching the pole he spent most of the next 30 years working as a customs clerk in New York and occasionally lectured on his experiences.

Henson recorded his Arctic memoirs in 1912, in the book A Negro Explorer at the North Pole. In 1937, a 70-year-old Henson finally received the acknowledgements he deserved: the highly regarded Explorers Club in New York accepted him as an honorary member. Henson was the first African American to be accepted. In 1948, the Club awarded Henson its highest rank of Honorary Member, an honor reserved for no more than 20 living members at a time. In 1946, the U.S. Navy awarded him a medal. He also received a cherished gold medal from the Chicago Geographic Society. The following year, he worked with Bradley Robinson to write his biography, Dark Companion. Before his death in 1955, Henson received honorary doctoral degrees from Howard University and Morgan State University.

Henson died in New York City on March 9, 1955 and was buried in Woodlawn Cemetery. The body of his wife, Lucy, was buried there in 1968. (Henson had married twice. First to married Eva Flint in 1891. The long periods of separation during Henson’s expeditions took its toll, and Flint divorced him in 1897. Henson married Lucy Ross in 1906. They never bore any children, but like Peary, Henson had relations with Inuit women during their expeditions. In circa 1906, Henson fathered his only child, a son named Anauakaq. Henson did not play a role in his son’s upbringing, though in 1987 Anauakaq reunited with Peary descendants in the United States as documented in the book North Pole Legacy: Black, White and Eskimo.)

On May 28, 1986, the United States Postal Service issued a 22 cent postage stamp in honor of Henson and Peary; they were previously honored in 1959, but not by name.

By presidential order, in 1988, the remains of Henson and his wife were reinterred with a monument at Arlington National Cemetery, in Washington, D. C., near that for Peary and his wife. Henson has received numerous posthumous honors since then. In the late 20th century, Henson’s and Peary’s elderly sons by their Inuit “country wives” were tracked down, and their descendants invited to the United States to meet other family members, as well as to attend the 1988 ceremonies.

In 1940, a public housing project, which provided the Phoenix African-American community with affordable housing, was named after Matthew Henson. The land in which the housing project was located was recognized as a historic district by the Phoenix Historic Property Register in June 2005. Only one courtyard with the original buildings remain.

The 1998 TV movie Glory & Honor was about the Peary-Henson explorations and their lives. Henson was played by Delroy Lindo, and Henry Czerny played Robert Peary. The film won a Primetime Emmy and Lindo won a Golden Satellite Award for his performance.

2000, the National Geographic Society awarded the Hubbard Medal to Matthew A. Henson posthumously. The medal was presented to Henson’s great-niece Audrey Mebane at the newly named Matthew A. Henson Earth Conservation Center in Washington, D.C.; in addition, the NGS established a scholarship in Henson’s name.
Places in Maryland named in Henson’s honor include the following: Matthew Henson State Park in Aspen Hill, Matthew Henson Middle School in Pomonkey, and elementary schools named for him in Baltimore and Palmer Park.