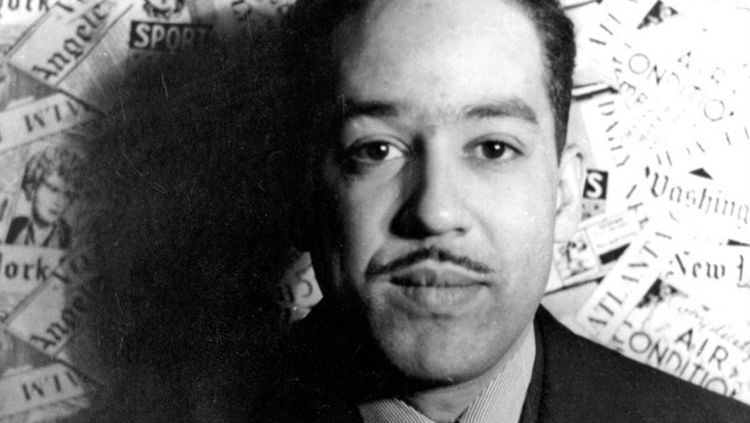 I dream a world… where wretchedness will hang its head, and joy like a pearl, attends the needs of all mankind. Of such I dream, my world!

[dropcap size=small]L[/dropcap]angston Hughes, best known as a leader of the Harlem Renaissance, is consider one of the most significant African American writers of the 20th century. Hughes wrote prolifically and published ten volumes of poetry, more than sixty short stories, a number of dramas, operas and anthologies; as well as two autobiographies. His play, Mulatto, was the first play by a Black author to be a long-run Broadway hit. Twenty years after his death, his cremated remains were interred under a floor map in the Schomburg Center for Research in Black Culture. In February 2002 the U.S. Postal Service issued a Black Heritage postage stamp in honor of Hughes.

Hughes was born James Mercer Langston Hughes on February 1, 1902, in Joplin, Missouri. His parents divorced when he was a young child, and his father moved to Mexico. He was raised by his grandmother until he was thirteen, when he moved to Lincoln, Illinois, to live with his mother and her husband, before the family eventually settled in Cleveland, Ohio.

Hughes began his literary career in high school, publishing poetry and short fiction in the school magazine. He graduated from high school in 1920 and spent the following year in Mexico with his father. Around this time, Hughes’s poem The Negro Speaks of Rivers was published in The Crisis magazine and was highly praised. In 1921 he returned to the United States and enrolled at Columbia University. He left after his freshman year due to racial tension on campus. However, during this time he quickly became a part of Harlem’s cultural movement, that became known as the Harlem Renaissance. From 1923 to 1925 he traveled abroad visiting West Africa and Europe after signing on as a steward on a freighter. He left the ship in 1924 and lived for a brief time in Paris, where he continued to develop and publish his poetry.

In November 1924, Hughes returned to the United States, and settled in Harlem, New York. It is said that one of his favorite pastimes was to sit in clubs and listen to the blues as he wrote his poetry. In 1925, his poem “The Weary Blues” won first prize in the Opportunity magazine literary competition, and Hughes also received a scholarship to attend Lincoln University, in Pennsylvania. While studying at Lincoln, Hughes poetry came to the attention of novelist and critic Carl Van Vechten, who used his connections to help get Hughes’s first book of poetry, The Weary Blues, published by Knopf in 1926. The book had popular appeal and established both his poetic style and his commitment to African American themes and heritage. Hughes was also among the first to use jazz rhythms and dialect to depict the life of urban Blacks in his work. The following year he published Fine Clothes to the Jew. By this time he had become a celebrated young talent of the Harlem Renaissance era.

After graduating from Lincoln in 1929, Hughes published his first novel, Not Without Laughter, which won the Harmon gold medal for literature.

During the 1930s, Hughes’s poetry became preoccupied with political militancy; he traveled widely in the Soviet Union, Haiti, and Japan. In 1934 he published his first collection of short stories, The Ways of White Folks, named in homage to W.E.B. Du Bois’s classic The Souls of Black Folk.

After his play Mulatto, on the twinned themes of miscegenation and parental rejection, opened on Broadway in 1935, Hughes wrote other plays, including comedies such as Little Ham (1936) and a historical drama, Emperor of Haiti (1936). Most of these plays were only moderate successes. In 1937 he spent several months in Europe, and served as a newspaper correspondent in the Spanish Civil War (1936-1939); taking a special interest in the eighty or more Black Americans fighting for the Spanish Republicans in the Lincoln Brigade.

“You tell me that Hitler is a mighty bad man
He must have took lessons from the Ku Klux Klan.”

In 1940, Hughes’s autobiography up to age 28, The Big Sea, was published. In 1942, he began writing a weekly column in the Chicago Defender that lasted twenty years. The highlight of the column was a comic Harlem character called Jesse B. Semple, better known as “Simple,” a Black Everyman that Hughes used to further explore urban, working-class Black themes, and to address racial issues. The columns were highly successful, and “Simple” would later be the focus of several of Hughes’s books and plays.

In the late 1940s, Hughes contributed the lyrics for a Broadway musical titled Street Scene. The success of the musical would earn Hughes enough money that he was finally able to buy a house in Harlem. Around this time, he also taught creative writing at Atlanta University and was a guest lecturer at a university in Chicago for several months.

Over the next two decades, Hughes would continue his prolific output. In 1949 he wrote a play that inspired the opera Troubled Island and published yet another anthology of work, The Poetry of the Negro. During the 1950s and 1960s, he published countless other works, including several books in his “Simple” series, English translations of the poetry of Federico García Lorca and Gabriela Mistral, another anthology of his own poetry, and the second installment of his autobiography, I Wonder as I Wander.

Although his peaceful politics eventually conflicted with the militancy of many of the younger Black poets, Hughes continued to play a prominent role in black thoughts throughout the 1960s. In 1960 he was awarded the Spingarn Medal from the National Association for the Advancement of Colored People (NAACP). His later works, especially Ask Your Mama: 12 Moods for Jazz (1961), The Panther and the Lash: Poems of Our Times (1967), and Black Misery (1969), address the anger of the decade without endorsing violent action. Hughes would eventually be deemed the “Poet Laureate of the [Black] Race,” a title he encouraged.