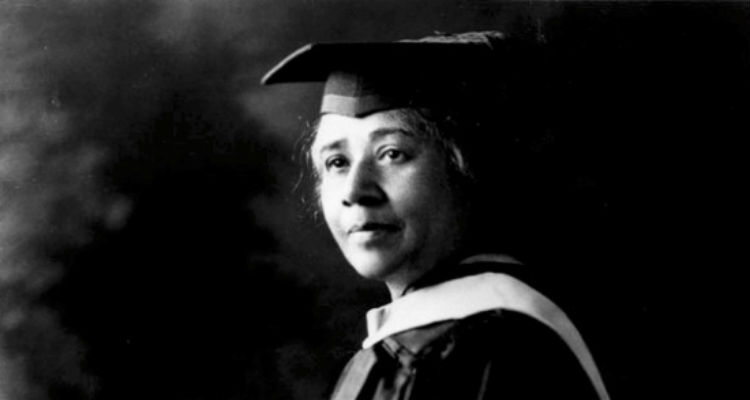 “Only the BLACK WOMAN can say when and where I enter, in the quiet, undisputed dignity of my womanhood, without violence and without suing or special patronage, then and there the whole [Black] race enters with me.” 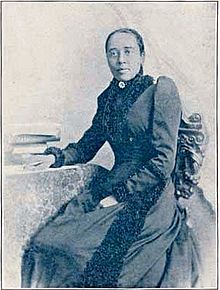 Anna Julia Haywood Cooper was a distinguished African American educator and one of the most prominent African-American scholars in United States history, who championed education for African Americans and women. Upon receiving her PhD in history from the University of Paris-Sorbonne in 1924, at age 65, Cooper became the fourth African-American woman to earn a doctoral degree. Against the backdrop of the Statue of Liberty, a quote by Cooper – “The cause of freedom is not the cause of a race or a sect, a party or a class – it is the cause of humankind, the very birthright of humanity.” – is featured on pages 24 and 25 of the United States passport. Cooper is the only woman quoted in the passport.

Anna “Annie” Julia Cooper was born into enslavement in Raleigh, North Carolina, in 1858 to her enslaved mother, Hannah Stanley and her whyte enslaver George Washington Haywood. Haywood is widely believed by historians to be the biological father of Stanley’s seven daughters. Cooper had two older brothers named Andrew J. Haywood and Rufus Haywood, and worked as a domestic servant in the Haywood home.

In 1868, when Cooper was eight years old, she received a scholarship and began her education at the newly opened Saint Augustine’s Normal School and Collegiate Institute in Raleigh, founded by the local Episcopal Diocese for the purpose of training teachers to educate former bondpeople and their families. According to Mark S. Giles, a Cooper biographer, “the educational levels offered at St. Augustine ranged from primary to high school, including trade-skill training.”

During her fourteen years at St. Augustine’s, she distinguished herself as a bright and ambitious student, who showed equal promise in both liberal arts and analytical disciplines such as math and science; her subjects included languages (Latin, French, Greek), English literature, math and science. Although the school had a special track reserved for women – dubbed the “Ladies’ Course” – and the administration actively discouraged women from pursuing higher-level courses, Cooper fought for her right to take a course reserved for men, by demonstrating her scholastic ability. In fact, Cooper excelled in her academics to the point where she was able to tutor younger students. During this period, St. Augustine’s pedagogical emphasis was on training young men for the ministry and preparing them for additional training at four-year universities. One of these men, George A. C. Cooper, would later become her husband for two years until his death.

Cooper’s work as a tutor also helped her pay for her educational expenses. After completing her studies, she remained at the institution as an instructor. After her husband’s death, Cooper entered Oberlin College, where she continued to insist on following the course of study for men. After teaching briefly at Wilberforce College, Cooper returned to St. Augustine’s in 1885. She then came back to Oberlin and earned an M.A. in Mathematics in 1887.

During her years as a teacher and principal at M Street High School in Washington, D.C., Cooper was involved in building new spaces for Black women outside of the educational sphere. She founded the Colored Women’s League of Washington in 1892, and seven years later helped open the first YWCA chapter for Black women, in response to their unwillingness to allow women of color into the organization. She also completed her first book, A Voice from the South: By A Woman from the South, published in 1892.

A Voice from the South was her only published work, although she delivered many speeches calling for civil rights and woman’s rights. The book is widely viewed as one of the first articulations of Black feminism. The book advanced a vision of self-determination through education and social uplift for African-American women. Its central thesis was that the educational, moral, and spiritual progress of Black women would improve the general standing of the entire African-American community. She says that the violent natures of men often run counter to the goals of higher education, so it is important to foster more female intellectuals because they will bring more elegance to education. This view was criticized by some as submissive to the 19th-century cult of true womanhood, but others label it as one of the most important arguments for Black feminism in the 19th century. Cooper advanced the view that it was the duty of educated and successful black women to support their underprivileged peers in achieving their goals. The essays in A Voice from the South also touched on a variety of topics, from racism and the socioeconomic realities of Black families to the administration of the Episcopal Church.

Cooper was not only an author and educator, but she was a speaker as well. Some notable speeches were delivered at the World’s Congress of Representative Women in Chicago in 1893 (in which she was one of three black women invited to speak) and the first Pan-African Conference in London in 1900 (when she delivered a paper entitled “The Negro Problem in America”).

“I speak for the colored women of the South, because it is there that the millions of blacks in this country have watered the soil with blood and tears, and it is there too that the colored woman of America has made her characteristic history and there her destiny is evolving.” –Anna Julia Cooper, World’s Congress of Representative Women, 1893 Chicago World Fair

She founded the Colored Women’s League of Washington in 1892, and seven years later helped open the first YWCA chapter for black women, in response to their unwillingness to allow women of color into the organization.

In 1914, at the age of 56, Cooper began courses for her doctoral degree at Columbia University, but was forced to interrupt her studies in 1915 when she adopted the five children of her late half-brother upon their mother’s death. Later on she was able to transfer her credits to the University of Paris-Sorbonne, which however did not accept her Columbia thesis, an edition of Le Pèlerinage de Charlemagne. Over the course of a decade she was able to research and compose her dissertation, completing her coursework in 1924. Cooper defended her thesis The Attitude of France on the Question of Slavery Between 1789 and 1848 in 1925. At the age of sixty-five, Cooper became the fourth black woman in American history to earn a Doctorate of Philosophy degree.

Although the alumni magazine of her undergraduate alma mater, Oberlin College, praised her in 1924, saying, “The class of ’84 is honored in the achievement of this scholarly and colored alumna”, when she tried to present her edition of Le Pèlerinage de Charlemagne to the college the next year, it was rejected.

On February 27, 1964, Cooper died in Washington, D.C., at the age of 105. Her memorial was held in a chapel on the campus of Saint Augustine’s College, where her academic career began. She was buried alongside her husband at the City Cemetery in Raleigh.

Cooper is honored with Elizabeth Evelyn Wright with a feast day on the liturgical calendar of the Episcopal Church (USA) on February 28.

The Anna Julia Cooper Center on Gender, Race, and Politics in the South at Wake Forest University was established in Anna Cooper’s honor. Melissa Harris-Perry is the founding director.