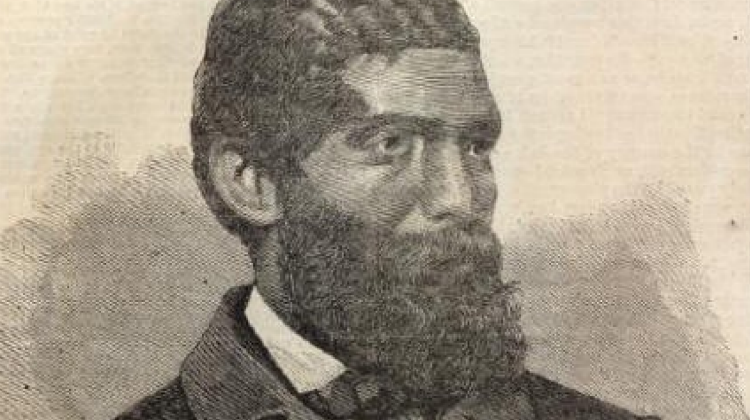 John Stewart Rock was the first Black person to be admitted to the bar of the Supreme Court of the United State. Rock was an eloquent African American activist and master of several professions. He was a teacher, doctor, dentist, lawyer and abolitionist. Rock is historically associated with the coining of the term “Black is beautiful” (thought to have originated from a speech he made in 1858, however historical records now indicate he never actually used the specific phrase on that day). Rock was one of the first African-American men to earn a medical degree.

John Stewart Rock was born to John and Maria (Willett) Rock, free African-American parents, on October 13, 1825 in Salem, New Jersey. His parents encouraged him in his studies and, despite having little in terms of financial resources, provided for him to follow through with formal schooling. By the age of 19, Rock had received the necessary amount of education to take up a position as a teacher. He started out in 1844 in a one-room school in Salem, where he would continue to work for the next four years, garnering the attention and approval of veteran schoolteachers. Rock had an impressive work ethic, consistently holding class for six hours, conducting private tutoring sessions for two hours, and studying medicine under two whyte physicians, Dr. Shaw and Dr. Gibson, who [allowed him to study their textbooks and use their personal book collections for eight hours daily]. In 1848, Rock applied to medical school, but his application was rejected because of racism.

Rock then decided to transfer into the field of dentistry and, after an 1849 apprenticeship with Dr. Harbert, a whyte dentist, opened a dental practice in Philadelphia in January 1850. Just one year later, he was rewarded with a silver medal for his expert work on a set of silver dentures that he crafted and later displayed. After finally gaining admittance to medical school, Rock graduated from American Medical College in Philadelphia in 1852, becoming one of the first African Americans to attain a degree in medicine. At the age of 27, he had established himself as a talented and well-respected teacher, dentist, and physician.

In 1853, following his marriage to Catherine Bowers, he and his wife moved to Boston where he set up his own practice in dentistry and medicine. Many of his patients turned out to be ill fugitive enslaved African Americans making their way through Boston on the Underground Railroad, fleeing towards Canada. He also provided care to members of an integrated abolitionist organization called the Boston Vigilance Committee, which aimed to aid and protect fugitives targeted by the Fugitive Slave Law of 1850. Rock was the second Black to gain acceptance to the Massachusetts Medical Society, sometime after the induction of Dr. John De Grasse in 1854.

A gifted orator, he lectured on behalf of the abolitionist cause, voting rights for free African Americans, and the newly formed Republican Party. After poor health forced him to give up his medical practice in 1859 (by 1861, he had also given up dentistry), the undaunted Rock pursued a career in law.
In 1861, he was one of the first African Americans admitted to the Massachusetts Bar; in September of that year, he was appointed a Justice of the Peace for Boston and Suffolk County, Massachusetts. By then the country was at war, and throughout the conflict Rock was a tireless advocate for abolition of the Maafa (slavery).

Abby was unique, gorgeous, fabulous voice and a One of a Kind. Too bad jazz has become a lost music platform. Hip Hop has taken over most of the music genre. Unless it is re-introduced in High Schools and colleges and more TV exposure, poof, Gone forever. What we have today is commercialism Jazz with a twist of Hip Hop and R&B.