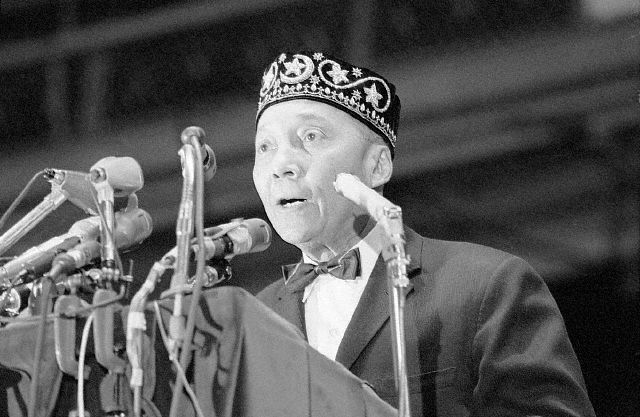 The Honorable Elijah Muhammad was the leader of the black separatist religious movement known as the Nation of Islam (sometimes called Black Muslims) in the United States. 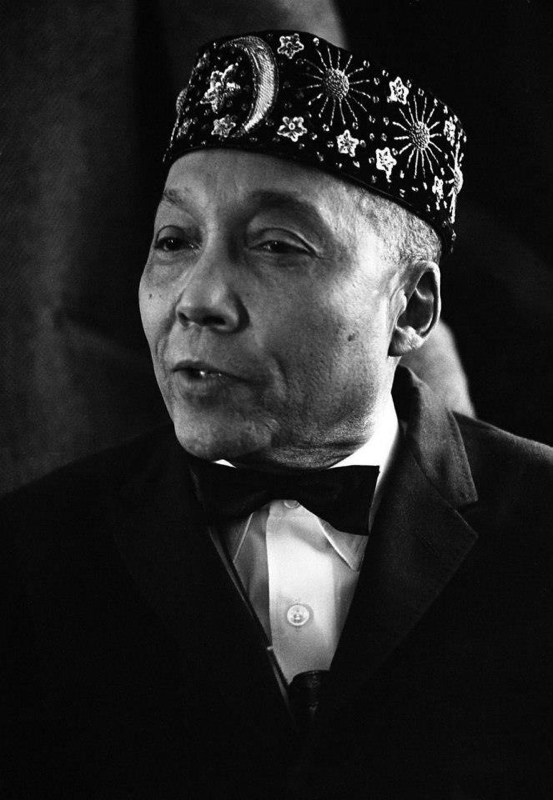 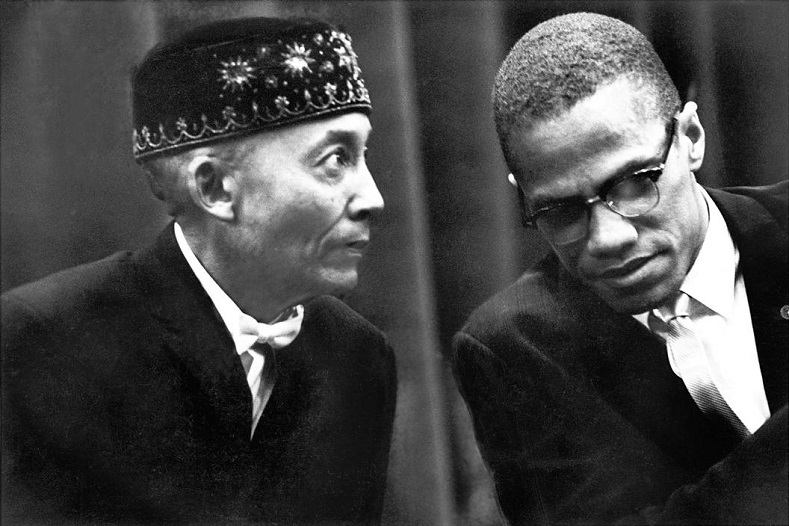 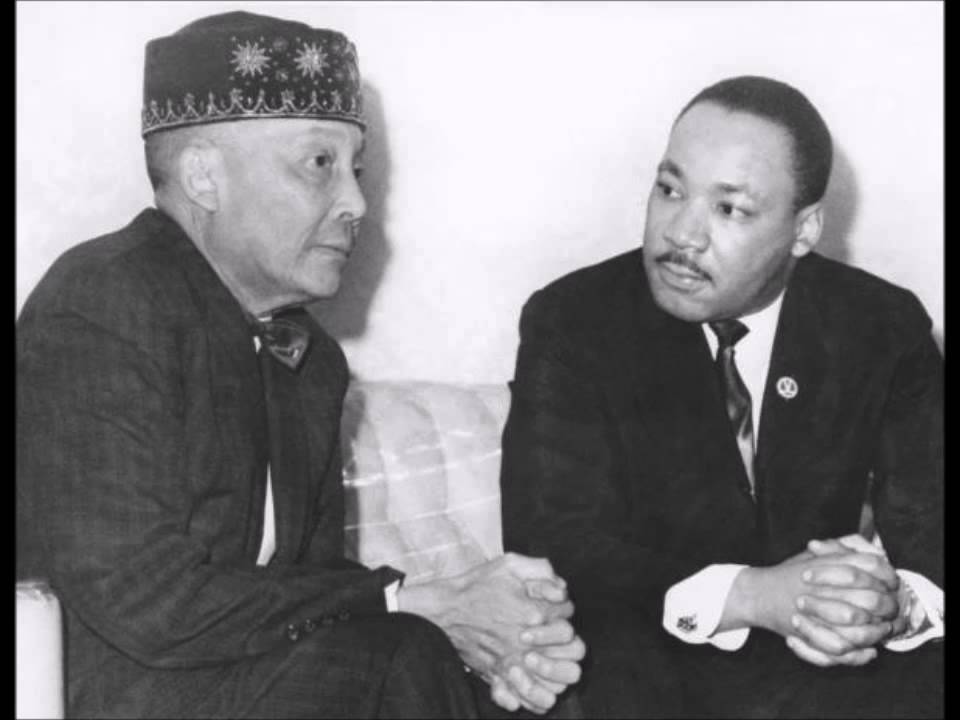 Muhammad was a fearless critic of whyte America at a time when blacks who questioned the status quo had much to fear. Known as the Messenger of Allah to the Lost-Found Nation of Islam in North America, his Temple of Islam mixed black nationalism with a program of economic self-improvement and the dietary and prayer laws of traditional Islam. Muhammad and his movement pioneered an interest in black history, emphasized black pride, and practiced black entrepreneurship and self-reliance.

Elijah Muhammad was born Elijah Poole on October 7, 1897, in rural Sandersville, Georgia. His parents, Wali and Marie Poole, were former enslaved persons who worked as sharecroppers. His father was a Baptist preacher. Young Elijah went to school through the fourth grade and learned the rudiments of reading, writing, and arithmetic before economic conditions forced him to join the rest of his family working in the fields.

In April 1923, Elijah Poole moved his young family from Macon, Georgia, where he worked for the Southern Railroad Company and the Cherokee Brick Company to Detroit, Mich. Black families, like the Pooles, were leaving the south, at that time, in search of better economic and social circumstances. Detroit was a bustling upwardly mobile city with its burgeoning auto industry.

The stock market crash in 1929 was the gateway to economic misery that sparked the fuel of the “Great Depression” of the 1930s. Moreover, America’s racial situation continued its downward spiral. Lynchings, race riots and other forms of terrorism against Blacks continued unabated. But Detroit, with its huge population of 1.5 million people including 250,000 thousand Blacks, was beginning to see changes in its social scene.

On July 4, 1930, Master W. Fard Muhammad arrived in Detroit, Michigan. He announced and preached that God is One, and it is now time for Blacks to return to the religion of their ancestors, Islam. News spread all over the city of Detroit of the preachings of Master Fard Muhammad. Elijah Poole’s wife first learned of the Temple of Islam and wanted to attend to see what the commotion was all about, but instead, her husband advised her that he would go and see for himself.

Hence, in 1931, after hearing his first lecture at the Temple of Islam, Elijah Poole was overwhelmed by the message and immediately accepted it. Soon thereafter, Elijah Poole invited and convinced his entire family to accept the religion of Islam.

The Founder of the Nation of Islam gave him the name “Karriem” and made him a minister. Later he was promoted to the position of “Supreme Minister” and his name was changed to Muhammad. “The name ‘Poole’ was never my name,” he would later write, “nor was it my father’s name. It was the name the white slave-master of my grandfather after the so-called freedom of my fathers.”

Mr. Muhammad quickly became an integral part of the Temple of Islam. For the next three and one-half years, Mr. Muhammad was personally taught by his Teacher non-stop. The Muslim community, in addition to establishing religious centers of worship, began to start businesses under the aegis of economic development that focuses on buying and selling between and among Black companies. Mr. Muhammad establishes a newspaper, “The Final Call to Islam,” in 1934. This would be the first of many publications he would produce.

Meanwhile, Mr. Muhammad helped establish schools for the proper education of his children and the community. Indeed, the Muslim parents felt that the educational system of the State of Michigan was wholely inadequate for their children, and they established their own schools. By 1934, the Michigan State Board of Education disagreed with the Muslim’s right to pursue their own educational agenda, and the Muslim Teachers and Temple Secretary were jailed on the false charge of contributing to the delinquency of minors. Mr Muhammad said he committed himself to jail after learning what had happened.

Ultimately, the charges were later dropped, and the officials were freed and Mr. Muhammad received six months’ probation to take the Muslim children out of the Islamic school and put them under white Christian teachers. “This I did not do,” he said. He moved to the city of Chicago in September of that same year. His Teacher, Master W. Fard Muhammad, was also harassed by the police and was forced out of Detroit and moved to Chicago where he continued to face imprisonment and harassment by the police. In 1934 Master W. Fard Muhammad departed the scene and left the Honorable Elijah Muhammad with the mission of resurrecting the Black man and woman.

By 1935, Mr. Muhammad faced many new challenges. His teacher had instructed him to go to Washington, D.C. to visit the Library of Congress in order to research 104 books on the religion of Islam, among other subjects. Also, after assuming the leadership of the Temple of Islam by the order of the Founder of the Nation of Islam, Mr. Muhammad faced a death plot at the hands of a few disgruntled members. Mr. Muhammad avoided their plan and went to Washington, D.C. to study and build a mosque there. He was known under many names, “Mr. Evans,” his wife’s maiden name, “Ghulam Bogans,” “Muhammad Rassoull,” “Elijah Karriem” and “Muhammad of ‘U’ Street.”

Consequently, Mr. Muhammad, while in Washington, D.C. was arrested on May 8, 1942, for allegedly evading the draft. “When the call was made for all males between 18 and 44, I refused (NOT EVADED) on the grounds that, first, I was a Muslim and would not take part in war and especially not on the side with the infidels,” he wrote in “Message To The Blackman.” “Second, I was 45 years of age and was NOT, according to the law, required to register.”

The Nation of Islam became known for fostering black pride and self-sufficiency among its predominantly young, male, lower-class members. Muhammad promoted an effective program of good health, self-improvement, and moral guidelines for members of the movement to follow.
Alcohol, tobacco, and the “slave diet” of pork and corn-bread were prohibited; one meal of fresh food was encouraged; male members were required to recruit new followers to the faith; and a strict code of marital fidelity was enforced. Muhammad also encouraged members to improve themselves economically and provided schooling and training in business enterprises to assist them in attaining the goal of financial independence. “Put your brains to thinking for self;” The Black Muslims in America quoted him as saying, “your feet to walking in the direction of self; your hands to working for self and your children…. Stop begging for what others have and help yourself to some of this good earth…. We must go for ourselves…. This calls for the unity of us all to accomplish it!”

Small, thin, and suffering from asthma and bronchitis, Muhammad was nevertheless able to keep the movement going. His column in the Pittsburgh Courier was widely read and commented on in the black community. In the late 1940s, Malcolm Little joined the movement while serving in a Massachusetts prison. Renamed Malcolm X, he became Muhammad’s chief disciple and bore Muhammad’s message across the country. According to Newsweek, Malcolm “put the little kingdom of Allah on the map.”

By 1960 the Nation of Islam had 69 temples or missions in 27 states. Tiny compared to conventional churches, its growth nevertheless became a worry to both conservatives and liberals. The conservative newsweekly U.S. News & World Report played on racial fears with a 1959 article called “Black Supremacy Cult in U.S.—How Much Of A Threat?” Among liberals, NAACP Chief Council Thurgood Marshall, probably smarting from Nation of Islam criticism, told the New York Times that the movement was “run by a bunch of thugs organized from prisons and jails and financed, I am sure by [Egyptian nationalist leader Gamal Abdel] Nasser or some Arab group.”

But while many criticized the Nation of Islam’s rhetoric, its positive effects could not be overlooked. Even Newsweek admitted that behind the discourse on “White devils,” there was an inspirational message. “The real heart of Muhammad’s message was the worth, the competence and the solidarity of Black people. He urged them to express it through a meld of puritan morals (no cigarettes, liquor, drugs or non-marital sex) and Protestant work ethics.”

The movement spread throughout America and as far away as England and the Caribbean and soon featured not only Temples of Islam, but a newspaper called Muhammad Speaks, farmland, 46 Universities of Islam, apartment houses for over 800 people, the Guaranty Bank and Trust Company, an aviation department, a 3 million tons a month import fish program, grocery stores, restaurants, Capital Cleaners and a trucking food distribution system—all owned by the movement.

Despite or maybe because of the movement’s tremendous growth, some say a rift had developed between Muhammad and Malcolm X. In November of 1963, Malcolm told a Black Muslim rally at Manhattan Center that the assassination of President Kennedy was an instance of “the chickens coming home to roost.” While Malcolm’s statement was not against the Nation of Islam dogma, it was not the kind of utterance Muhammad wanted him to make in public. As punishment Malcolm was silenced for 90 days.

Malcolm accepted the punishment, but on March 8, 1964, he broke with Muhammad, telling the press that he was leaving the Muslims to organize his own party.

After Malcolm X was assassinated in February of 1965, Muhammad kept close to his Chicago mansion, giving few interviews and rarely appearing in public. Mostly he worked in the Nation of Islam offices, planning recruitment strategies and tending to the movement’s growing network of businesses, farmlands, and restaurants.

On January 30, 1975, Elijah entered Mercy Hospital in Chicago suffering from heart trouble, bronchitis, asthma, and diabetes. He died on February 25th. In a 1989 article for The Final Call titled “Allah’s Promise,” Nation of Islam minister Louis Farrakhan eulogized Muhammad and called on black men and women to see the value of his words: “This modern era of Black consciousness was inaugurated by Muslims…. We became Muslims because Master Fard Muhammad came and raised up the Honorable Elijah Muhammad and gave him a methodology that enabled him to reach a spiritually and mentally dead people and raise us to spiritual and mental life.”