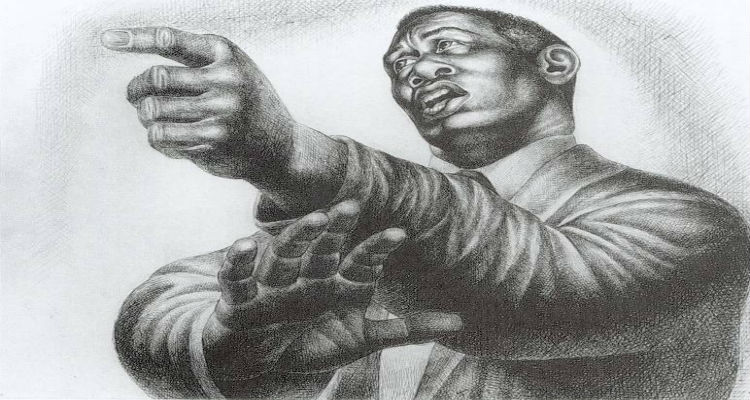 [dropcap size=small]G[/dropcap]ullah Jack, also known as Couter Jack and sometimes referred to as “Gullah” Jack Pritchard, was an African conjurer, who is historically known for aiding Denmark Vesey in planning a large Maaf/Atlantic slavery uprising that would become known as Denmark Vesey Conspiracy of 1822.

Gullah Jack was African born and purchased as a prisoner of war at Zanguebar (later Zanzibar) on Africa’s eastern shores by Zephaniah Kinsley in the early nineteenth century. Gullah Jack was allowed to take a bag aboard the ship which he always kept with him. Approximately forty people escaped or were taken prisoners in the 1812 Seminole raid on the Kinsley plantation where Gullah Jack was enslaved. He was among the group that eventually ended up in Charleston, South Carolina. In 1821, Paul Pritchard purchased him there.

A short man with bushy side whiskers who acted ‘artful’ for Europeans, Gullah Jack had perfected the ‘shuck-and-jive’ persona. He was a member of the AME church that Denmark Vesey attended. Just after Christmas 1821, Vesey recruited Gullah Jack to be one of his lieutenants. Know as a conjurer and among Blacks as “the little man who can’t be killed,” he had a reputation as a powerful root doctor who was skilled in the uses of herbs for medicine or poison. He was also able to create powerful protective amulets against evil. Gullah Jack also represented an Angolan company called the “Gullah Company” or the “Gullah Society.”

Gullah Jack was instrumental in spreading the message of Denmark’s plan to seize the city of Charleston, kill most of the Europeans, and, if necessary, escape to the Caribbean, supposedly, to Haiti. He recruited African-born men as soldiers for the revolution and gave the recruits African religious symbols to guarantee victory against the “buckra” (Europeans). He instructed his faithful to only eat parched corn and ground nuts on the day of the attack and gave them crab claws to hold in their mouths as they attacked, to keep them from being wounded. He is also said to have used his spiritual powers to terrify others into keeping silent about the conspiracy. Historians believe Gullah Jack’s strong African culture, contrasted against Vesey’s preaching, helped attract many of the enslaved that joined the revolt.

The plan was betrayed and Gullah Jack was captured on July 5, 1822. At his trial Gullah Jack played the fool so much that some of the judges could not believe he was part of the rebellion. However, as the trial progressed and six witnessed testified against him, Jack’s demeanor changed. He scowled and gave his accusers hard looks. He made motions and designs with his fingers until the judges admonished him for trying to bewitch the witnesses. Testimony from his trial mention that he requested an extension on his life for one or two weeks. However, he was condemned to death and hung on July 12, 1822.

He is still remembered and admired in the Gullah/Geechee nation.

Source:
https://en.wikipedia.org/wiki/Gullah_Jack
Wicked Charleston: The Dark Side of the Holy City by Mark R. Jones
Slavery in the United States…by Junius P. Rodriguez