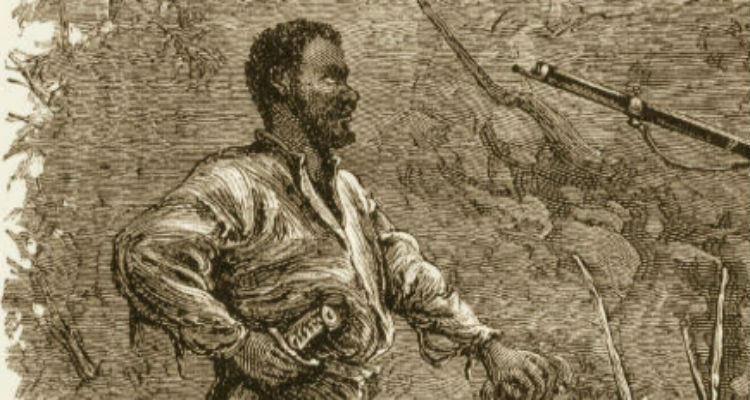 Nathanial “Nat” Turner was the leader of a powerful Maafa (slavery) revolt in Southampton County, Virginia, in 1831. Nat Turner’s Rebellion was one of the most effective, sustained rebellions in U.S. history. Spreading terror throughout the whyte South, Turner’s action set off a new wave of oppressive legislation prohibiting the education, movement, and gathering of enslaved African-Americans and stiffened pro-slavery, anti-abolitionist convictions that persisted in that region until the American Civil War (1861–65).

Nat Turner was born into the Maafa on October 2, 1800, on the Virginia plantation of Benjamin Turner, who allowed him to be instructed in reading, writing, and religion. While still a young child, Turner was overheard describing events that had happened before he was born. This, along with his keen intelligence, and other signs marked him in the eyes of his people as a prophet “intended for some great purpose.” A deeply religious man, he “studiously avoided mixing in society, and wrapped himself in mystery, devoting his time to fasting and praying.”

Sold three times in his childhood and hired out to John Travis (1820s), he became an inspirational preacher and leader of enslaved African-American on Benjamin Turner’s plantation and in his Southampton County neighbourhood, believing that he was chosen by the creator to lead them from bondage. In 1831, shortly after he had been sold again, a sign in the form of an eclipse of the Sun caused Turner to believe that the hour to strike was near. His plan was to capture the armoury at the county seat, Jerusalem, and, having gathered many recruits, to press on to the Dismal Swamp, 30 miles (48 km) to the east, where capture would be difficult. On the night of August 21, together with seven other fighters in whom he had put his trust, he launched the rebellion, killing his enslaver and his family and then setting forth toward Jerusalem. In two days and nights about 60 whyte people were killed.

The state militia — a total force of 3,000 men – brutally crushed the rebellion and the insurgents were dispersed and either killed or captured. Many innocent African Americans were massacred in the hysteria that followed. Turner eluded his pursuers for six weeks but was eventually captured, tried, and hanged on November 11, 1831.

Nat Turner’s uprising put an end to the whyte Southern myth that enslaved people were either contented with their lot or too servile to mount an armed revolt. In Southampton county Black people came to measure time from “Nat’s Fray,” or “Old Nat’s War.” For many years in Black churches throughout the country, the name Jerusalem referred not only to the Bible but also covertly to the place where the divinely-crowned leader had met his death.