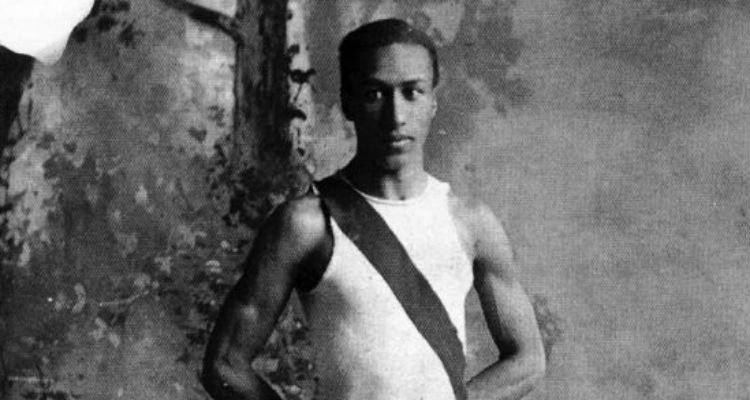 George Coleman Poage was the first African-American athlete to represent the United States in the Olympic Games, winning two bronze medals at the 1904 games in St. Louis.

Poage was born in Hannibal, Missouri on November 6, 1880, but spent most of his childhood growing up in La Crosse, Wisconsin. As a teen, he excelled both in academics and athletics. Poage attended La Crosse High School, where he ranked second in his class. He was considered the top athlete at the school and, in 1899, was the class salutatorian, becoming the school’s first African-American graduate. Poage received his high school diploma in 1899 and decided to continue his education at the University of Wisconsin.

Poage graduated in 1903 with a degree in History. His senior thesis was titled “An Investigation into the Economic Condition of the Negro in the State of Georgia During the Period of 1860-1900.” He returned to the University for the 1903-04 school year to take graduate classes in History, supported by the UW athletic department, which hired him as an athletic trainer for the football team. In June 1904, he became the first African-American individual Big Ten track champion in conference history, placing first in both the 440-yard dash and the 220-yard hurdle.

The Milwaukee Athletic Club sponsored Poage to compete in the 1904 Summer Olympics in St. Louis, Missouri. Many prominent African-American leaders had called for a boycott of the games to protest racial segregation of the events in St. Louis. An integrated audience was not allowed at either the Olympics or the World’s Fair as the organizers had built segregated facilities for the spectators. Poage chose to compete in four events and became the first African-American to medal in the Games by winning the bronze in both the 200-yard and 400-yard hurdles.

Poage remained in St. Louis after the Olympics, working as a school principal for a year before becoming a teacher at segregated Charles Sumner High School. At Sumner, he was the head of the English department, teaching English composition, literature, and Latin, helped coach the school’s sports teams, and supervised various extracurricular activities such as debate and theater. In 1914, Poage left his job at Sumner. According to a former student, he purchased to a farm in Minnesota, although no land records of the purchase have been found. Local historian Margaret Lichter and Bruce Mouser have speculated that the land was owned by the Easton family.

In 1920, Poage moved to Chicago. He worked in a restaurant for four years. In 1924, Poage was hired by the United States Postal Service and worked as a postal clerk for nearly thirty years. After his retirement in the 1950s he remained in Chicago until his death in 1962.

Poage was elected to the Wisconsin Athletic Hall of Fame in 1998. In 2013, the La Crosse City Council renamed Hood Park to George C. Poage Park in Poage’s honor.