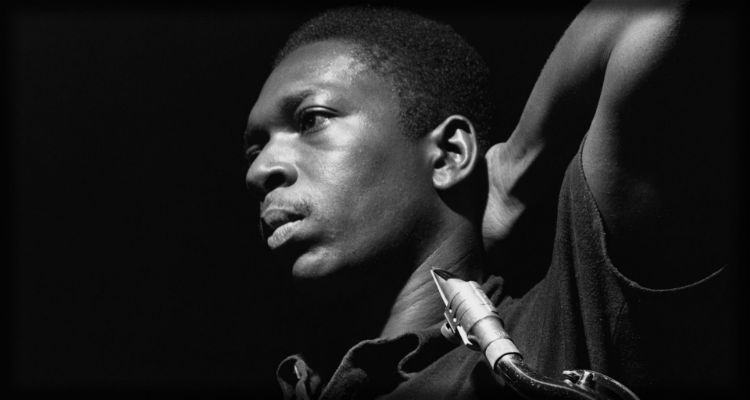 “My music is the spiritual expression of what I am — my faith, my knowledge, my being…When you begin to see the possibilities of music, you desire to do something really good for people, to help humanity free itself from its hangups…I want to speak to their souls.”

John Coltrane was an African American jazz saxophonist and composer. Coltrane has influenced innumerable musicians and remains one of the most significant saxophonists in music history. He received many posthumous awards and recognitions, including canonization by the African Orthodox Church as Saint John William Coltrane and a special Pulitzer Prize in 2007. His second wife was pianist Alice Coltrane and their son Ravi Coltrane is also a saxophonist.

John Coltrane was born on September 23, 1926, in Hamlet, North Carolina. He grew up surrounded by music. His father played several instruments sparking Coltrane’s study of E-flat horn and clarinet. Coltrane’s first exposure to jazz came through the records of Count Basie and Lester Young. By the age of 13, Coltrane had picked up the saxophone, and almost from the moment he first started playing, it was apparent he had a talent for it. While in high school, Coltrane’s musical influences shifted, and he switched to alto saxophone. He continued his musical training in Philadelphia at Granoff Studios and the Ornstein School of Music. He was called to military service during WWII, where he performed in the U.S. Navy Band in Hawaii.

After the war, Coltrane began playing tenor saxophone with the Eddie “CleanHead” Vinson Band and was later quoted as saying, “A wider area of listening opened up for me. There were many things that people like Hawk, and Ben and Tab Smith were doing in the ‘40’s that I didn’t understand, but that I felt emotional.” Prior to joining the Dizzy Gillespie band, Coltrane performed with Jimmy Heath where his passion for experimentation began to take shape. However, it was his work with the Miles Davis Quintet in 1958 that would lead to his own musical evolution. “Miles music gave me plenty of freedom,” he once said. During that period, he became known for using the three-on-one chord approach, and what has been called the ‘sheets of sound,’ a method of playing multiple notes at one time.

By 1960 Coltrane had formed his own quartet which included pianist McCoy Tyner, drummer Elvin Jones, and bassist Jimmy Garrison. Eventually adding players like Eric Dolphy, and Pharoah Sanders. The John Coltrane Quartet created some of the most innovative and expressive music in Jazz history including the hit albums: My Favorite Things, Africa Brass, Impressions, Giant Steps, and his monumental work A Love Supreme. As his career progressed, Coltrane and his music took on an increasingly spiritual dimension. He felt that everyone should make a conscious effort to effect positive change in the world and that his music was an instrument to create positive thought patterns in the minds of people.

In 1967, Coltrane died from liver cancer at Huntington Hospital on Long Island on July 17, at the age of 40. His funeral was held four days later at St. Peter’s Lutheran Church in New York City. The service was opened by the Albert Ayler Quartet and closed by the Ornette Coleman Quartet. Coltrane is buried at Pinelawn Cemetery in Farmingdale, New York.

However, decades after his death Coltrane’s music can be heard in motion pictures, on television and radio. Recent film projects that have made references to Coltrane’s artistry in dialogue or musical compositions include, “Mr. Holland’s Opus”, “The General’s Daughter”, “Malcolm X”, “Mo Better Blues”, “Jerry McGuire”, “White Night”, “The Last Graduation”, “Come Unto Thee”, “Eyes On The Prize II” and “Four Little Girls”. Also, popular television series such as “NYPD Blue”, “The Cosby Show”, “Day’s Of Our Lives”, “Crime Stories” and “ER”, have also relied on the beautiful melodies of this distinguished saxophonist.

In 1972, A Love Supreme was certified gold by the RIAA for exceeding 500,000 units in Japan. This jazz classic and the classic album “My Favorite Things” were certified gold in the United States in 2001.

In 1982, the RIAA posthumously awarded John Coltrane a Grammy Award of Best Jazz Solo Performance for the work on his album, Bye Bye Blackbird. In 1997 he received the organization’s highest honor, the Lifetime Achievement Award.

In 1995, John Coltrane was honored by the United States Postal Service with a commemorative postage stamp. Issued as part of the musicians and composers series, this collector’s item remains in circulation.

In 2001, The NEA and the RIAA released 360 songs of the Century. Among them was John Coltrane’s My Favorite Things.

In 2007, the Pulitzer Prize Board awarded a posthumous Special Citation to legendary jazz composer John Coltrane for his lifetime of innovative and influential work. The citation lauds Coltrane for “his masterful improvisation, supreme musicianship and iconic centrality to the history of jazz.” The committee said of Coltrane: “His exalted stature arises from his composition and recordings. In ‘A Love Supreme,’ he produced an imposing composition expressing faith. In ‘Africa/Brass Selections,’ he achieved astonishing orchestral feats. His work has weight, an artistic quest, and searching nature. Coltrane infused the existing tradition with innovation and radical approaches. The surface of his music is dynamic and palpable, the underlying structure is suffused with spirituality and provocative political content.”