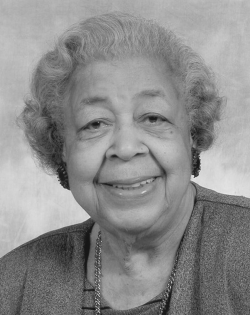 Mary Elizabeth Carnegie was a ground-breaking nurse and educator who championed the cause of African American nurses. She was the first Black nurse to serve as a voting member on the board of a state nursing association. Her extraordinary accomplishments in advancing educational and professional opportunities for African American nurses over a career that spanned more than 50 years earned her countless honors, including the American Nurses Association’s Mary Mahoney Award, the American Academy of Nursing’s Living Legend Award (the highest honor the profession offers), and induction into the ANA’s Nursing Hall of Fame.

Dr. Carnegie was born Mary Elizabeth Lancaster in Baltimore, Maryland on April 19, 1916, but grew up in Washington. She graduated from Dunbar High School in 1932, and entered the Lincoln nursing school in New York at 16, graduating four years later. She also received a bachelor’s degree from West Virginia State College, a master’s degree from Syracuse University and a doctorate in public administration from New York University in 1972.

After receiving her bachelor’s degree, Carnegie took a job in a hospital in Richmond, Virginia, before becoming a clinical instructor at St. Philip Hospital School of Nursing. While working at St. Philip, Carnegie was exposed to a different social system in the nursing world in the south, which made her resolute in increasing African Americans’ access to professional nursing education. In 1943 she established the baccalaureate nursing program at historically Black Hampton University in Virginia.

Carnegie joined the Florida Association of Colored Graduate Nurses (FACGN) in 1945. She was elected president of the organization three years later. Traditionally, the FACGN was named a courtesy (non-voting) board member of the Florida State Nurses Association the next year. After Carnegie’s service with the FACGN, the FSNA board decided to grant her full rights and responsibilities on their board. She was the first Black nurse to serve on the board of a state nursing association. Between 1945 and 1953, Carnegie was a professor and dean of the nursing school at Florida A&M University.

Carnegie spent 25 years, from 1953 to 1978, on the editorial staff of the American Journal of Nursing and was editor emeritus of Nursing Research until her death. She has written, edited and contributed chapters to nearly 20 books and is the author of three editions of the award-winning The Path We Tread: Blacks in Nursing Worldwide, 1854-1984 (1986).

She was a past president of the American Academy of Nursing and chairwoman of the ANA’s Minority Fellowship Program Advisory Committee. She initiated the baccalaureate nursing program at the historically black Hampton University in Virginia, where the archives are named in her honor. Also, name in her honor was an endowed chair in nursing that focuses on health disparities at Howard University.

During her long nursing career, Carnegie challenged racism in its many forms. She exhibited courage, integrity, and commitment in obtaining quality education and full recognition for the contributions of African American nurses. At a time when Black nurses at some hospitals were not allowed to identify themselves as “Miss,” only “Nurse,” Carnegie insisted on the proper honorific and refused to ride in hotel freight elevators while attending state nursing meetings in Florida. She also served as a mentor to generations of African American nurse leaders. In any open discussion of history presentations, she unfailingly alerted the audience to what African American nurses were doing in the area under discussion.

Carnegie received eight honorary doctorates and countless awards, including the George Arens Pioneer Medal from her alma mater, Syracuse University, the President’s Award from Sigma Theta Tau International, and the Living Legend Award from the Association of Black Nurse Faculty in Higher Education. She was inducted into the Virginia Nursing Hall of Fame in 2009.

After developing hypertensive cardiovascular disease, Carnegie died in 2008 in Chevy Chase, Maryland. Carnegie had been married once; her husband of 10 years, Eric Carnegie, died in 1954.