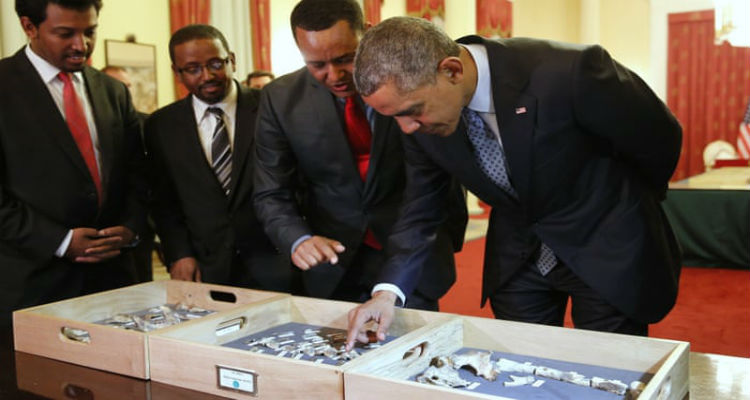 “There is still a powerful tendency to deny that humanity originated in Africa and that the African peoples of the world are related to each other, or even that Black people are indigenous to Africa.” However, the evidence shows that for the first one hundred thousand years (and perhaps longer) African people were the ONLY people on planet earth. No Yurugu (European) existed. They were not yet created. Yurugu DID NOT invent and create culture, nor civilization.” ~from, The African Background to Medical Science by Charles Finch

Dinknesh (AL 288-1) was discovered on November 24, 1974 by paleoanthropologist Donald Johanson at Hadar in the Awash Valley of the Afar Triangle in Ethiopia, showing that Africa is the birthplace of humanity. Dinknesh’s European name is “Lucy”. 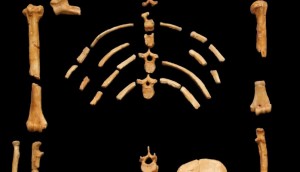 According to the Institute of Human Origins, “Johanson was with Tom Gray at the site of Hadar in Ethiopia. They had taken a Land Rover out that day to map in another locality. After a long, hot morning of mapping and surveying for fossils, they decided to head back to the vehicle. Johanson suggested taking an alternate route back to the Land Rover, through a nearby gully. Within moments, he spotted a right proximal ulna (forearm bone) and quickly identified it as a hominid. Shortly thereafter, he saw an occipital (skull) bone, then a femur, some ribs, a pelvis, and the lower jaw. Two weeks later, after many hours of excavation, screening, and sorting, several hundred fragments of bone had been recovered, representing 40 percent of a single hominid skeleton.

Later in the night of November 24, there was much celebration and excitement over the discovery of what looked like a fairly complete hominid skeleton. There was drinking, dancing, and singing; the Beatles’ song “Lucy in the Sky With Diamonds” was playing over and over. At some point during that night, no one remembers when or by whom, the skeleton was given the name “Lucy.” The name has stuck.”

After public announcement of the discovery, Dinknesh captured much public interest, becoming a household name, as Lucy, at the time. The story of her discovery and reconstruction was published in a book by Johanson.

Dinknesh (meaning ‘you are marvelous’ or ‘the wondrous one’) had not finished evolving into a human, as we know today. That took another 2 million, 800 hundred thousand (or so) years. Her 3.5 million years old fossil belonged to a species called Australopithecus Afarensis. She is by far the most famous and best-preserved fossil of that specific species. Dinknesh was less than four feet tall and weighted sixty pounds (she was 1.1 m (3 ft 7 in) tall and weighed 29 kg (64 lb)). She possessed a relatively small brain and had skull features resembling that of an ape. However,a number of factors point to Dinknesh being fully grown. For one thing, her wisdom teeth, which were very humanlike, were exposed and appear to have been in use for a while before her death. Although Dinknesh had a small brain, her pelvis and leg bones were almost identical in function to those of modern humans, showing with certainty that these hominids had walked erect.

Her ‘baby’ have been unearthed in Ethiopia’s Dikika region; the fossilised remains of an Australopithecus afarensis child thought to have died aged three. “Dinknesh’s baby” skeleton, is about a hundred thousand years older than herself.

Beginning in 2007, the fossil and associated Ethiopian artifacts toured the United States for six years, as an exhibition entitled Lucy’s Legacy: The Hidden Treasures of Ethiopia. Part of the proceeds of admission fees were to go to the Ethiopian government for improvements to its museums. Dinknesh and the exhibit were returned to the National Museum of Ethiopia in Addis Ababa, Ethiopia on 7 May 2013.