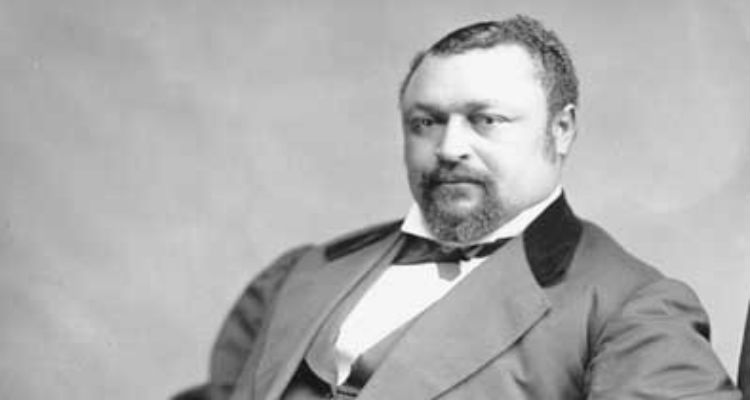 Blanche K. Bruce was born on March 1, 1841 in Farmville, Virginia. His mother, Polly, was enslaved. His father was most likely Pettus Perkinson, who was Polly’s enslaver and the son-in-law of her deceased previous enslaver, Lemuel Bruce. Bruce had ten siblings. He was well educated as a youth having had a private tutor, but this did not exempt him from  injustices. Growing up, he was forced to work as servant to his half-brother William Perkinson.

A few years after the Civil War started, Bruce ran away to Lawrence, Kansas and tried unsuccessfully to sign up with the Union Army. He moved back to Missouri in 1864, near the end of the Civil War. Living as a free man and inspired by his own passion for learning, Bruce started a school for African-American children in Hannibal. According to some accounts, in 1866 Bruce attended Oberlin College in Ohio and stayed on for two years, although Oberlin has failed to produce any records to support this theory. In 1868 he relocated to Mississippi and became a cotton farmer. Over time, he would accumulate 640 acres of land for his plantation.

In 1869, Bruce decided to enter politics. Mentored by Euro-American Republicans, his political rise was swift. He was sergeant at arms in the State Senate, then Sheriff and Tax Collector of Bolivar County in 1871. As Bolivar County Superintendent of Education, he started more schools.

Bruce was elected as a Republican to the United States Senate in 1875 and served to 1881. Although he was the second African American Senator, after fellow Mississippian Hiram Revels, he was the first to serve a full term. When the Democrats gained control of the state in the same year he was elected, Bruce became increasingly isolated politically. However, as a senator, Bruce argued for levee systems and railroad construction, advocated political reform in federal elections, and spoke out for civil rights for African Americans, Native Americans, and Chinese who were becoming a major labor force in the Delta region of the state.

After his Senate term ended Bruce was appointed to three posts by Republican Presidents. President James Garfield named him Register of the Treasury, a post he held until 1885. He served as Recorder of Deeds for the District of Columbia between 1889 and 1893 under Benjamin Harrison. When William McKinley became president in 1897 Bruce was again appointed Register of the Treasury.

Bruce died of diabetes-related complications in Washington, D.C., on March 17, 1898. The 57-year old politician had been married to a teacher named Josephine Beall Wilson. The couple had one son, Roscoe Conkling Bruce, who grew up to become a notable educator.