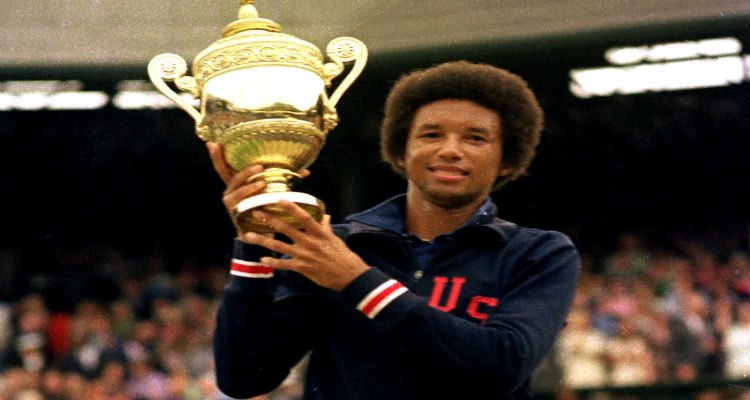 Arthur Ashe is the first African American, and is still the only, African-American male player to win the men’s singles at Wimbledon and the U.S. Open; and the first African American to be ranked No. 1 in the world. Ashe became an AIDS activist after contracting the condition via a blood transfusion, raising awareness of the disease, before finally succumbing to it on February 6, 1993.

Arthur Robert Ashe Jr. was born on July 10, 1943, in Richmond, Virginia, the oldest of Arthur Ashe Sr. and Mattie Cunningham’s two sons. Ashe’s childhood was marked by hardship and opportunity. Under his mother’s direction, Ashe was reading by the age of 4, but his life was turned upside-down two years later, when Mattie passed away. Ashe’s father, a police officer, fearful of seeing his boys fall into trouble without their mother’s discipline, began running a tighter ship at home. Ashe and his younger brother Johnnie went to church every Sunday, and after school were required to come straight home. Arthur Sr. even clocked the distance: “My father … kept me home, out of trouble. I had exactly 12 minutes to get home from school, and I kept to that rule through high school.”

About a year after his mother’s death, Arthur discovered the game of tennis, picking up a racket for the first time at the age of seven. Ashe soon came to the attention of Dr. Walter Johnson who had coached another famous black tennis champion, Althea Gibson. Under his tutelage, Ashe became a strong competitor, ranking fifth in his age group nationally at age 15. But segregation kept him from playing in whites-only tournaments in the south. For his senior year, Ashe moved to St. Louis, Missouri, where he was able to compete against both black and white players. In 1960 and 1961, he competed in the previously segregated U.S. Interscholastic tournament, winning the junior indoor singles title both years. He also graduated first in his high school class.

Ashe then moved west to attend the University of California at Los Angeles on a tennis scholarship. In 1963, at age 20, Ashe became the first African American player named to the U.S. Davis Cup Team. He also played varsity tennis, winning the NCAA men’s singles championship, and leading UCLA to the team title in 1965. Ashe graduated from UCLA the following year with a degree in business administration. From 1966 to 1969, he served in the U.S. Army, but was frequently granted leave for important competitions.

In 1968, at age 25, Ashe defeated Tom Okker of the Netherlands to win the U.S. Open. He was the first black man to win the Open, and this began a long string of important wins. In 1970, Ashe took the Australian Open and was the top-ranked American player, but when he applied for a visa to compete in South Africa, it was denied because of the color of his skin. In protest, he called for South Africa to be expelled from the International Lawn Tennis Association. Three years later, after additional victories including the French Open, Ashe was finally granted a visa. He was the first black pro to play in South Africa’s national championships, and he and Tom Okker won the doubles title. In 1975, Ashe defeated Jimmy Connors to become the first African American man to win at Wimbledon.

The sport of tennis exploded in popularity during this period, but Ashe grew concerned that the amount of money earned by the players remained meager. In response, he and several other players organized the Association of Tennis Professionals, which helped to negotiate a fair distribution of prize money for players. The following year, Ashe met Jeanne Moutoussamy, a professional photographer. The two were married in 1977 at the UN chapel in New York City.

As he aged, Ashe only seemed to improve as a player, winning the doubles championship at the Australian Open when he was 34 years old. But on July 31, 1979, he suffered a heart attack while playing in New York. He was hospitalized for nearly two weeks, and in December of that year, he underwent quadruple bypass surgery. Then, in the spring of 1980, he again suffered chest pains while training and decided to retire from competitive tennis. Not ready to give up his involvement completely, Ashe became captain of the U.S. Davis Cup Team, which he led to victory in 1981 and 1982. But in 1983, he required another double bypass surgery. Although he would not learn it for another five years, a blood transfusion related to this second operation left him infected with HIV.

During his “retirement,” Ashe worked as a television commentator and newspaper columnist, and continued to fight against apartheid. During one protest in Washington, DC, he was arrested outside the South African embassy. Two months after the arrest, in 1985, he became the first black man to be inducted into the International Tennis Hall of Fame. Ashe and his wife welcomed a daughter during this time whom they named Camera Elizabeth. Branching out, Ashe published a three-volume history of African American athletes called A Hard Road to Glory in 1988, which was followed by an Emmy award-winning television version. The same year, however, brought tragedy. Ashe was hospitalized again, and this time, tests revealed the presence of HIV. Stunned, Ashe and his family decided to keep the news private. They succeeded until 1992, when fearing that a newspaper was about to report it, Ashe announced at a news conference that he had AIDS. On World AIDS Day in 1992, Ashe addressed the UN General Assembly, asking them to increase funding for AIDS research. That same month, he was named Sportsman of the Year by Sports Illustrated magazine.

On February 6, 1993, at age 49, Ashe died of AIDS-related pneumonia. His body was transported to Richmond, Virginia, where he lay in state at the Governor’s Mansion and more than 5,000 came to pay their respects. Even after his death, Ashe’s influence remained broad. Months after he passed away, he was honored with a Presidential Medal of Freedom by President Bill Clinton. In 1996, a statue of Ashe was placed among the statues of confederate soldiers that line Monument Avenue in Richmond. Arthur Ashe Stadium, dedicated as part of a $254 million renovation of the National Tennis Center in Flushing Meadows, New York, hosted its first U.S. Open in 1997. And in 2006, the Arthur Ashe Tennis and Education Center opened in East Falls, Pennsylvania. The $12 million facility is dedicated to providing tennis lessons for inner city children of modest means and fostering future champions in the tradition of Ashe himself.