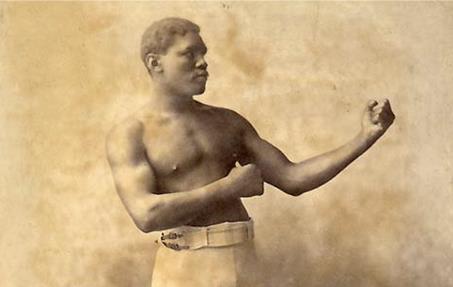 Although Peter Jackson never fought for the heavyweight crown, he is generally regarded as an all-time great. Jackson was a top contender of his day, but was kept from challenging champion John L. Sullivan because of racism.

Jackson was born on July 3, 1861 at Christiansted, St Croix, Virgin Island, West Indies, son of Peter Jackson, warehouseman, and his wife. As a youngster, Jackson moved to Australia. His boxing career began in 1882 in Melbourne, Australia, shortly after he used his fists to put down a shipboard mutiny. The incident was reported in the press and soon boxing promoters were after him.

Between 1883 and 1886 Jackson fought seven times, once with bare knuckles, only losing to the Australian champion Bill Farnham in 1884. After two years as an instructor at Foley’s, he easily won the Australian heavyweight championship from Tom Lees in thirty rounds on 25 September 1886. Jackson’s magnificently trained and proportioned physique, 6 ft 1½ ins (187 cm) tall and weighing 190 lbs (86 kg), gave him a rare combination of speed and strength. An intelligent boxer rather than a slugger, he possessed a marvelous feint, strong jabs and a masterly left-right combination. On 18 April 1888 he left for the United States of America and Britain.

Jackson fought twenty-eight of the best men of England and America between 1888 and 1892, losing to none. The nearest he came to defeat was an eight-round draw in Melbourne on 21 October 1890 against Joe Goddard—he was undertrained and on a lightning visit to his adopted country, where he was fêted and accepted as an Australian. His most memorable fights were the 61-round, four-hour draw with James J. Corbett on 21 May 1891 at San Francisco and the hectic ten-round victory over fellow Australian Frank Slavin on 30 May 1892 in London. Jackson was one of the finest boxers never to fight for a world championship: John Sullivan refused to defend his title against a Black and Corbett avoided Jackson once he gained the heavyweight crown in 1892.

Termed the ‘darkey’ or worse early on, Jackson became known as ‘Peter the Great’ or ‘The Black Prince’. His great sportsmanship and modesty reflected his nature, and also was a role forced on him by the exigencies of a Black fighter in a whyte world. His deference, good looks, fine speaking manner and skill made him universally popular: he was one of the few boxers, Black or whyte, allowed to move freely in the National Sporting Club rooms in London.

Back in England in 1892, Jackson won the British Empire Championship with a second-round knockout of Frank Slavin. In that bout, however, Jackson suffered two broken ribs that punctured a lung. He retired for six years, but staged an ill-fated comeback in 1898. James J. Jefferies and Jim Jefferies knocked him out. Three years later Jackson died of tuberculosis contracted from his 1892 lung injury. He was buried in Toowong Cemetery in the that same city, where friends erected a large monument with the words, ‘This was a man’. Peter Jackson’s lifetime Ring Record was 23-3-5. 17 KO’s.