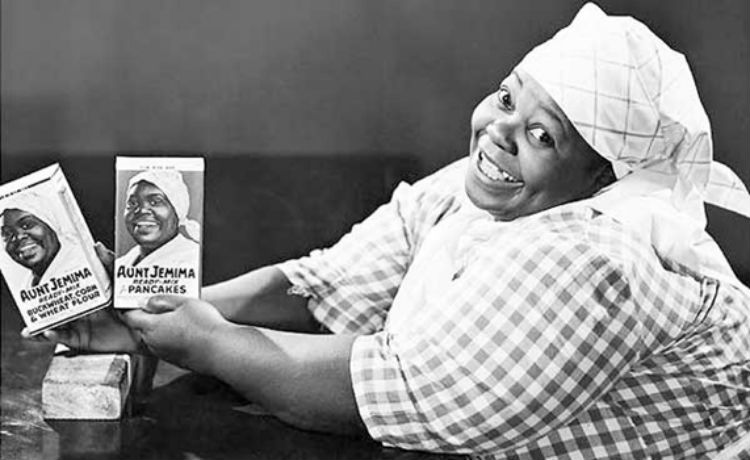 Nancy Green known as the Pancake Queen, was a storyteller, cook, activist, and the first of several African-American models hired to promote a corporate trademark as “Aunt Jemima.” The famous Aunt Jemima recipe was not her recipe but she became the advertising world’s first living trademark.

Green was born into the Maafa (Atlantic slavery) on 17 November 1834 near Mount Sterling in Montgomery County, Kentucky. Chris Rutt, a newspaperman, and Charles Underwood bought the Pearl Milling Company and had the original idea of developing and packaging a ready-mixed, self-rising pancake flour. To survive in a highly competitive business, the men needed an image for their product. In 1889, Rutt attended a vaudeville show where he heard a catchy tune called Aunt Jemima sung by a blackface performer who was wearing an apron and bandanna headband. He decided to call their pancake flour “Aunt Jemima.” Rutt and Underwood were broke, so in 1890, they sold the formula to the R.T. Davis Milling Company. Davis began looking for a Black woman to employ as a living trademark for his product, and he found Nancy Green in Chicago. She was 56 years old.

Davis hired Green to portray Aunt Jemima in ads and at events. Green made her public debut in character at the 1893 World’s Colombian Exposition in Chicago. A gifted storyteller and excellent cook, Green charmed the crowds with stories of her days as an enslaved woman while demonstrating the pancake mix. Mixed in with her true-life stories, were prepared tales to make her look like the originator of the Aunt Jemima pancake mix recipe. Her warm and appealing personality made her the ideal “Aunt Jemima,” and her exhibition booth drew so many people that special policemen were assigned to keep the crowds moving. The Davis Milling Company received over 50,000 orders, and Fair officials awarded Nancy Green a medal and certificate for her showmanship.

After the Expo, Green was offered a lifetime contract to adopt the Aunt Jemima moniker and promote the pancake mix. She became the first living spokesperson for a brand name product. She went on to make thousands of personal appearances across America. So successful was Nancy Green that the company in 1914 renamed itself, the Aunt Jemima Mills Company.

In addition, the Aunt Jemima’s character became so recognizable that a number of companies co-opted the name and the image to promote their own products — everything from flour to cake mix, cornmeal, and pancake syrup. Finally, Davis decided to take his imitators to court; and in 1915, the Aunt Jemima Mills Company filed a suit against Rigney and Company, for using the Aunt Jemima name and an image similar to Green’s portrayal of the character to sell pancake syrup. Davis’ lawyers argued that Rigney’s use of the character “created in the minds of purchasers the belief that the said goods are a product of the plaintiff.” Prior to this case trademark infringement happened when another company was selling the same product under the same name. However, The judge sided with the Aunt Jemima Mills Company and ruled that, while the pancake flour and pancake syrup were not the same product and did not compete with each other, they were related in their uses and consumers could be misled to think they were made by the same company.

The case set a precedent, known as the “Aunt Jemima Doctrine.”

Green’s career allowed her the financial freedom to become an activist. She was one of the first African-American missionary workers. She used her stature as a spokesperson to become a leading advocate against poverty and in favor of equal rights for individuals in Chicago.

Green died on August 30, 1923, in Chicago when a car collided with a truck and flipped over onto the sidewalk where she was standing. She was still working as Aunt Jemima at the time. She is buried in the northeast quadrant of Chicago’s Oak Woods Cemetery. The famous image of Aunt Jemima, which was based on the real image of Nancy Green, sold for $9,030 at MastroNet.

The Davis Company also ran into money problems, and the Quaker Oats Company purchased the Aunt Jemima Mills in 1925.

Wow…very informative. I had no idea about the life & legacy of this woman…beyond the controversial & iconic symbol on a pancake box.