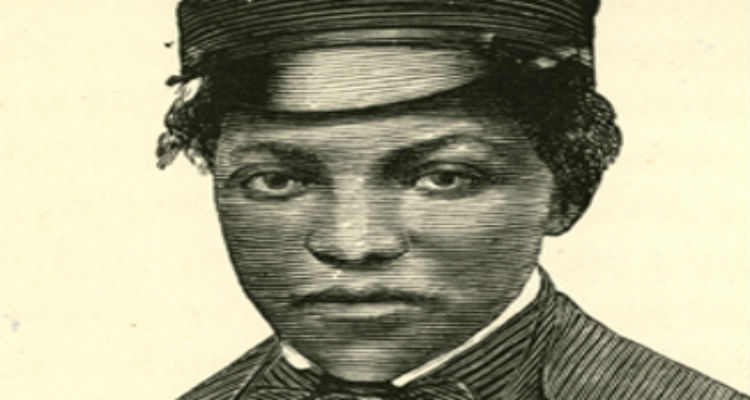 In 1855, Anna Maria Weems escaped to freedom disguised as an enslaved male named “Joe Wright.” This fifteen-year-old young woman had been planning her escape for two years and she waited patiently for the day she reached freedom. The three or four-day journey began in front of the White House and ended at William Still’s home in Philadelphia.

Anna Maria Weems (also known as Ann or Anne) was born into the Maafa slavery about 1840 in Maryland to John and Arabella Talbot Weems. John Weems was a free man of color, but his wife Arabella was enslaved and therefore so were her children. Arabella and her children were enslaved by Adam Robb, a tavern keeper, who lived in Montgomery County. Robb also enslaved Josiah Henson for a short period of time before selling him off to Isaac Riley.

Anna Maria was baptized into the Catholic faith at St. Mary’s Church in Rockville, Maryland. In 1847 Weems enslaver Adam Robb died intestate, leaving the fate of the bondpeople (enslaved Blacks), including the Weems family, to be determined by an appointed trustee. Weems was only five years old at the time her enslaver died. Robb’s estate was divided between his two daughters Jane Robb Beall and Catherine Robb Harding. Weems, her mother and siblings were sent to Robb’s daughter Catherine Harding and her husband Henry. The Harding family were heavily in debt and could not afford to maintain the bondpeople they received.

It seems that Anna Marie Weems was sold to a slave trader, Charles Price, from Montgomery County; about 15 miles from Washington D.C in Rockville Maryland. After seeing three of her brothers sold south, and her mother and one of her sisters be purchased for freedom, Weems understood that one day she wanted to be free as well. Price had been offered $700 for her freedom but had refused. For two straight years Price refused numerous offers to sell Anna Maria; it was clear that her only way to obtain freedom was through the Underground Railroad which was dangerous for her and the “Conductor”.

By the time she was fifteen, Price had become nervous that Anna Maria planned on running away, and as a result of this, he made her sleep beside him and his wife’s bed to ensure that she wouldn’t slip away during the night. The measures of running away were becoming more and more unlikely. The man, J. Bigelow, a lawyer from Washington D.C., who had helped Anna Maria’s family buy their freedom at an earlier time, was set out to help her escape to freedom as well. During the times of the suspicion from Price, Bigelow had been communicating via letters with William Still, a conductor on the Underground Railroad stationed in Philadelphia, about Anna Maria’s anticipated dash for freedom.

In October of 1855, Anna Maria escaped from Price and his wife. Upon leaving the Price residence she went on to Washington D.C., and it is believed that she spent a bit of time with her family that resided there before continuing on to Bigelow’s residence. Due to a $500.00 reward put out by Price to anyone that could bring her back, Ann Maria’s trip was put on hold; she was unable to step foot out of Bigelow’s house, let alone the city. In the ad placed for her capture, Anna Maria is described as a mixed-race with freckles on her face, and thick sandy hair. During the six week waiting period for things to cool down, Bigelow and Still compiled a plan. The plan was that she would dress up as a boy, named “Joe Wright” – she would dress in boy attire; a driver’s uniform, including a jacket, pants, the bow tie, and cap.

Nearing late November, the fuss over Anna Maria’s escape had died down a considerable amount, and a man referred to as “Dr. H”, who was Bigelow’s family physician, had attempted to smuggle her out of the city. The plan had been well thought through; Dr. H. drove his carriage and parked it along the side of the road in front of the White House, climbed into the passenger compartment, and waited for “Mr. Joe Wright” to arrive, escorted by Bigelow. To a lurking eye, they would only assume that Dr. H had just finished doing business within the White House and was now being escorted by his coachman.

Anna Maria, dressed as “Joe Wright”, drove the carriage out of Washington without incident; they had driven for a few days and stopped to rest at the homes of a few of Dr. H’s friends, who were slaveholders. He pretended that “Joe” was his bondman. He also pretended that he had dizzy spells and therefore needed “Joe” to sleep in his own bedroom with him. The dangerous trick worked.

On November 25, 1855, they had reached Pennsylvania where Dr. H had dropped her off in the care of Still’s wife. Still had returned later that afternoon. Numerous people who had come to the Still residence were amazed by Anna Maria’s ingenious disguise. After staying a few days in Philadelphia, she was sent on to Lewis Tappan, of New York. After arriving safely she had found a home and kind friends in the family of Rev. A. N. Freeman.

After leaving New York, Anna Maria and Rev. Freeman went by carriage onward to Canada where she ended up in the Dawn Settlement. Here she was reunited with her aunt and uncle, Mr. and Mrs. Bradley. She had remained in Canada from then on. From there, her aunt and uncle had forwarded her to the Elgin Settlement to attend the Buxton Mission School. She had resided in Buxton after her long, yet famous escape from the Maafa dressed as a young man.

It is unknown when Anne Maria Weems died, but she likely died in Canada.

“Dr. H” was Dr. Ellwood Harvey. He was the Still family physician and was helping to get the first college for female doctors in the world up and running. It was started in 1850 in Philadelphia, the Female Medical College of Pennsylvania, and Dr. Harvey worked there until 1858 when poverty drove him out. In 1855 William Still told him about the plight of Ann Maria Weems. Dr. Harvey said he would rescue her, but couldn’t do it until Thanksgiving break. He took her from in front of the White House up to Still’s house in Philadelphia and then, on the next day, onto Brooklyn.