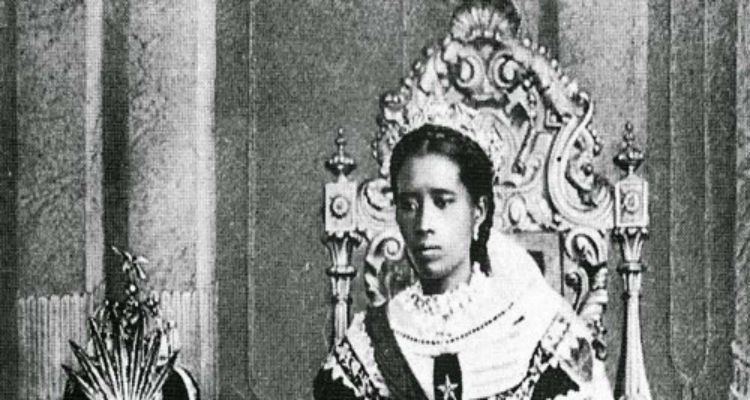 Ranavalona III was the last reigning monarch of the Kingdom of Madagascar. She ruled from July 30, 1883, to February 28, 1897. During her reign, Queen Ranavalona III tried to stop the colonization of Madagascar by both the French and British. Despite her efforts, the French military attack on the country eventually led to the capture of the royal palace in 1895, and the overthrow of the sovereignty and political autonomy of the century-old kingdom. 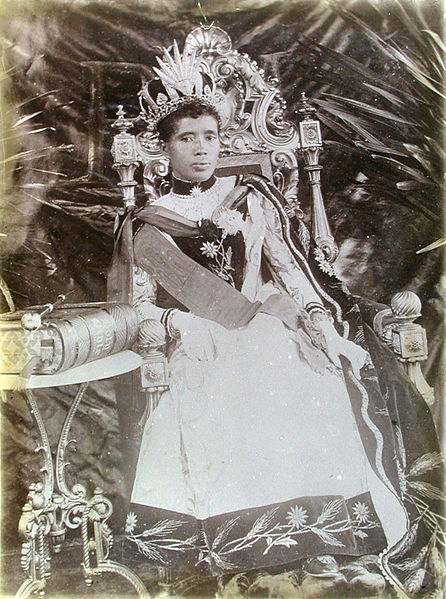 Ranavalona III, daughter of Andriantsimianatra and his wife, Princess Raketaka, was born Princess Razafindrahety on November 22, 1861, at Amparibe, a rural village in the district of Manjakazafy outside Antananarivo. Her lineage, as niece to Queen Ranavalona II and great-granddaughter of King Andrianampoinimerina, qualified Ranavalona lll to potentially inherit the throne of the Kingdom of Madagascar.

When she was old enough to attend school, Ranavalona III was taken into the custody of her aunt, Queen Ranavalona II, who ensured she began receiving a private education. She continued her education throughout her adolescence at the Congregational School of Ambatonakanga, the Friends High School for Girls, and the LMS Girls’ Central School. She was baptized as a Protestant at Ambohimanga on April 5, 1874.

As a young woman, Ranavalona III married an Andriana (nobleman) named Ratrimo (Ratrimoarivony). Her husband died several years later on May 8, 1883, aged 22, leaving her a premature widow. Ranavalona III was proclaimed queen upon the death of her predecessor, Queen Ranavalona II, on July 13, 1883. Her coronation took place on November 22, 1883, her 22nd birthday, where she was given the title “Her Majesty Ranavalona III by the grace of God and the will of the people, Queen of Madagascar, and Protectress of the laws of the Nation.”

Like her two predecessors, Queen Ranavalona III had a political marriage with Prime Minister Rainilaiarivony. Her role was largely ceremonial as nearly all important political decisions continued to be made by the much older and more experienced prime minister. Queen Ranavalona III was frequently called upon to deliver formal speeches (kabary) to the public on behalf of Rainilaiarivony and would make appearances to inaugurate new public buildings, such as a hospital at Isoavinandriana and a girls’ school at Ambodin’Andohalo. Throughout her reign, her aunt, Ramisindrazana, acted as an adviser and exercised considerable influence at court. Her older sister, Rasendranoro was also a close companion.

During her reign, Queen Ranavalona III tried to stave off colonization by strengthening trade and diplomatic relations with the United States and Great Britain. However, despite the queen’s efforts, France officially annexed Madagascar on January 1, 1896. In August, the French officially declared Madagascar to be their colony and exiled Prime Minister Rainilaiarivony to Algiers (in French Algeria) where he died the following year. The queen and much of her administration remained but were afforded no real political power.

In December 1895, popular resistance to French rule emerged in the form of the menalamba (“red shawl”) war. This guerrilla war against foreigners, Christianity, and political corruption quickly spread throughout the island and was principally conducted by peasants who wore shawls smeared with the red laterite soil of the highlands. The resistance movement gained ground until it was defeated by the French military at the end of 1897. Members of the queen’s court were accused of encouraging the warriors and many leading figures were executed, including the queen’s uncle Ratsimamanga and her minister of war, Rainandriamampandry. Ramisindrazana, the queen’s aunt, was exiled to Réunion, as the French were reluctant to execute a woman.

Queen Ranavalona lll was also exiled from Madagascar on February 27, 1897, and the French officially abolished the monarchy the next day. She was first sent to the island of Réunion before being relocated to a villa in Algiers, where she was provided with servants and a French female attendant who kept her under observation and remained present whenever the queen entertained guests in her home. In addition, the government of France initially provided her with an annual allowance of 25,000 francs paid from the budget for the colony of Madagascar and authorized by the colony’s governor-general. Nearly all the queen’s property had been seized by the colonial authority, although she had been permitted to keep certain personal belongings, including some of her jewelry.

Queen Ranavalona lll died without ever having returned to Madagascar, after two formal requests in 1910 and 1912 were refused on the pretext of insufficient funds in the colonial coffers. The exiled queen died suddenly at age 55, on May 23, 1917, the victim of a severe embolism. She was buried at the Saint-Eugene cemetery in Algiers on May 25, but her body was disinterred 21 years later and shipped to Madagascar, where they were placed within the tomb of Queen Rasoherina on the grounds of the Rova of Antananarivo. Her crown is permanently exhibited in Paris, France at the Museum of the Army, which is housed within the French Hôtel National des Invalides National Palace.