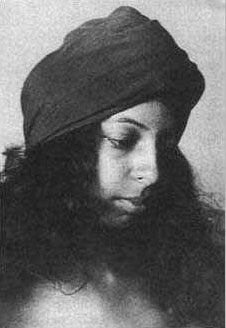 Angelina Weld Grimké was an African-American poet and playwright, an important forerunner of the Harlem Renaissance.

“I oft have dreamed the bliss
Of the nectar in one kiss.”

Grimké was born in Boston, the only child of Archibald Grimké and Sarah Stanley on February 27, 1880. She had a mixed racial background; her father was the son of a  wealthy whyte aristocrat Henry Grimké, and an enslaved black woman, Nancy Weston. Her mother was from a prominent whyte family. Her parents named her after her great aunt Angelina Grimké Weld, a famous whyte abolitionist and women’s rights advocate.

Her father, Archibald Grimke, graduated Harvard Law School and became a prominent lawyer, diplomat, author, editor, publisher and vice president of the NAACP. However, when Grimké was three years old, her mother left her father, taking her daughter with her. After four years she returned Angelina to her father and she never saw her mother again.  It appears that her mother’s middle class whyte family opposed the marriage of Angelina’s parents on racial grounds, and, ultimately, Angelina was abandoned by her mother and was raised solely by her father and some of his relatives. In a letter written to Angelina when she was seven years old, Sarah speaks of wanting to return to visit her daughter, of hearing her cry out “Mamma” in her dreams. “I dream about you very often. The other night–I thought–I saw you out in a large cornfield. . . . Do you ever dream of Mamma?–Some time I shall be able to come to you in my Shadow Body and really see you. How would you like that? And some time we will be together again.”

Grimké was educated at Fairmont Grammar School in Hyde Park (1887-1894), Carleton Academy in Northfield, Minnesota (1895), Cushing Academy in Ashburnham, Massachusetts, and Girls’ Latin School in Boston. In 1902 she took a degree in physical education at the Boston Normal School of Gymnastics (now Wellesley College). She began her teaching career as a gym teacher at Armstrong Manual Training School in Washington, D.C., but eventually became an English teacher, later transferring to Dunbar High School. She supplemented her education with summer courses at Harvard University, finally retiring in 1926.

Grimke began writing while still quite young, and her first published poetry preceded the Harlem Renaissance by thirty years. Although Grimké was called to write, she felt pressure to please her father by not publishing anything that could tarnish the family name. Her best known and most mature work was written and published throughout the 1920’s while she lived in Washington D.C. She was published in The Crisis, Alain Locke’s The New Negro (1925), Countee Cullen’s Caroling Dusk and in Robert Kerlin’s Negro Poets and Their Poems (1928).  Grimke’s wrote 173 poems of which 31 were published. Among them were love poems, elegies, poems concerned with racial injustice and Black pride, nature poems and poems with the universal themes of life and death. Although, little is known of Grimké’s personal relationships, some of her writings indicated that she was a lesbian. Her diary includes entries about her female lovers.

Her most well-known work was a play, Rachel, which she wrote in response to W. E. B. DuBois’s requests for Black theater by, for, and about Black people. Rachel, produced in 1916 and published in 1920, concerns a young woman who is so horrified by racism that she vows never to bring children into the world. Although the play is considered to be overly sentimental and was criticized for its defeatism, it was one of the first plays written by a Black author about Black issues.

Alain Locke, in Plays of Negro Life (1927), said of Rachel, “Apparently the first successful drama written by a Negro and interpreted by Negro actors.” And the NAACP production program said of the play, “This is the first attempt to use the stage for race propaganda in order to enlighten the American people relating to the lamentable condition of ten millions of Colored citizens in this free republic.”

And, in her short story The Closing Door, Grimké reveals the feelings of loneliness and isolation she felt after her mother left her. The main character in the story is a fifteen year old girl who is also left by her mother. She is shuffled from foster home to foster home, ending up with a woman whom she loves as a mother and who loves her. The story does not have a happy ending, however, because the mother figure dies, leaving the main character exactly as she was at the beginning.

In her lifetime Grimké wrote many works  but very little of her work was published. The times were not friendly to a person such as  Grimke. Not only was it difficult for a Black woman to be published, but the fact that she was a Black lesbian woman at a time when such sexuality was not spoken of or in any way acceptable made it that much more difficult with regard to publication. Grimké left voluminous personal papers and unpublished works behind, including a play entitled Mara and a collection of poems called Dusk Dreams. The poems are such detailed works of love and passion that literary historians believe she was afraid to publish for fear of the scandal that might be cast on her family.

In 1930, after her father died, Angelina Grimke moved to New York and published nothing more. She lived there in seclusion and died on June 10, 1958.

Grimke published before the Renaissance began and is therefore looked upon as a forerunner of the the cultural, social, and artistic explosion that took place in Harlem between the end of the First World War and the middle of the 1930s. Alain Locke acknowledged her role as a significant transitional figure, as a pioneer and path-breaker from whom the “artistic vanguard” inherited “fine and dearly bought achievements”.