Rachel, a Play in Three Acts 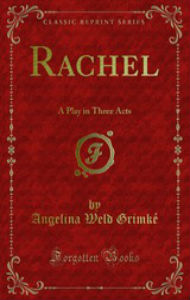 Rachel (1916) was one of the earliest American plays written for Blacks. The play, a three-act anti-lynching drama was sponsored by the National Association for the Advancement of Colored People (NAACP), which had called for new works to rally public opinion against the recently released racist film, The Birth of a Nation (1915). Directed by D. W. Griffith, it glorified the Ku Klux Klan and portrayed a racist view of Blacks and of their role in the American Civil War and Reconstruction in the South.  In the production program of the play the NAACP qualifies Rachel as unprecedented, “This is the first attempt to use that stage for race propaganda in order to enlighten the American people relating to the lamentable condition of ten millions of colored citizens in this free republic.”

A success, Rachel was the first full length drama composed by a Black female American and the first performed by an all Black cast in March of 1916. Published in 1920, it offered a bleak perspective on the fate of Black children in a racist society. The play’s domestic setting features a widowed seamstress, Mrs. Loving, and her son, Tom, and daughter, Rachel. Mrs. Loving tells her children about the mob murder of her oldest child, George, and her husband, a newspaper publisher. Mrs. Loving words enlighten Rachel about racism and its impact on the family. By age 22, Rachel loses hope of rearing her own family, experiencing a depression that manifest itself in visions. “I am afraid to go to sleep for every time I do, my children come an beg me, weeping, not to bring them here to suffer.”

“The first full-length anti-Lynching play, Rachel was first performed in 1919 in Washington, D. C. and published in 1920. It is the story of the after effects of a lynching on the Loving family. The setting is the Loving family apartment, which is loving and happy, in spite of the shadow lynching casts over them. The primary action is Rachel’s personal movement from wanting children to a decision to not marry and give birth to children because they will, she believes, suffer a similar fate of her father and half-brother. Mr. Loving and little George were lynched in the South (George was only 7 yrs old) and Mrs. Loving took the remaining two children, Rachel and Tom, to the north afterward. Even though they are in the North, they still feel the effects of racial discrimination. Neither Tom nor Rachel can get jobs, and their friend, Mr. John Strong, who is college-educated, only finds work as a waiter. After she learns about her father and brother’s murders, she talks with her mother about the futility of marriage for her. She says at the end of Act 1: “Then, everywhere, everywhere, throughout the South, there are hundreds of dark mothers who live in fear, terrible, suffocating fear, whose rest by night is broken, and whose joy by day in their babies on their hearts is three parts — pain. Oh, I know this is true — for this is the way I should feel, if I were little Jimmy’s mother. How horrible ! Why — it would be more merciful — to strangle the little things at birth. And so this nation — this white Christian nation — has deliberately set its curse upon the most beautiful — the most holy thing in life — motherhood ! Why — it — makes — you doubt — God !” (p. 28).” —Larisa Asaeli. To read the full review, click here.