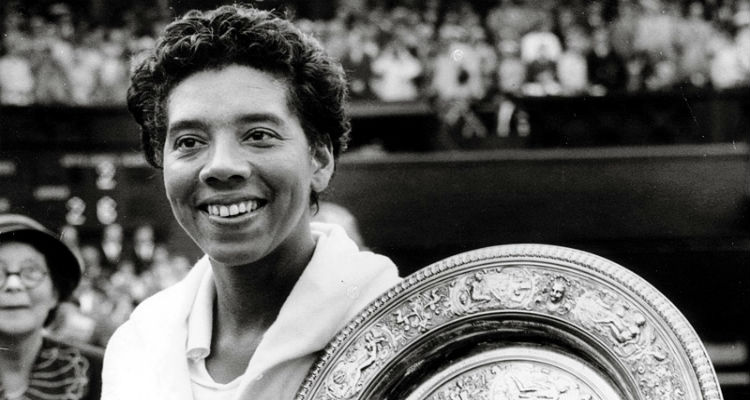 “I Always Wanted to Be Somebody.”

Althea Gibson was the first African American tennis player to win a Grand Slam title (the French Open). In 1957, she also won both Wimbledon and the U.S. Nationals (precursor of the U.S. Open), and won both again in 1958. Gibson was voted Female Athlete of the Year by the Associated Press in both years. In all, she won 11 Grand Slam tournaments, including six doubles titles, and was inducted into the International Tennis Hall of Fame and the International Women’s Sports Hall of Fame.

Althea Gibson was born on August 25, 1927 in the small rural town of Silver, South Carolina, the eldest child of Daniel and Annie Gibson. She spent the first three years of her life on a cotton farm, where her sharecropper parents struggled to make ends meet. When her mother’s sister, Sally Washington, came south from New York, to attend another sister’s funeral, her parents decided to send the three-year-old to live in New York City with her. Her parents followed a few months later, moving into Washington’s apartment. Washington had sold bootleg whiskey out of her apartment. Her business brought in a substantial income, but it created an unstable environment in which to raise children. Gibson uncles and their friends would often give her alcohol and more than once she would end up drunk. Concerned about their daughter, when she was about seven or eight, her parent sent her to live with another aunt in Philadelphia. The change of scene had little effect on the mischievous Gibson, who gave her aunt “plenty of trouble,” for the next two years.

When Gibson was nine she returned to New York to live with her parents, who had moved into an apartment of their own in Harlem. By now the family included three more girls and a boy, While her siblings were well behaved, as she got older, Gibson started “getting into real trouble.” Gibson disliked school and became a chronic truant. She missed more days of school than she attended. At home she was disobedient and took countless whippings from her father. Discipline seemed to have a reverse effect, however, as she became more defiant. She stole food from stands on the street, played hooky to go to the movie and once stole a bicycle and sold it. She frequently stayed away from home for days at a time to avoid punishment. Eventually her father gave up on corporal punishment and taught her how to box to protect herself on the streets.

As she grew older, Gibson had to defend herself-and sometimes her family-against various bullies and gang members. Once she found one of her uncles “lolling on the stairs” of her aunt’s apartment building, “slightly intoxicated.” A leader of a local gang, the Sabres, was in the process of robbing him. Gibson pushed the youth aside and helped her uncle up, but he threw a sharpened screwdriver at her, gashing her hand. After removing her uncle from harm’s way, Gibson “went back down after that boy and we had a fight that they still talk about on 144th Street. We fought all over the block.” They fought to a draw and “were both pretty bloody and bruised” before some adults broke it up. After that, according to Gibson, no one in Harlem “ever tried to use me for a dart board again.”

Gibson’s skill as a fighter reflected the competitiveness and athletic ability that made her a familiar figure on Harlem’s playgrounds. She enjoyed sports partly because she excelled at each one she tired. Her favorite was basketball but it was paddle tennis that started her on the way to her destiny. Displaying an awesome talent, she was given a tennis racquet by Buddy Walker, a musician known as Harlem’s Society Orchestra Leader. Walker arranged to take her to the Harlem River Tennis Courts. Her natural talent for the game was so obvious that “a lot of the other players on the courts stopped their games to watch me.” One of those players was Juan Serrell, a teacher who belonged to the Cosmpolitan Club, New York’s most prestigious Black tennis club. He was so impressed, he made arrangements for her to play with the club’s professional. After watching her play a few sets with Fred Johnson, the club members took up a collection and bought her a membership. She began taking regular lessons from Johnson.

At the Cosmpolitan Club, Gibson discovered a whole new world. Her benefactors, she wrote, were, “the highest class of Harlem people and they had rigid ideas about what was socially acceptable behavior.” She accepted the discipline of the club but off the court she “was still living pretty wild.” She dropped out of high school, left home briefly to live in a children’s shelter and did a series of menial jobs to earn spending money. Unwilling to cope with the restrictions at the shelter she returned home. Unable to accept the responsibilities of a job, she gave up working, and “just stayed on the streets.” The city welfare department caught up with her and rented a room for her with a stable family.

Gradually as she became more involved in tennis, her personal life grew more orderly. She began to set her sights on becoming the best tournament player she could be. A year after she started lessons with Johnson, he entered her in her first tournament, the ATA’s New York State Open Championship, which she won. Later that summer, she went to the ATA’s national girls’ championship at Lincoln University in Pennsylvania, where she made it all the way to the finals before losing. She eventually won the 1944 girl’s division title and repeated her success in 1945.

When Gibson turned 18 in August 1945, her life changed. She could no longer receive welfare support and took a job as a waitress. She moved in with her best friend, Gloria. They spent their evenings bowling and playing basketball. One evening at a bowling alley, Gloria introduced Gibson to Sugar Ray Robinson and his wife Edna. They all became close friends and Gibson spent most of her free time with the couple, often sleeping in their apartment and accompanying them on trips to the country, where Sugar Ray Robinson trained. Gibson thrived on the affection and attention they gave her and took Robinson as a role model. “I worshipped Sugar Ray Robinson…because he was somebody. I was determined that I was going to be somebody-if it killed me.” It was the Robinsons who persuaded Gibson to move South, to live with Dr Eaton and his family in Wilmington, North Carolina, during the school year, to attend high school and practice her tennis on his court.

Just after her 19th birthday she boarded a train at Pennsylvania Station in Manhattan and headed south. Gibson graduated from high school in Wilmington, North Carolina and college at Florida A&M at 21 and 26, respectively.

Her mentors thought that after winning the national Black women’s tournament twice, it was fitting that Gibson now take her game, which was a “combination of deftness and power,” to the US Nationals. At that time tennis, like the rest of society, was segregated, and Gibson was barred from entering the tournaments sponsored by the leading body, the United States Lawn Tennis Association. Alice Marble, a whyte four-time single winner at Forest Hills, intervened on her behalf and she was allowed to compete.

Her historic debut at Forest Hills in 1950 was against Louise Brough, who had won the previous three Wimbledons. After being thrashed 6-1 in the first set, Gibson won the second set 6-3 and was leading 7-6 in the third when a thunderstorm halted play. On resumption of play the next day Gibson’s game fell apart.

In 1957 and 1958 she reigned supreme, ranking number 1 in the world and voted Female Athlete of the Year by the Associated Press. Her bumper year was in 1957: she won Wimbledon and the US title, adding the women’s doubles at the former and the mixed doubles at the latter. At Wimbledon, the United Press reported that “Althea had command of her game right from the start. The rangy New Yorker with the best serve in women’s tennis dropped her service only once.” In 1958, she repeated at Wimbledon and at Forest Hills, where she also won her third Grand Slam women’s doubles title.

Despite her success on the court, the specter of segregation hounded her. She was still barred from some clubs where prestigious tournaments were played.

After retiring from tennis, Gibson toured with the Harlem Globetrotters, playing exhibition games to open for the basketball troupe. In 1964, she then turned to professional golf, joining the Ladies Professional Golf Association. In 1971, she was inducted into the International Tennis Hall of Fame. In its inaugural year of 1980, she was inducted into the International Women’s Sports Hall of Fame.

Author’s note: I was named for Althea Gibson. In my family, it is a tradition that the first-born child’s name must begin with “A”. Therefore, I was named Althea by my aunt, after Althea Gibson, so she would be a source of inspiration over my life (I was told over and over again, in childhood, the reason why I was named, Althea). Like my namesake, I was the eldest in my family, a tom-boy and fighter, and loved sports, especially track & field (I was born in Kingston, Jamaica). I was “pretty wild” and was told many times that I needed to be tamed. Unlike my namesake, I loved school, because I had a passion for knowledge/history. In primary school, I learned about the National Heroes of Jamaica and was taken to the Arawak Museum. My love for history grew from there and throughout High school I was never seen without a book. I eventually changed my name by deed poll, hence, the reason I am now Meserette Kentake. However, if I do for Black history, what Althea Gibson did for tennis, then I would have lived up to the ideals of my birth.

The Art of Hale Woodruff