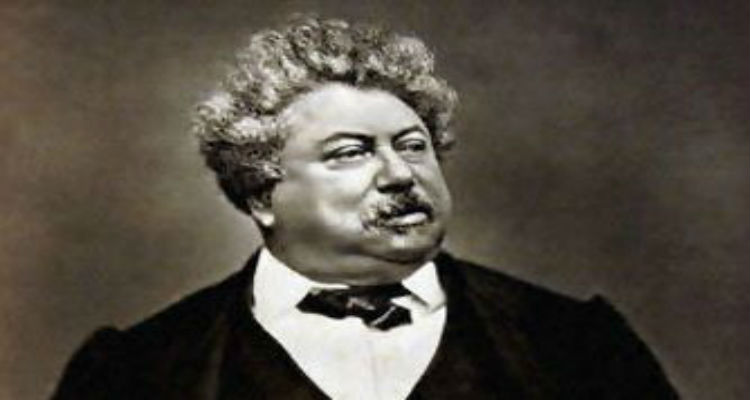 Alexandre Dumas is a celebrated French author best known for his historical adventure novels, including The Three Musketeers and The Count of Monte Cristo. Dumas published works comprise 300 volumes and 100,000 pages, and have been translated into nearly 100 languages. His novels have been adapted since the early twentieth century for nearly 200 films. Alexandre Dumas in his time was, arguably, the most famous Frenchman in the world.

Alexandre Dumas was born Dumas Davy de la Pailleterie on July 24, 1802, in Villers-Cotterêts, France, to Marie Louise Labouret and General Thomas-Alexandre Davy de la Pailleterie. The Dumas family name was adopted from Alexandre’s grandmother, an enslaved Haitian woman named Marie-Césette Dumas. Thomas-Alexandre took the name Dumas when he enlisted in Napoleon’s army, where he acquired the dubious nickname “Black Devil.” Thomas-Alexandre rose to the rank of general at the age of 31, the highest rank of any Black man in a European army. He served, with distinction, in Italy and Egypt and rose to command forces 50,000 strong. However, Thomas-Alexandre left the armed forces following a disagreement with Napoleon over his Egypt campaign. He was imprisoned for nearly two years and died shortly after his release. After her husband’s death, Marie Louise Labouret worked hard to provide an education for her son. Dumas attended Abbé Grégoire’s school before dropping out to take a job assisting a local notary.

In 1822, Dumas moved to Paris and immersed himself in literature. He worked as a scribe for the duc d’Orléans (later named King Louis Philippe) during the 1830 revolution. He began writing plays, both comedies and dramas. Dumas’s Romantic style—often compared to that of his contemporary and rival, Victor Hugo—proved to be exceptionally popular.

Though he continued to write plays, Dumas next shift his attention from the theatre to lucrative serial fiction – feuilletons – for the new mass-market Parisian press. The best known of his works are Les Trois Mousquetaires (published 1844, performed 1845; “The Three Musketeers”), a romance about four swashbuckling heroes in the age of Cardinal Richelieu; and Le Comte de Monte Cristo (1844–45; The Count of Monte Cristo). These novels made Dumas a household name in France and a popular author throughout much of Europe.

With the money he earned from publishing his novels, Dumas purchased land and built the Château de Monte Cristo in Port Marly, Yvelines, France. This home (which is now a museum) was intended to be a sanctuary for the author, and he spent much of his time writing and entertaining there. However in 1848, having squandered the fortune made from writing on high living and women Dumas was forced to sell the property for just 31,000 francs. He fled his remaining creditors and went into exile in Belgium in 1851. Upon leaving Belgium, Dumas moved to Russia for a few years, before going to Italy. In 1861 he founded and published the newspaper, L’ Indipendente, which supported the Italian unification effort. In 1864 he returned to Paris.

Though married, in the tradition of Frenchmen of higher social class, Dumas had numerous affairs (allegedly as many as forty). He was known to have at least four illegitimate or “natural” children, including a boy named Alexandre Dumas after him. This son became a successful novelist and playwright, and was known as Alexandre Dumas, fils (son), while the elder Dumas became conventionally known in French as Alexandre Dumas, père (father). Among his affairs, in 1866 Dumas had one with Adah Isaacs Menken, an American actress then less than half his age and at the height of her career. Twentieth-century scholars have found that Dumas fathered another three “natural” children.

Despite Dumas’ aristocratic background and personal success, the writer had to deal with discrimination related to his mixed-race ancestry. In 1843 he wrote a short novel, Georges, that addressed some of the issues of race and the effects of colonialism. His response to a man who insulted him about his African ancestry has become famous. Dumas said:

At his death in December 1870, Dumas was originally buried at his birthplace of Villers-Cotterêts. In 2002 for the bicentennial of Dumas’ birth, the French President, Jacques Chirac, had a ceremony honoring the author by having his ashes reinterred at the mausoleum of the Panthéon of Paris, where many French luminaries were buried. The proceedings were televised: the new coffin was draped in a blue velvet cloth and carried on a caisson flanked by four mounted Republican Guards costumed as the four Musketeers. It was transported through Paris to the Panthéon. In his speech, President Chirac said: “With you, we were D’Artagnan, Monte Cristo, or Balsamo, riding along the roads of France, touring battlefields, visiting palaces and castles—with you, we dream.”

In 1970, the Alexandre Dumas Paris Métro station was named in his honour. His country home outside Paris, the Château de Monte-Cristo, has been restored and is open to the public as a museum.

Researchers have continued to find Dumas works in archives, including the five-act play, The Gold Thieves, found in 2002 by the scholar Reginald Hamel in the Bibliothèque Nationale de France. It was published in France in 2004 by Honoré-Champion.

Frank Wild Reed (1874-1953) was a busy Whangārei pharmacist who never visited France yet he amassed the greatest collection of books and manuscripts relating to Dumas outside of France. It contains about 3350 volumes, including some 2000 sheets in Dumas’ hand-writing and dozens of French, Belgian and English first editions. This collection was donated to Auckland Libraries after his death.

In June 2005, Dumas’ last novel, The Knight of Sainte-Hermine, was published in France. Featuring the Battle of Trafalgar, Dumas described a fictional character killing Lord Nelson. (Nelson was shot and killed by an unknown sniper.) Writing and publishing the novel serially in 1869, Dumas had nearly finished it before his death. It was the third part of the Sainte-Hermine trilogy.