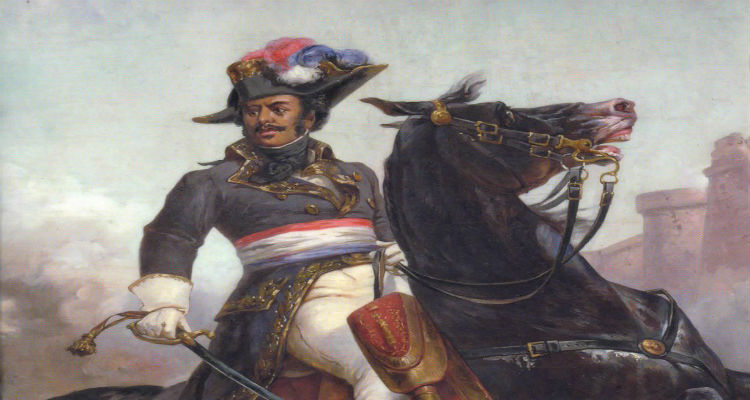 [dropcap size=small]G[/dropcap]eneral Thomas Alexandre Dumas, called “Alexandre the Greatest” was the highest-ranking Black man of all time in a continental European army. He was the first Black man in the French military to become brigadier general, the first to become divisional general, and the first to become general-in-chief of a French army. Dumas shared the status of the highest-ranking Black officer in the Western world only with Toussaint Louverture, until 1975, when Daniel “Chappie” James Jr became a four star General in the United States Air Force. This rank is the closest American equivalent of Général d’Armée, Dumas’ highest rank.

General Dumas was born in on 25 March 1762 in Saint-Domingue (Haiti), the son of a plantation enslaver, Alexander-Antoine Davy de la Pailleterie and an African woman, Marie-Cessette Dumas. His father took him to France in 1776 and had him educated. The Maafa/Atlantic slavery was illegal in metropolitan France and thus any person in bondage would be freed de facto by being in the country.

A dispute broke out between Dumas and his father regarding his inheritance, which led to Dumas breaking off relationship with his father. Therefore, in 1786, he enlisted in the army. Dumas played a pivotal role in the French Revolutionary Wars. Entering the military as a private at age 24, he rose by age 31 to command 53,000 troops as the General-in-Chief of the French Army of the Alps.  Dumas’ courage and strength was legendary. He once captured thirteen enemy soldiers by himself. He also led four men on horseback into enemy territory and captured 16 more prisoners. It was recorded that he led a small group of men up icy cliffs at night to surprise and defeat an Austrian troop. Dumas, referred to as the leader of the “The Black Legion,” protected the French borders against Germany.

Eventually he joined Napoleon Bonaparte in Italy and later in Egypt. Dumas served as commander of the French cavalry forces on the Expédition d’Égypte, a failed attempt by the French to conquer Egypt and the Levant. On the march from Alexandria to Cairo, he clashed verbally with Napoleon Bonaparte, questioning his policies. The break between them was permanent. Dumas was despatched to France, captured during the journey and taken prisoner and thrown into a dungeon. He languished there until the spring of 1801. Freed after 20 months he was lame, deaf in one ear, partly paralysed and penniless.

Returning to France after his release, he and his wife had a son, Alexandre Dumas pere (who became one of France’s most widely read authors of all time). General Dumas struggled to support his family and repeatedly wrote to Napoleon Bonaparte, seeking back-pay for his time lost in Taranto and a new commission in the military. He died of stomach cancer  on 26 February 1806 in Villers-Cotterêts.

At his death his family were plunged into deeper poverty. Dumas’ wife, Marie-Louise, had to work in a tobacconist’s shop to make ends meet, and persistently lobbied the French government to be paid her military widow’s pension. Alexandre Dumas pere adored his father. When told that his father been taken away by God, the four-year-old Dumas angrily declared his intention of going up to heaven and demanding satisfaction. Although the young Alexandre Dumas was unable to get even a basic secondary education, he would eventually produced more than 250 literary works including plays and novels. He fictionalise many of his father’s real-life exploits in his famous novel The Three Musketeers.

“By immortalizing his father in legend, the son not only makes the family name immortal; he becomes one of the most celebrated French writers in history.” (Henry Louis Gates)