Alexander H. Johnson enlisted at the age of 16 as a drummer boy in the Massachusetts 54th Regiment. He was the first Black musician to enlist during the Civil War and is depicted as the drummer leading the column of troops on the memorial honoring Robert Gould Shaw and the 54th in front of the Massachusetts statehouse in Boston. Alex was adopted by William Henry Johnson, the second Black lawyer in the United States and close associate of Frederick Douglass. 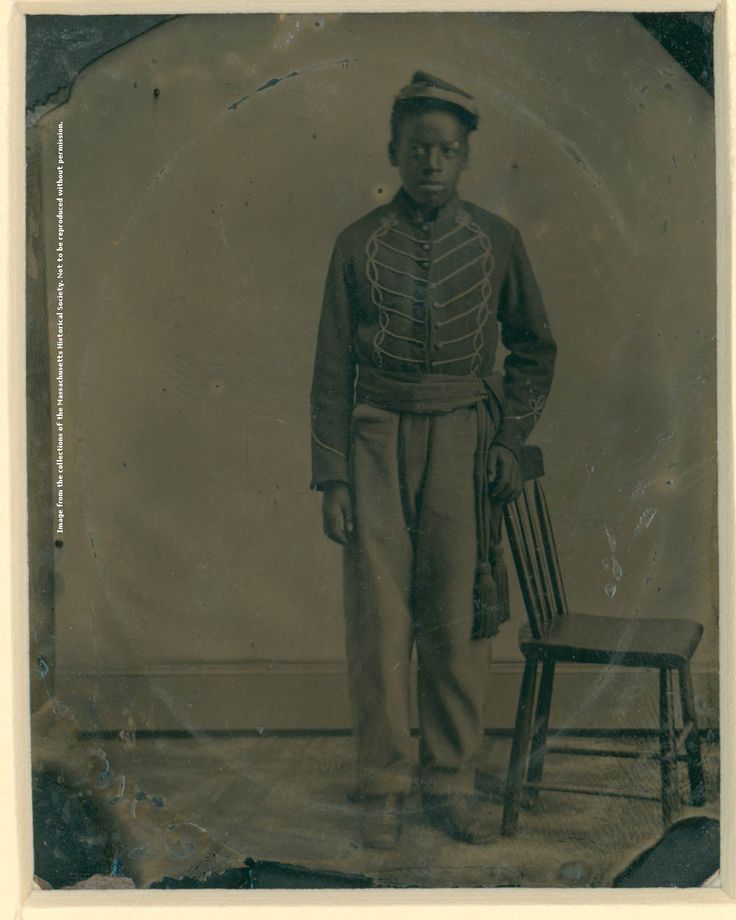 Johnson enlisted as a musician on March 2, 1863. During the war, he was called “the original drummer boy,” by Robert Gould Shaw, the colonel and commander of the 54th. Johnson is recognized as the first Black musician to enlist in the Army during the war, though technically he was not the first; at least three others enlisted as musicians in the regiment before he did.

Johnson told an interviewer that he had “beat a drum every day he has been able since childhood.” Born Alexander Howard in New Bedford, he was separated from his parents before his fifth birthday. Orphaned and alone, his plight came to the attention of William Henry Johnson, an influential local Black man, who adopted him and raised him as his own child.

When the war came, the elder Johnson became a staunch advocate for the service of African-Americans in the Union Army. His pro-military attitude most likely influenced his adopted son’s decision to enlist in the 54th. Young Johnson quickly established himself as a talented drummer as he and the rest of the rank and file learned the art of soldiering. He was with the unit when it left Boston for James Island, S.C., where it fought its first battle.

The skirmish, along the South Carolina coast near Charleston, occurred on July 16, 1863. Johnson noted, “We fought from 7 in the morning to 4:30 in the afternoon, and we succeeded in driving the enemy back. After the battle we got a paper saying that if Fort Wagner was charged within a week it would be taken.”

Two days later the 54th stormed Confederate-held Fort Wagner on Morris Island. Johnson recounted, “Most of the way we were singing, Col. Shaw and I marching at the head of the regiment. It was getting dark when we crossed the bridge to Morris Island. It was about 6:30 o’clock when we got there. Col. Shaw ordered me to take a message back to the quartermaster at the wharf, who had charge of the commissary. I took the letter by the first boat, as ordered, and when I returned I found the regiment lying down, waiting for orders to charge. The order to charge was given at 7:30 o’clock.”

The fighting raged for almost an hour before the regiment was forced to withdraw. The 54th suffered 272 killed, wounded and missing out of the 600 who participated in the charge. “It was a hard fight,” Johnson observed. “We lost our good colonel.”

The 54th forever distinguished itself that day. It proved to all Americans that Black men could fight on par with, and possessed moral courage equal to, the bravest whyte soldier.  Johnson remained in the 54th until the end of the war. In the summer of 1865 he returned to Massachusetts, bringing the drum that he carried at Fort Wagner with him.

Four years later he married, settled in Worcester, Mass., and organized “Johnson’s Drum Corps.” He led the band as drum major, and styled himself “The Major.”

In 1897, a memorial to the 54th sculpted by the artist Augustus Saint-Gaudens was unveiled in Boston. The bronze relief depicts Colonel Shaw and his men leaving Boston for the South with a young drummer in the lead — a scene reminiscent of the July day in 1863 when Shaw and Johnson marched at the head of the 54th to its destiny at Fort Wagner.

In 1904, Johnson visited the monument during an event hosted by the Grand Army of the Republic, the influential association of Union veterans. He pointed out the resemblance of the young lead drummer to himself to those gathered around him. All agreed that the likeness was very noticeable. This was, however, only a coincidence, as Saint-Gaudens based the figures of the African-Americans on hired models.

The drum carried by Johnson at Wagner remained in his possession as late as 1907, and he undoubtedly still owned it upon his death in 1930 at age 83.